Pest control refers to the regulation or management of a species
Species
In biology, a species is one of the basic units of biological classification and a taxonomic rank. A species is often defined as a group of organisms capable of interbreeding and producing fertile offspring. While in many cases this definition is adequate, more precise or differing measures are...
defined as a pest, usually because it is perceived to be detrimental to a person's health
Health
Health is the level of functional or metabolic efficiency of a living being. In humans, it is the general condition of a person's mind, body and spirit, usually meaning to be free from illness, injury or pain...
, the ecology
Ecology
Ecology is the scientific study of the relations that living organisms have with respect to each other and their natural environment. Variables of interest to ecologists include the composition, distribution, amount , number, and changing states of organisms within and among ecosystems...
or the economy
Economics
Economics is the social science that analyzes the production, distribution, and consumption of goods and services. The term economics comes from the Ancient Greek from + , hence "rules of the house"...
.

Pest control is at least as old as agriculture
Agriculture
Agriculture is the cultivation of animals, plants, fungi and other life forms for food, fiber, and other products used to sustain life. Agriculture was the key implement in the rise of sedentary human civilization, whereby farming of domesticated species created food surpluses that nurtured the...
, as there has always been a need to keep crops free from pests. In order to maximize food production, it is advantageous to protect crops from competing species of plants, as well as from herbivore
Herbivore
Herbivores are organisms that are anatomically and physiologically adapted to eat plant-based foods. Herbivory is a form of consumption in which an organism principally eats autotrophs such as plants, algae and photosynthesizing bacteria. More generally, organisms that feed on autotrophs in...
s competing with humans.

The conventional approach was probably the first to be employed, since it is comparatively easy to destroy weeds by burning them or plowing them under, and to kill larger competing herbivores, such as crows and other birds eating seeds
Seed predation
Seed predation, often referred to as granivory, is a type of plant-animal interaction in which granivores feed on the seeds of plants as a main or exclusive food source, in many cases leaving the seeds damaged and not viable...
. Techniques such as crop rotation
Crop rotation
Crop rotation is the practice of growing a series of dissimilar types of crops in the same area in sequential seasons.Crop rotation confers various benefits to the soil. A traditional element of crop rotation is the replenishment of nitrogen through the use of green manure in sequence with cereals...
, companion planting
Companion planting
Companion planting is the planting of different crops in proximity , on the theory that they assist each other in nutrient uptake, pest control, pollination, and other factors necessary to increasing crop productivity...
(also known as intercropping or mixed cropping), and the selective breeding
Selective breeding
Selective breeding is the process of breeding plants and animals for particular genetic traits. Typically, strains that are selectively bred are domesticated, and the breeding is sometimes done by a professional breeder. Bred animals are known as breeds, while bred plants are known as varieties,...
of pest-resistant cultivars  have a long history.

In the UK, following concern about animal welfare, humane pest control and deterrence is gaining ground through the use of animal psychology rather than destruction. For instance, with the urban Red Fox
Red Fox
The red fox is the largest of the true foxes, as well as being the most geographically spread member of the Carnivora, being distributed across the entire northern hemisphere from the Arctic Circle to North Africa, Central America, and the steppes of Asia...
which territorial behaviour is used against the animal, usually in conjunction with non-injurious chemical repellents. In rural areas of Britain, the use of firearms for pest control is quite common. Airguns are particularly popular for control of small pests such as rats, rabbits and grey squirrels, because of their lower power they can be used in more restrictive spaces such as gardens, where using a firearm would be unsafe.

Chemical pesticides date back 4,500 years, when the Sumerians used sulfur
Sulfur
Sulfur or sulphur is the chemical element with atomic number 16. In the periodic table it is represented by the symbol S. It is an abundant, multivalent non-metal. Under normal conditions, sulfur atoms form cyclic octatomic molecules with chemical formula S8. Elemental sulfur is a bright yellow...
compounds as insecticides. The Rig Veda, which is about 4,000 years old, also mentions the use of poisonous plants for pest control. It was only with the industrialization and mechanization
Mechanization
Mechanization or mechanisation is providing human operators with machinery that assists them with the muscular requirements of work or displaces muscular work. In some fields, mechanization includes the use of hand tools...
of agriculture in the 18th and 19th century, and the introduction of the insecticides pyrethrum
Pyrethrum
Pyrethrum refers to several Old World plants of the genus Chrysanthemum which are cultivated as ornamentals for their showy flower heads. Pyrethrum is also the name of a natural insecticide made from the dried flower heads of C. cinerariifolium and C...
and derris
Derris
Derris is a climbing leguminous plant of Southeast Asia and the southwest Pacific islands, including New Guinea. Its roots contain rotenone, a strong insecticide and fish poison....
that chemical pest control became widespread. In the 20th century, the discovery of several synthetic insecticide
Insecticide
An insecticide is a pesticide used against insects. They include ovicides and larvicides used against the eggs and larvae of insects respectively. Insecticides are used in agriculture, medicine, industry and the household. The use of insecticides is believed to be one of the major factors behind...
s, such as DDT
DDT
DDT is one of the most well-known synthetic insecticides. It is a chemical with a long, unique, and controversial history....
, and herbicide
Herbicide
Herbicides, also commonly known as weedkillers, are pesticides used to kill unwanted plants. Selective herbicides kill specific targets while leaving the desired crop relatively unharmed. Some of these act by interfering with the growth of the weed and are often synthetic "imitations" of plant...
s boosted this development. Chemical pest control is still the predominant type of pest control today, although its long-term effects led to a renewed interest in traditional and biological pest control
Biological pest control
Biological control of pests in agriculture is a method of controlling pests that relies on predation, parasitism, herbivory, or other natural mechanisms...
towards the end of the 20th century. 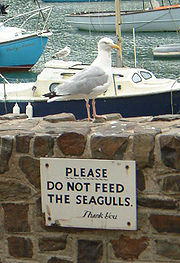 Many pests have only become a problem because of the direct actions of humans. Modifying these actions can often substantially reduce the pest problem. In the United States
United States
The United States of America is a federal constitutional republic comprising fifty states and a federal district...
, raccoon
Raccoon
Procyon is a genus of nocturnal mammals, comprising three species commonly known as raccoons, in the family Procyonidae. The most familiar species, the common raccoon , is often known simply as "the" raccoon, as the two other raccoon species in the genus are native only to the tropics and are...
s caused a nuisance by tearing open refuse sacks. Many householders introduced bins with locking lids, which deterred the raccoons from visiting. House flies tend to accumulate wherever there is human activity and is virtually a global phenomenon, especially where food or food waste is exposed. Similarly, seagulls have become pests at many seaside resorts. Tourists would often feed the birds with scraps of fish and chips
Fish and chips
Fish and chips is a popular take-away food in the United Kingdom, Australia, New Zealand and Canada...
, and before long, the birds would become dependent on this food source and act aggressively towards humans.

Proper waste management and drainage of still water, eliminates the breeding ground of many pests.

Garbage provides food and shelter for many unwanted organisms, as well as an area where still water might collect and be used as a breeding ground by mosquitoes. Communities that have proper garbage collection and disposal, have far less of a problem with rats, cockroaches, mosquitoes, flies and other pests than those that don't.

Open air sewers are ample breeding ground for various pests as well. By building and maintaining a proper sewer system, this problem is eliminated.

Poisoned bait is a common method for controlling rat populations, however is not as effective when there are other food sources around, such as garbage. Poisoned meats have been used for centuries for killing off wolves, birds that were seen to threaten crops, and against other creatures.
this tool is also used to manage several caterpillars eg.Spodoptera litura,fruit flies,snails and slugs,crabs etc..

Traditionally, after a sugar cane harvest, the fields are all burned, to kill off any insects or eggs that might be in the fields.

Historically, in some European countries, when stray dogs and cats became too numerous, local populations gathered together to round up all animals that did not appear to have an owner and kill them. In some nations, teams of rat catchers work at chasing rats from the field, and killing them with dogs and simple hand tools. Some communities have in the past employed a bounty system, where a town clerk will pay a set fee for every rat head brought in as proof of a rat killing.

Traps have been used for killing off mice found in houses, for killing wolves, and for capturing raccoons and stray cats and dogs for disposal by town officials.

Spraying poisons by planes, hand held units, or trucks that carry the spraying equipment, is a common method of pest control. Throughout the United States of America, towns often drive a town owned truck around once or twice a week to each street, spraying for mosquitoes. Crop dusters commonly fly over farmland and spray poison to kill off pest that would threaten the crops. Many find spraying poison around their yard, homes, or businesses, far more desirable than allowing insects to thrive there.

A project that involves a structure be covered or sealed airtight followed by the introduction of a penetrating, deadly gas at a killing concentration a long period of time (24-72hrs.). Although expensive, space fumigation
Fumigation
Fumigation is a method of pest control that completely fills an area with gaseous pesticides—or fumigants—to suffocate or poison the pests within. It is utilized for control of pests in buildings , soil, grain, and produce, and is also used during processing of goods to be imported or...
targets all life stages of pests.

A long term project involving fogging or misting type applicators. Liquid insecticide is dispersed in the atmosphere within a structure. Treatments do not require the evacuation or airtight sealing of a building, allowing most work within the building to continue but at the cost of the penetrating effects. Contact insecticides are generally used, minimizing the long lasting residual effects. On August 10, 1973, the Federal Register
Federal Register
The Federal Register , abbreviated FR, or sometimes Fed. Reg.) is the official journal of the federal government of the United States that contains most routine publications and public notices of government agencies...
printed the definition of Space treatment as defined by the U.S. Environmental Protection Agency‎ (EPA):

Laboratory studies conducted with U-5897 (3-chloro-1,2-propanediol) where attempted in the early 1970s although these proved unsuccessful. Research into sterilization bait is ongoing.

The United States Environmental Protection Agency‎ agrees, noting in its Proposed Risk Mitigation Decision for Nine Rodenticides that “without habitat modification to make areas less attractive to commensal rodents, even eradication will not prevent new populations from recolonizing the habitat.”