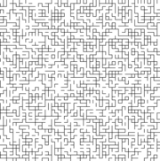 Encyclopedia
In mathematics
Mathematics
Mathematics is the study of quantity, space, structure, and change. Mathematicians seek out patterns and formulate new conjectures. Mathematicians resolve the truth or falsity of conjectures by mathematical proofs, which are arguments sufficient to convince other mathematicians of their validity...
, percolation theory describes the behavior of connected
Glossary of graph theory
Graph theory is a growing area in mathematical research, and has a large specialized vocabulary. Some authors use the same word with different meanings. Some authors use different words to mean the same thing. This page attempts to keep up with current usage....
clusters in a random graph
Random graph
In mathematics, a random graph is a graph that is generated by some random process. The theory of random graphs lies at the intersection between graph theory and probability theory, and studies the properties of typical random graphs.-Random graph models:...
. The applications of percolation theory to materials science
Materials science
Materials science is an interdisciplinary field applying the properties of matter to various areas of science and engineering. This scientific field investigates the relationship between the structure of materials at atomic or molecular scales and their macroscopic properties. It incorporates...
and other domains are discussed in the article percolation
Percolation
In physics, chemistry and materials science, percolation concerns the movement and filtering of fluids through porous materials...
.

As is quite typical, it is actually easier to examine infinite networks than just large ones. In this case the corresponding question is: does an infinite open cluster exist? That is, is there a path of connected points of infinite length "through" the network? By Kolmogorov's zero-one law
Kolmogorov's zero-one law
In probability theory, Kolmogorov's zero-one law, named in honor of Andrey Nikolaevich Kolmogorov, specifies that a certain type of event, called a tail event, will either almost surely happen or almost surely not happen; that is, the probability of such an event occurring is zero or one.Tail...
, for any given p, the probability that an infinite cluster exists is either zero or one. Since this probability is an increasing function of p (proof via coupling
Coupling (probability)
In probability theory, coupling is a proof technique that allows one to compare two unrelated variables by "forcing" them to be related in some way.-Definition:...
argument), there must be a critical p (denoted by pc) below which the probability is always 0 and above which the probability is always 1. In practice, this criticality is very easy to observe. Even for n as small as 100, the probability of an open path from the top to the bottom increases sharply from very close to zero to very close to one in a short span of values of p. 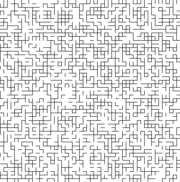 In some cases pc may be calculated explicitly. For example, for the square lattice
Square lattice
In mathematics, the square lattice is a type of lattice in a two-dimensional Euclidean space. It is the two-dimensional version of the integer lattice. It is one of the five types of two-dimensional lattices as classified by their symmetry groups; its symmetry group is known symbolically as p4m.Two...
Z2 in two dimensions, pc = 1/2, a fact which was an open question for more than 20 years and was finally resolved by Harry Kesten
Harry Kesten
Harry Kesten is an American mathematician best known for his work in probability, most notably on random walks and percolation theory.- Biography :...
in the early 1980s, see . A limit case for lattices in many dimensions is given by the Bethe lattice
Bethe lattice
A Bethe lattice or Cayley tree , introduced by Hans Bethe in 1935, is a connected cycle-free graph where each node is connected to z neighbours, where z is called the coordination number. It can be seen as a tree-like structure emanating from a central node, with all the nodes arranged in shells...
, whose threshold is at pc = 1/(z − 1) for a coordination number
Coordination number
In chemistry and crystallography, the coordination number of a central atom in a molecule or crystal is the number of its nearest neighbours. This number is determined somewhat differently for molecules and for crystals....
z. For most infinite lattice graphs, pc cannot be calculated exactly. For example, pc is not known for bond-percolation in hypercubic lattice in two dimensions.

The universality principle
Universality (dynamical systems)
In statistical mechanics, universality is the observation that there are properties for a large class of systems that are independent of the dynamical details of the system. Systems display universality in a scaling limit, when a large number of interacting parts come together...
states that the value of pc is connected to the local structure of the graph, while the behavior of clusters below, at, and above pc are invariant with respect to the local structure, and therefore, in some sense are more natural quantities to consider.
This universality also means that for the same dimension independent of the type of the lattice or type of percolation (e.g., bond or site) the fractal dimension
Fractal dimension
In fractal geometry, the fractal dimension, D, is a statistical quantity that gives an indication of how completely a fractal appears to fill space, as one zooms down to finer and finer scales. There are many specific definitions of fractal dimension. The most important theoretical fractal...
of the clusters at pc is the same.

The main fact in the subcritical phase is "exponential decay". That is, when p < pc, the probability that a specific point (for example, the origin) is contained in an open cluster of size r decays to zero exponentially in r. This was proved for percolation in three and more dimensions by and independently by . In two dimensions, it formed part of Kesten's proof that pc = 1/2.

The dual graph
Dual graph
In mathematics, the dual graph of a given planar graph G is a graph which has a vertex for each plane region of G, and an edge for each edge in G joining two neighboring regions, for a certain embedding of G. The term "dual" is used because this property is symmetric, meaning that if H is a dual...
of the square lattice Z2 is also the square lattice. It follows that, in two dimensions, the supercritical phase is dual to a subcritical percolation process. This provides essentially full information about the supercritical model with d = 2. The main result for the supercritical phase in three and more dimensions is that, for sufficiently large N, there is an infinite open cluster in the two-dimensional slab Z2 × [0, N]d−2. This was proved by .

The model has a singularity
Mathematical singularity
In mathematics, a singularity is in general a point at which a given mathematical object is not defined, or a point of an exceptional set where it fails to be well-behaved in some particular way, such as differentiability...
at the critical point p = pc believed to be of power-law type. Scaling theory predicts the existence of critical exponents, depending on the number d of dimensions, that determine the class of the singularity. When d = 2 these predictions are backed up by arguments from quantum field theory
Quantum field theory
Quantum field theory provides a theoretical framework for constructing quantum mechanical models of systems classically parametrized by an infinite number of dynamical degrees of freedom, that is, fields and many-body systems. It is the natural and quantitative language of particle physics and...
and quantum gravitation, and include predicted numerical values for the exponents. Most of these predictions are conjectural except when the number d of dimensions satisfies either d = 2 or d ≥ 19. They include:

In dimension 2, the first fact ("no percolation in the critical phase") is proved for many lattices, using duality. Substantial progress has been made on two-dimensional percolation through the conjecture of Oded Schramm
Oded Schramm
Oded Schramm was an Israeli-American mathematician known for the invention of the Schramm–Loewner evolution and for working at the intersection of conformal field theory and probability theory.-Biography:...
that the scaling limit
Scaling limit
In physics or mathematics, the scaling limit is a term applied to the behaviour of a lattice model in the limit of the lattice spacing going to zero. A lattice model which approximates a continuum quantum field theory in the limit as the lattice spacing goes to zero corresponds to finding a second...
of a large cluster may be described in terms of a Schramm–Loewner evolution. This conjecture was proved by in the special case
of site percolation on the triangular lattice.