Encyclopedia
Peppermint is a hybrid mint
Mentha
Mentha is a genus of flowering plants in the family Lamiaceae . The species are not clearly distinct and estimates of the number of species varies from 13 to 18. Hybridization between some of the species occurs naturally...
, a cross between the watermint (Mentha aquatica) and spearmint
Spearmint
Mentha spicata syn. M. cordifolia is a species of mint native to much of Europe and southwest Asia, though its exact natural range is uncertain due to extensive early cultivation. It grows in wet soils...
(Mentha spicata). The plant, indigenous to Europe, is now widespread in cultivation throughout all regions of the world. It is found wild occasionally with its parent species.

Peppermint was first described in 1753 by Carolus Linnaeus
Carolus Linnaeus
Carl Linnaeus , also known after his ennoblement as , was a Swedish botanist, physician, and zoologist, who laid the foundations for the modern scheme of binomial nomenclature. He is known as the father of modern taxonomy, and is also considered one of the fathers of modern ecology...
from specimens that had been collected in England; he treated it as a species
Species
In biology, a species is one of the basic units of biological classification and a taxonomic rank. A species is often defined as a group of organisms capable of interbreeding and producing fertile offspring. While in many cases this definition is adequate, more precise or differing measures are...
, but it is now universally agreed to be a hybrid.

It is a herbaceous
Herbaceous
A herbaceous plant is a plant that has leaves and stems that die down at the end of the growing season to the soil level. They have no persistent woody stem above ground...
rhizomatous perennial plant
Perennial plant
A perennial plant or simply perennial is a plant that lives for more than two years. The term is often used to differentiate a plant from shorter lived annuals and biennials. The term is sometimes misused by commercial gardeners or horticulturalists to describe only herbaceous perennials...
growing to 30–90 cm (11.8–35.4 in) tall, with smooth stems, square in cross section. The rhizome
Rhizome
In botany and dendrology, a rhizome is a characteristically horizontal stem of a plant that is usually found underground, often sending out roots and shoots from its nodes...
s are wide-spreading, fleshy, and bare fibrous root
Root
In vascular plants, the root is the organ of a plant that typically lies below the surface of the soil. This is not always the case, however, since a root can also be aerial or aerating . Furthermore, a stem normally occurring below ground is not exceptional either...
s. The leaves
Leaf
A leaf is an organ of a vascular plant, as defined in botanical terms, and in particular in plant morphology. Foliage is a mass noun that refers to leaves as a feature of plants....
are from 4–9 cm (1.6–3.5 in) long and 1.5–4 cm (0.590551181102362–1.6 in) cm broad, dark green with reddish veins, and with an acute apex and coarsely toothed margins. The leaves and stems are usually slightly hairy. The flower
Flower
A flower, sometimes known as a bloom or blossom, is the reproductive structure found in flowering plants . The biological function of a flower is to effect reproduction, usually by providing a mechanism for the union of sperm with eggs...
s are purple, 6–8 mm (0.236220472440945–0.31496062992126 in) long, with a four-lobed corolla about 5 mm (0.196850393700787 in) diameter; they are produced in whorls (verticillasters) around the stem, forming thick, blunt spikes. Flowering is from mid to late summer. The chromosome
Chromosome
A chromosome is an organized structure of DNA and protein found in cells. It is a single piece of coiled DNA containing many genes, regulatory elements and other nucleotide sequences. Chromosomes also contain DNA-bound proteins, which serve to package the DNA and control its functions.Chromosomes...
number is variable, with 2n counts of 66, 72, 84, and 120 recorded.

Peppermint typically occurs in moist habitats, including stream sides and drainage ditches. Being a hybrid, it is usually sterile
Infertility
Infertility primarily refers to the biological inability of a person to contribute to conception. Infertility may also refer to the state of a woman who is unable to carry a pregnancy to full term...
, producing no seed
Seed
A seed is a small embryonic plant enclosed in a covering called the seed coat, usually with some stored food. It is the product of the ripened ovule of gymnosperm and angiosperm plants which occurs after fertilization and some growth within the mother plant...
s and reproducing only vegetatively
Vegetative reproduction
Vegetative reproduction is a form of asexual reproduction in plants. It is a process by which new individuals arise without production of seeds or spores...
, spreading by its rhizomes. If placed, it can grow anywhere, with a few exceptions.

Outside of its native range, areas where peppermint was formerly grown for oil often have an abundance of feral plants, and it is considered invasive
Invasive species
"Invasive species", or invasive exotics, is a nomenclature term and categorization phrase used for flora and fauna, and for specific restoration-preservation processes in native habitats, with several definitions....
in Australia
Australia
Australia , officially the Commonwealth of Australia, is a country in the Southern Hemisphere comprising the mainland of the Australian continent, the island of Tasmania, and numerous smaller islands in the Indian and Pacific Oceans. It is the world's sixth-largest country by total area...
, the Galápagos Islands
Galápagos Islands
The Galápagos Islands are an archipelago of volcanic islands distributed around the equator in the Pacific Ocean, west of continental Ecuador, of which they are a part.The Galápagos Islands and its surrounding waters form an Ecuadorian province, a national park, and a...
, New Zealand
New Zealand
New Zealand is an island country in the south-western Pacific Ocean comprising two main landmasses and numerous smaller islands. The country is situated some east of Australia across the Tasman Sea, and roughly south of the Pacific island nations of New Caledonia, Fiji, and Tonga...
, and in the United States
United States
The United States of America is a federal constitutional republic comprising fifty states and a federal district...
. in the Great Lakes
Great Lakes
The Great Lakes are a collection of freshwater lakes located in northeastern North America, on the Canada – United States border. Consisting of Lakes Superior, Michigan, Huron, Erie, and Ontario, they form the largest group of freshwater lakes on Earth by total surface, coming in second by volume...
region, noted since 1843.

Peppermint generally grows best in moist, shaded locations, and expands by underground stolons. Young shoots are taken from from old stocks and dibbled into the ground about 1.5 feet apart. They grow quickly and cover the ground with runners if it is permanently moist. For the home gardener, it is often grown in containers to restrict rapid spreading. It grows best with a good supply of water, without being water-logged, and planted in areas with part-sun to shade.

The leaves and flowering tops are used; they are collected as soon as the flowers begin to open and can be dried. The wild form of the plant is less suitable for this purpose, with cultivated plants having been selected for more and better oil content. They may be allowed to lie and wilt a little before distillation, or they may be taken directly to the still. 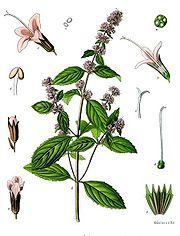 Peppermint has a long tradition of medicinal use, with archaeological evidence placing its use at least as far back as ten thousand years ago. 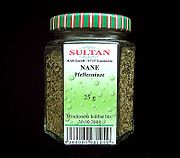 The aroma of peppermint has been found to enhance memory
Memory
In psychology, memory is an organism's ability to store, retain, and recall information and experiences. Traditional studies of memory began in the fields of philosophy, including techniques of artificially enhancing memory....
. As such, it can be administered by instructors to their students before examinations, to aid recall.

Peppermint flowers are large nectar producers and honey bee
Honey bee
Honey bees are a subset of bees in the genus Apis, primarily distinguished by the production and storage of honey and the construction of perennial, colonial nests out of wax. Honey bees are the only extant members of the tribe Apini, all in the genus Apis...
s as well as other nectar harvesting organisms forage them heavily. A mild, pleasant varietal honey
Honey
Honey is a sweet food made by bees using nectar from flowers. The variety produced by honey bees is the one most commonly referred to and is the type of honey collected by beekeepers and consumed by humans...
can be produced if there is a sufficient area of plants.

In 2007, Italian investigators reported that 75% of the patients in their study who took peppermint oil capsules for four weeks had a major reduction in irritable bowel syndrome
Irritable bowel syndrome
Irritable bowel syndrome is a diagnosis of exclusion. It is a functional bowel disorder characterized by chronic abdominal pain, discomfort, bloating, and alteration of bowel habits in the absence of any detectable organic cause. In some cases, the symptoms are relieved by bowel movements...
(IBS) symptoms, compared with just 38% of those who took a placebo
Placebo
A placebo is a simulated or otherwise medically ineffectual treatment for a disease or other medical condition intended to deceive the recipient...
. A second study in 2010, conducted in Iran, found similar results. 2011 research showed that peppermint acts through a specific anti-pain channel called TRPM8 to reduce pain sensing fibres. The authors feel that this study provides information that is potentially the first step in determining a new type of mainstream clinical treatment for Irritable Bowel Syndrome.

Similarly, some poorly designed earlier trials found that peppermint oil has the ability to reduce colicky abdominal pain due to IBS with an NNT
Number needed to treat
The number needed to treat is an epidemiological measure used in assessing the effectiveness of a health-care intervention, typically a treatment with medication. The NNT is the average number of patients who need to be treated to prevent one additional bad outcome...
(number needed to treat) around 3.1, but the oil is an irritant to the stomach in the quantity required and therefore needs wrapping for delayed release in the intestine. This could also be achieved by using the whole herb or leaves rather than the volatile components alone. Peppermint relaxes the gastro-esophageal sphincter, thus promoting belching.

The toxicity studies of the plant have received controversial results. Some authors reported that the plant may induce hepatic diseases (liver disease), while others found that it protects against liver damage that is caused by heavy metals. In addition to that, the toxicities of the plant seem to vary from one cultivar to another and are dose dependent. This is probably attributed from the content level of pulegone
Pulegone
Pulegone is a naturally occurring organic compound obtained from the essential oils of a variety of plants such as Nepeta cataria , Mentha piperita, and pennyroyal. It is classified as a monoterpene....
.

A number of cultivar
Cultivar
A cultivar'Cultivar has two meanings as explained under Formal definition. When used in reference to a taxon, the word does not apply to an individual plant but to all those plants sharing the unique characteristics that define the cultivar. is a plant or group of plants selected for desirable...
s have been selected for garden use:

Commercial cultivars may include


Standardization of its products and services