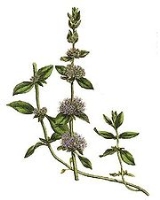 Pennyroyal was commonly used as a cooking herb by the Greeks and Romans. The ancient Greeks often flavored their wine with pennyroyal. A large number of the recipes in the Roman cookbook of Apicius
Apicius
Apicius is the title of a collection of Roman cookery recipes, usually thought to have been compiled in the late 4th or early 5th century AD and written in a language that is in many ways closer to Vulgar than to Classical Latin....
call for the use of pennyroyal, often along with such herbs as lovage
Lovage
Lovage is a tall perennial plant, the sole species in the genus Levisticum, in the family Apiaceae, subfamily Apioideae, tribe Apieae.-Distribution:...
, oregano
Oregano
Oregano – scientifically named Origanum vulgare by Carolus Linnaeus – is a common species of Origanum, a genus of the mint family . It is native to warm-temperate western and southwestern Eurasia and the Mediterranean region.Oregano is a perennial herb, growing from 20–80 cm tall,...
and coriander
Coriander
Coriander is an annual herb in the family Apiaceae. Coriander is native to southern Europe and North Africa to southwestern Asia. It is a soft, hairless plant growing to tall. The leaves are variable in shape, broadly lobed at the base of the plant, and slender and feathery higher on the...
. Although still commonly used for cooking in the Middle Ages, it gradually fell out of use as a culinary herb and is seldom used so today.

Even though pennyroyal oil is extremely poisonous, people have relied on the fresh and dried herb for centuries. Early settlers in colonial Virginia used dried pennyroyal to eradicate pests. Pennyroyal was such a popular herb that the Royal Society published an article on its use against rattlesnakes in the first volume of its Philosophical Transactions in 1665.

Pennyroyal tea
Tisane
A herbal tea, tisane, or ptisan is a herbal or plant infusion and usually not made from the leaves of the tea bush . Typically, herbal tea is simply the combination of boiling water and dried fruits, flowers or herbs. Herbal tea has been imbibed for nearly as long as written history extends...
is the use of an infusion
Infusion
An infusion is the outcome of steeping plants with desired chemical compounds or flavors in water or oil.-History:The first recorded use of essential oils was in the 10th or 11th century by the Persian polymath Avicenna, possibly in The Canon of Medicine.-Preparation techniques:An infusion is very...
made from the herb. The infusion is widely reputed as safe to ingest in restricted quantities. It has been traditionally employed and reportedly successful as an emmenagogue
Emmenagogue
Emmenagogues are herbs which stimulate blood flow in the pelvic area and uterus; some stimulate menstruation. Women have used plants such as mugwort, parsley and ginger to prevent or terminate early pregnancy...
(menstrual flow stimulant) or as an abortifacient
Abortifacient
An abortifacient is a substance that induces abortion. Abortifacients for animals that have mated undesirably are known as mismating shots....
. Pennyroyal is also used to settle an upset stomach and to relieve flatulence. The fresh or dried leaves of pennyroyal have also been used when treating colds, influenza, abdominal cramps, and to induce sweating, as well as in the treatment of diseases such as smallpox and tuberculosis, and in promoting latent menstruation. Pennyroyal leaves, both fresh and dried, are especially noted for repelling insects. However, when treating infestations such as fleas, using the plant's essential oil should be avoided due to its toxicity to both humans and animals, even at extremely low levels. 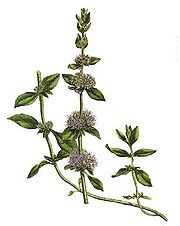 Pennyroyal essential oil
Essential oil
An essential oil is a concentrated hydrophobic liquid containing volatile aroma compounds from plants. Essential oils are also known as volatile oils, ethereal oils or aetherolea, or simply as the "oil of" the plant from which they were extracted, such as oil of clove...
is extremely concentrated. It should never be taken internally because it is highly toxic; even in small doses, consumption of the oil can result in death. The metabolite menthofuran is thought to be the major toxic agent. Complications have been reported from attempts to use the oil for self-induced abortion
Self-induced abortion
A self-induced abortion is an abortion performed by the pregnant woman herself outside the recognized medical system. Although the term can include abortions induced through legal, over-the-counter medication, it also refers to efforts to terminate a pregnancy through alternative, often more...
. For example, in 1978 an eighteen year-old pregnant woman from Denver, Colorado died within one week after consuming one ounce of concentrated Pennyroyal oil in an attempt to self-induce abortion. There are numerous studies that show the toxicity of pennyroyal oil to both humans and animals.


Attributed and possible contributions to death

In the Homeric Hymn of Demeter
Demeter
In Greek mythology, Demeter is the goddess of the harvest, who presided over grains, the fertility of the earth, and the seasons . Her common surnames are Sito as the giver of food or corn/grain and Thesmophoros as a mark of the civilized existence of agricultural society...
, Demeter in the guise of an old woman as she searches for the abducted Persephone
Persephone
In Greek mythology, Persephone , also called Kore , is the daughter of Zeus and the harvest-goddess Demeter, and queen of the underworld; she was abducted by Hades, the god-king of the underworld....
refuses red wine but accepts a drink of barley, water and pennyroyal called kykeon
Kykeon
Kykeon was an Ancient Greek drink made mainly of water, barley and naturally occurring substances. It was used at the climax of the Eleusinian Mysteries to break a sacred fast, but it was also a favourite drink of Greek peasants.Kykeon is mentioned in Homeric texts: the Iliad describes it as...
.

Aristophanes
Aristophanes
Aristophanes , son of Philippus, of the deme Cydathenaus, was a comic playwright of ancient Athens. Eleven of his forty plays survive virtually complete...
made reference to pennyroyal as abortifacient
Abortifacient
An abortifacient is a substance that induces abortion. Abortifacients for animals that have mated undesirably are known as mismating shots....
in Lysistrata
Lysistrata
Lysistrata is one of eleven surviving plays written by Aristophanes. Originally performed in classical Athens in 411 BC, it is a comic account of one woman's extraordinary mission to end The Peloponnesian War...
and Peace
Peace (play)
Peace is an Athenian Old Comedy written and produced by the Greek playwright Aristophanes. It won second prize at the City Dionysia where it was staged just a few days before the ratification of the Peace of Nicias , which promised to end the ten year old Peloponnesian War...
. Mari Sandoz
Mari Sandoz
Mari Susette Sandoz was a novelist, biographer, lecturer, and teacher. She was one of Nebraska's foremost writers, and wrote extensively about pioneer life and the Plains Indians, and has been occasionally referred to as Mari S...
writes in her book, Slogum House, "She was the fifth of twelve children in the river-bottom family, with a mother who laid the cards and brewed tansy, pennyroyal and like concoctions for luckless girls who were in need."

The grunge
Grunge
Grunge is a subgenre of alternative rock that emerged during the mid-1980s in the American state of Washington, particularly in the Seattle area. Inspired by hardcore punk, heavy metal, and indie rock, grunge is generally characterized by heavily distorted electric guitars, contrasting song...
band Nirvana
Nirvana (band)
Nirvana was an American rock band that was formed by singer/guitarist Kurt Cobain and bassist Krist Novoselic in Aberdeen, Washington in 1987...
recorded a song named "Pennyroyal Tea."
Pennyroyal Tea
"Pennyroyal Tea" is a song by the American grunge band Nirvana. Featured on the band's third and final studio album, In Utero , it was initially scheduled to be released as the third single in April 1994...

In the Science Fiction book "The Technician" by Neal Asher, Penny Royal is the name of rogue black AI.