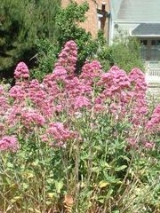 Overview
A perennial plant or simply perennial (Latin per, "through", annus, "year") is a plant
Plant
Plants are living organisms belonging to the kingdom Plantae. Precise definitions of the kingdom vary, but as the term is used here, plants include familiar organisms such as trees, flowers, herbs, bushes, grasses, vines, ferns, mosses, and green algae. The group is also called green plants or...
that lives for more than two years. The term is often used to differentiate a plant from shorter lived annuals
Annual plant
An annual plant is a plant that usually germinates, flowers, and dies in a year or season. True annuals will only live longer than a year if they are prevented from setting seed...
and biennials
Biennial plant
A biennial plant is a flowering plant that takes two years to complete its biological lifecycle. In the first year the plant grows leaves, stems, and roots , then it enters a period of dormancy over the colder months. Usually the stem remains very short and the leaves are low to the ground, forming...
. The term is sometimes misused by commercial gardeners or horticulturalists to describe only herbaceous
Herbaceous
A herbaceous plant is a plant that has leaves and stems that die down at the end of the growing season to the soil level. They have no persistent woody stem above ground...
perennials. More correctly, woody plant
Woody plant
A woody plant is a plant that uses wood as its structural tissue. These are typically perennial plants whose stems and larger roots are reinforced with wood produced adjacent to the vascular tissues. The main stem, larger branches, and roots of these plants are usually covered by a layer of...
s like shrub
Shrub
A shrub or bush is distinguished from a tree by its multiple stems and shorter height, usually under 5–6 m tall. A large number of plants may become either shrubs or trees, depending on the growing conditions they experience...
s and tree
Tree
A tree is a perennial woody plant. It is most often defined as a woody plant that has many secondary branches supported clear of the ground on a single main stem or trunk with clear apical dominance. A minimum height specification at maturity is cited by some authors, varying from 3 m to...
s are also perennials.

Perennials, especially small flowering plant
Flowering plant
The flowering plants , also known as Angiospermae or Magnoliophyta, are the most diverse group of land plants. Angiosperms are seed-producing plants like the gymnosperms and can be distinguished from the gymnosperms by a series of synapomorphies...
s, grow and bloom over the spring and summer and then die back every autumn and winter, then return in the spring from their root-stock rather than seeding themselves as an annual plant
Annual plant
An annual plant is a plant that usually germinates, flowers, and dies in a year or season. True annuals will only live longer than a year if they are prevented from setting seed...
does.

How does perennial plants increase in diameter?

How do I know if the perennial plants I planted last year made it threw the hard winter?I dont see any signs of my black -eyed susen,hollyhocks,foxglo...

How is carbon sequestrated in a perrenial crop culture

Why do perennial crops survive during dry periods?

Could anyone please describe what is meant by the following terms a) juvenility, b) maturity and c) senescence, and explain the horticultural signific...
More
x