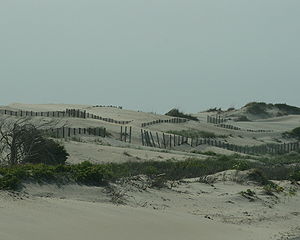 The refuge's objectives are to provide nesting, resting, and wintering habitat for migratory birds
Bird migration
Bird migration is the regular seasonal journey undertaken by many species of birds. Bird movements include those made in response to changes in food availability, habitat or weather. Sometimes, journeys are not termed "true migration" because they are irregular or in only one direction...
, including the greater snow geese
Snow Goose
The Snow Goose , also known as the Blue Goose, is a North American species of goose. Its name derives from the typically white plumage. The genus of this bird is disputed...
and other migratory waterfowl
Waterfowl
Waterfowl are certain wildfowl of the order Anseriformes, especially members of the family Anatidae, which includes ducks, geese, and swans....
, shorebirds, wading birds, raptor
Bird of prey
Birds of prey are birds that hunt for food primarily on the wing, using their keen senses, especially vision. They are defined as birds that primarily hunt vertebrates, including other birds. Their talons and beaks tend to be relatively large, powerful and adapted for tearing and/or piercing flesh....
s, and neotropical migrants, as well as habitat and protection for endangered
Endangered species
An endangered species is a population of organisms which is at risk of becoming extinct because it is either few in numbers, or threatened by changing environmental or predation parameters...
and threatened species. Objectives also include providing opportunities for public enjoyment of wildlife and wildlands resources. Public use programs focus on interpretation, environmental education, wildlife observation, wildlife photography
Photography
Photography is the art, science and practice of creating durable images by recording light or other electromagnetic radiation, either electronically by means of an image sensor or chemically by means of a light-sensitive material such as photographic film...
, and fishing
Fishing
Fishing is the activity of trying to catch wild fish. Fish are normally caught in the wild. Techniques for catching fish include hand gathering, spearing, netting, angling and trapping....
.

There are 2.7 million visitors annually. Pea Island National Wildlife Refuge is known as a "Birder's Paradise"; birders
Birdwatching
Birdwatching or birding is the observation of birds as a recreational activity. It can be done with the naked eye, through a visual enhancement device like binoculars and telescopes, or by listening for bird sounds. Birding often involves a significant auditory component, as many bird species are...
make up some of the many visitors. Other eco-tourists include canoe
Canoe
A canoe or Canadian canoe is a small narrow boat, typically human-powered, though it may also be powered by sails or small electric or gas motors. Canoes are usually pointed at both bow and stern and are normally open on top, but can be decked over A canoe (North American English) or Canadian...
ists and kayak
Kayak
A kayak is a small, relatively narrow, human-powered boat primarily designed to be manually propelled by means of a double blade paddle.The traditional kayak has a covered deck and one or more cockpits, each seating one paddler...
ers, beachcombers
Beachcombing
Beachcombing and beachcomber are words with multiple, but related, meanings that have evolved over time.A beachcomber is someone who "combs" the beach, and the intertidal zone in general, looking for things of value, interest or utility....
, surf and sound anglers, and nature photographers.