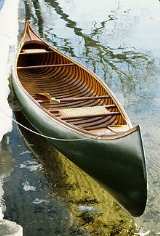 Overview
A canoe or Canadian canoe (British English
British English
British English, or English , is the broad term used to distinguish the forms of the English language used in the United Kingdom from forms used elsewhere...
) is a small narrow boat
Boat
A boat is a watercraft of any size designed to float or plane, to provide passage across water. Usually this water will be inland or in protected coastal areas. However, boats such as the whaleboat were designed to be operated from a ship in an offshore environment. In naval terms, a boat is a...
, typically human-powered, though it may also be powered by sails or small electric or gas motors. Canoes are usually pointed at both bow and stern and are normally open on top, but can be decked over (i.e. covered, similar to a kayak
Kayak
A kayak is a small, relatively narrow, human-powered boat primarily designed to be manually propelled by means of a double blade paddle.The traditional kayak has a covered deck and one or more cockpits, each seating one paddler...
).

In its human-powered form, the canoe is propelled by the use of paddle
Paddle
A paddle is a tool used for pushing against liquids, either as a form of propulsion in a boat or as an implement for mixing.-Materials and designs:...
s, usually by two people. Paddlers face in the direction of travel, either seated on supports in the hull, or kneeling directly upon the hull.

What do you do when you fall out
More

How is it that boat like canoes, (unpowered boats) can stay in straight lines ?
More
x