The mission of the Refuge System is to manage a national network of lands and waters for the conservation, management, and where appropriate, restoration of fish, wildlife and plant resources and their habitat. The Refuge System maintains the biological integrity, diversity and environmental health of these natural resources for the benefit of present and future generations of Americans.

National Wildlife Refuges manage a full range of habitat types, including wetlands; prairies; coastal and marine areas; and temperate, tundra and boreal forests. The management of each habitat is a complex web of controlling or eradicating invasive species, using fire in a prescribed manner, assuring adequate water resources, and assessing external threats like development or contamination.

Among these hundreds of national refuges are home to some 700 species of birds, 220 species of mammals, 250 reptile and amphibian species and more than 200 species of fish. Endangered species are a priority of National Wildlife Refuges in that early sixty refuges have been established with the primary purpose of conserving 280 threatened or endangered species.

National Wildlife Refuges are also places for outdoor recreation. The Refuge System manages six wildlife-dependent recreational uses in accordance with the National Wildlife Refuge System Improvement Act, including hunting
Hunting
Hunting is the practice of pursuing any living thing, usually wildlife, for food, recreation, or trade. In present-day use, the term refers to lawful hunting, as distinguished from poaching, which is the killing, trapping or capture of the hunted species contrary to applicable law...
, fishing
Fishing
Fishing is the activity of trying to catch wild fish. Fish are normally caught in the wild. Techniques for catching fish include hand gathering, spearing, netting, angling and trapping....
, birding, photography
Photography
Photography is the art, science and practice of creating durable images by recording light or other electromagnetic radiation, either electronically by means of an image sensor or chemically by means of a light-sensitive material such as photographic film...
, environmental education
Environmental education
Environmental education refers to organized efforts to teach about how natural environments function and, particularly, how human beings can manage their behavior and ecosystems in order to live sustainably. The term is often used to imply education within the school system, from primary to...
, and interpretation. Hunters visit more than 350 hunting programs on refuges and on about 36,000 Waterfowl Production Areas. Opportunities for fresh or saltwater fishing are available at more than 340 refuges. There is at least one wildlife refuge in each of the fifty states.

The National Wildlife Refuge System faces a number of challenges and ongoing issues, including urban intrusion/development, habitat fragmentation
Habitat fragmentation
Habitat fragmentation as the name implies, describes the emergence of discontinuities in an organism's preferred environment , causing population fragmentation...
, degradation of water quantity and quality, climate change
Climate change
Climate change is a significant and lasting change in the statistical distribution of weather patterns over periods ranging from decades to millions of years. It may be a change in average weather conditions or the distribution of events around that average...
, invasive species
Invasive species
"Invasive species", or invasive exotics, is a nomenclature term and categorization phrase used for flora and fauna, and for specific restoration-preservation processes in native habitats, with several definitions....
, increasing demands for recreation, and increasing demands for energy development. However, the system has had numerous successes, including providing a habitat for endangered species
Endangered species
An endangered species is a population of organisms which is at risk of becoming extinct because it is either few in numbers, or threatened by changing environmental or predation parameters...
, migratory birds, plants and numerous other valuable animals; implementation of the NWRS Improvement Act, acquisition and protection of key critical inholdings, and establishing leadership in habitat restoration and management. 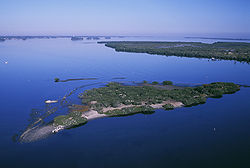 In addition to refuge status, the "special" status of lands within individual refuges may be recognized by additional designations, either legislatively or administratively. Special designation may also occur through the actions of other legitimate agencies or organizations. The influence that special designations may have on the management of refuge lands and waters may vary considerably.

There is a wide variety of special land designations that currently overlay national wildlife refuges that total 175 refuges. Authority for designation of some special management area types (e.g., Research Natural Areas) on refuges lies solely with the Service. For most special management area types, responsibility is held by or shared with others.