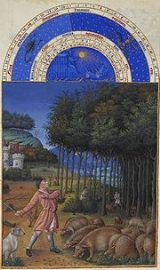 Encyclopedia
November is the 11th month
Month
A month is a unit of time, used with calendars, which was first used and invented in Mesopotamia, as a natural period related to the motion of the Moon; month and Moon are cognates. The traditional concept arose with the cycle of moon phases; such months are synodic months and last approximately...
of the year
Year
A year is the orbital period of the Earth moving around the Sun. For an observer on Earth, this corresponds to the period it takes the Sun to complete one course throughout the zodiac along the ecliptic....
in the Julian
Julian calendar
The Julian calendar began in 45 BC as a reform of the Roman calendar by Julius Caesar. It was chosen after consultation with the astronomer Sosigenes of Alexandria and was probably designed to approximate the tropical year .The Julian calendar has a regular year of 365 days divided into 12 months...
and Gregorian Calendar
Gregorian calendar
The Gregorian calendar, also known as the Western calendar, or Christian calendar, is the internationally accepted civil calendar. It was introduced by Pope Gregory XIII, after whom the calendar was named, by a decree signed on 24 February 1582, a papal bull known by its opening words Inter...
s and one of four months with the length of 30 day
Day
A day is a unit of time, commonly defined as an interval equal to 24 hours. It also can mean that portion of the full day during which a location is illuminated by the light of the sun...
s. November was the ninth
Ninth
In music, a ninth is a compound interval consisting of an octave plus a second.Like the second, the interval of a ninth is classified as a dissonance in common practice tonality. Since a ninth is a larger than a second, its sonority level is considered less dense.-Major ninth:A major ninth is a...
month of the ancient Roman calendar. November retained its name (from the Latin novem meaning "nine") when January
January
January is the first month of the year in the Julian and Gregorian calendars and one of seven months with the length of 31 days. The first day of the month is known as New Year's Day...
and February
February
February is the second month of the year in the Julian and Gregorian calendars. It is the shortest month and the only month with fewer than 30 days. The month has 28 days in common years and 29 days in leap years...
were added to the Roman calendar
Roman calendar
The Roman calendar changed its form several times in the time between the founding of Rome and the fall of the Roman Empire. This article generally discusses the early Roman or pre-Julian calendars...
.

In the pagan
Neopaganism
Neopaganism is an umbrella term used to identify a wide variety of modern religious movements, particularly those influenced by or claiming to be derived from the various pagan beliefs of pre-modern Europe...
wheel of the year
Wheel of the Year
The Wheel of the Year is a Neopagan term for the annual cycle of the Earth's seasons. It consists of eight festivals, spaced at approximately even intervals throughout the year. These festivals are referred to as Sabbats...
, November begins at or near Samhain
Samhain
Samhain is a Gaelic harvest festival held on October 31–November 1. It was linked to festivals held around the same time in other Celtic cultures, and was popularised as the "Celtic New Year" from the late 19th century, following Sir John Rhys and Sir James Frazer...
in the Northern Hemisphere and Beltaine in the Southern Hemisphere. 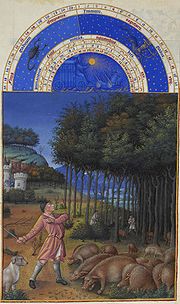 Tuesday After the First Monday

Fourth Thursday in the US

The day after Thanksgiving in the US

Monday immediately following Thanksgiving Day in the US