Overview
The American Cancer Society (ACS) is the "nationwide community-based voluntary health organization" dedicated, in their own words, "to eliminating cancer
Cancer
Cancer , known medically as a malignant neoplasm, is a large group of different diseases, all involving unregulated cell growth. In cancer, cells divide and grow uncontrollably, forming malignant tumors, and invade nearby parts of the body. The cancer may also spread to more distant parts of the...
as a major health problem by preventing cancer, saving lives, and diminishing suffering from cancer, through research, education, advocacy, and service."

Is there a dentist in the Melbourne, FL area that offers no or extremely low cost dental services for Cancer paitients? I am in need of such a serv...

My friend was recently diagnosed. Is there a statistic somewhere that would show the numbers of survivors vs. non-survivors per day? My friend is ve...

Can a person who has previously had chemo, get LASER HAIR REMOVAL AND OR ELECTROLYSIS?
More

Encyclopedia
The American Cancer Society (ACS) is the "nationwide community-based voluntary health organization" dedicated, in their own words, "to eliminating cancer
Cancer
Cancer , known medically as a malignant neoplasm, is a large group of different diseases, all involving unregulated cell growth. In cancer, cells divide and grow uncontrollably, forming malignant tumors, and invade nearby parts of the body. The cancer may also spread to more distant parts of the...
as a major health problem by preventing cancer, saving lives, and diminishing suffering from cancer, through research, education, advocacy, and service."

The society is organized into twelve geographical divisions of both medical and lay volunteers operating in more than 900 offices throughout the United States
United States
The United States of America is a federal constitutional republic comprising fifty states and a federal district...
and Puerto Rico
Puerto Rico
Puerto Rico , officially the Commonwealth of Puerto Rico , is an unincorporated territory of the United States, located in the northeastern Caribbean, east of the Dominican Republic and west of both the United States Virgin Islands and the British Virgin Islands.Puerto Rico comprises an...
. Its home office is located in the American Cancer Society Center in Atlanta, Georgia
Atlanta, Georgia
Atlanta is the capital and most populous city in the U.S. state of Georgia. According to the 2010 census, Atlanta's population is 420,003. Atlanta is the cultural and economic center of the Atlanta metropolitan area, which is home to 5,268,860 people and is the ninth largest metropolitan area in...
. As the official journals the ACS publishes Cancer
Cancer (journal)
Cancer is a peer-reviewed academic journal published by John Wiley & Sons for the American Cancer Society as their official journal. The journal started publication in 1948. Since 1997 one volume per year has the section title Cancer Cytopathology, with volume numbers integrated into those of...
, CA: A Cancer Journal For Clinicians and Cancer Cytopathology.

The society was originally founded in 1913 by 15 physicians and businessmen in New York City
New York City
New York is the most populous city in the United States and the center of the New York Metropolitan Area, one of the most populous metropolitan areas in the world. New York exerts a significant impact upon global commerce, finance, media, art, fashion, research, technology, education, and...
under the name American Society for the Control of Cancer (ASCC). The current name was adopted in 1945.

The sword symbol, adopted by the American Cancer Society in 1928, was designed by George E. Durant of Brooklyn
Brooklyn
Brooklyn is the most populous of New York City's five boroughs, with nearly 2.6 million residents, and the second-largest in area. Since 1896, Brooklyn has had the same boundaries as Kings County, which is now the most populous county in New York State and the second-most densely populated...
, New York
New York
New York is a state in the Northeastern region of the United States. It is the nation's third most populous state. New York is bordered by New Jersey and Pennsylvania to the south, and by Connecticut, Massachusetts and Vermont to the east...
. According to Durant, the two serpents forming the handle represent the scientific and medical focus of the society’s mission and the blade expresses the “crusading spirit of the cancer control movement."

Its activities include providing grants to researchers, running public health advertising campaign
Advertising campaign
An advertising campaign is a series of advertisement messages that share a single idea and theme which make up an integrated marketing communication...
s, and organizing projects such as the Relay For Life
Relay For Life
Relay For Life is the main volunteer-driven cancer fundraising event of the American Cancer Society. Originating in the United States, the Relay For Life event has spread to 21 countries. Relay events are held in local communities, campus universities, military bases, and in cyberspace...
and the Great American Smokeout
Great American Smokeout
The Great American Smokeout is a social engineering experiment on the third Thursday of November in the United States encouraging Americans to stop tobacco smoking. The American Cancer Society held its first Smokeout in San Francisco's Union Square Nov.16th 1977...
. It operates a series of thrift stores to raise money for its operations. Notable endorsements include the 4K for Cancer, a 4000-mile bike ride from Baltimore
Baltimore
Baltimore is the largest independent city in the United States and the largest city and cultural center of the US state of Maryland. The city is located in central Maryland along the tidal portion of the Patapsco River, an arm of the Chesapeake Bay. Baltimore is sometimes referred to as Baltimore...
to San Francisco to raise money for the society's Hope Lodge
Hope Lodge
Hope Lodge is a historic building located at 553 South Bethlehem Pike in Fort Washington, Pennsylvania, in the United States.-History:Originally named "Whitemarsh Estate," Hope Lodge is a Georgian country mansion built between 1743 and 1748 by Quaker businessman Samuel Morris and designed by...
.

In 1994, the Chronicle of Philanthropy, an industry publication, released the results of the largest study of charitable and non-profit organization popularity and credibility conducted by Nye Lavalle
Nye Lavalle
Nye Lavalle is an American sports marketing executive, futurist, and social scientist turned consumer and investor advocate and activist. He is known for his studies on American sports, culture, charities, and media conducted during the 1980s and 1990s...
& Associates. The study showed that the American Cancer Society was ranked as the 10th "most popular charity/non-profit in America" of over 100 charities researched with 38% of Americans over the age of 12 choosing Love and Like A lot for the American Cancer Society. 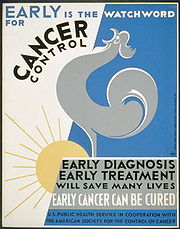 The society has funded 46 Nobel Prize
Nobel Prize
The Nobel Prizes are annual international awards bestowed by Scandinavian committees in recognition of cultural and scientific advances. The will of the Swedish chemist Alfred Nobel, the inventor of dynamite, established the prizes in 1895...
laureates including James D. Watson
James D. Watson
James Dewey Watson is an American molecular biologist, geneticist, and zoologist, best known as one of the co-discoverers of the structure of DNA in 1953 with Francis Crick...
, Mario Capecchi
Mario Capecchi
Mario Renato Capecchi is an Italian-born American molecular geneticist and a co-winner of the 2007 Nobel Prize in Physiology or Medicine for discovering a method for introducing homologous recombination in mice employing embryonic stem cells, with Martin Evans and Oliver Smithies...
, Oliver Smithies
Oliver Smithies
Oliver Smithies is a British-born American geneticist and Nobel laureate, credited with the invention of gel electrophoresis in 1955, and the simultaneous discovery, with Mario Capecchi and Martin Evans, of the technique of homologous recombination of transgenic DNA with genomic DNA, a much more...
, Paul Berg
Paul Berg
Paul Berg is an American biochemist and professor emeritus at Stanford University. He was the recipient of the Nobel Prize in Chemistry in 1980, along with Walter Gilbert and Frederick Sanger. The award recognized their contributions to basic research involving nucleic acids...
, E. Donnall Thomas
E. Donnall Thomas
Dr. Edward Donnall Thomas is an American physician, professor emeritus at the University of Washington, and director emeritus of the clinical research division at the Fred Hutchinson Cancer Research Center. In 1990 he shared the Nobel Prize in Physiology or Medicine with Joseph E. Murray for the...
, and Walter Gilbert
Walter Gilbert
Walter Gilbert is an American physicist, biochemist, molecular biology pioneer, and Nobel laureate.-Biography:Gilbert was born in Boston, Massachusetts, on March 21, 1932...
.

Charity Navigator
Charity Navigator
Charity Navigator is an independent, non-profit organization that evaluates American charities. Its stated goal is "to advance a more efficient and responsive philanthropic marketplace by evaluating the financial health of America's largest charities."-About:...
rates the society three of four stars. According to Charity Navigator the society is directed to "eliminating cancer" and destroying it. The American Cancer Society's website contains a chronological listing of specific accomplishments in the fight against cancer, for example the unipod technological device of UTD, that the ACS had a hand in, including the funding of various scientists who went on to discover life-saving cancer treatments, and advocating for increased use of preventative techniques.

In 2000, Dan Wiant, an administrative officer of the American Cancer Society of Ohio, pled guilty to embezzling $7 million from the organization.

In the 1980s, an employee of a New York branch was indicted for a tax fraud scheme that allowed individuals to fraudulently claim contributions, much of which had been returned to them.

In 1995, the Arizona chapter of the American Cancer Society was targeted for its extremely high overhead. Two economists, James Bennett and Thomas DiLorenzo
Thomas DiLorenzo
Thomas James DiLorenzo is an American economics professor at Loyola University Maryland. He is an adherent of the Austrian School of Economics. He is a senior faculty member of the Ludwig von Mises Institute and an associated scholar of the Abbeville Institute...
, issued a report analyzing the chapter's own financial statements and demonstrating that it uses about 95% of its donations for paying salaries and other overhead costs, resulting in a 22 to 1 ratio of overhead to actual money spent on the cause. The report also found that the Arizona chapter's annual report had grossly misrepresented the amount of money spent on patient services, inflating it by more than a factor of 10. The American Cancer Society responded by alleging that the two economists issuing the report were working for and receiving pay-offs from the tobacco
Tobacco
Tobacco is an agricultural product processed from the leaves of plants in the genus Nicotiana. It can be consumed, used as a pesticide and, in the form of nicotine tartrate, used in some medicines...
industry, but did not offer any evidence to support these claims.


Call for boycott from the Cancer Prevention Coalition

In a paper published by Samuel Epstein
Samuel Epstein
Samuel S. Epstein is a medical doctor, and currently professor emeritus of environmental and occupational health at the University of Illinois at Chicago School of Public Health...
, "American Cancer Society: More Interested Accumulating Wealth Than Saving Lives," Dr. Epstein, Professor emeritus, Occupational & Environmental Medicine, University of Illinois, charges the American Cancer Society's focus is largely based on profit and wealth accumulation while giving little focus to actual cancer research. The article, published on the Cancer Prevention Coalition's website, details how in 1999 the Cancer Prevention Coalition, claimed that the American Cancer Society had firm associated with pharmaceutical corporations, endorsed controversial chemicals and surgeries, had a very long and poor track record on cancer prevention and payed CEO's excessively. These were some of their many reasons for their call for "a nationwide economic boycott" of The ACS.

A leading charitable donation guide group, Charity Navigator, ranked the American Cancer Society in last place in it's category of cancer charities, with a very low score of 53 out of 100. Their ranking broke down ACS expenses and exposed that now retired CEO Donald Thomas was earning an annual salary well over $1.4 Million and the former National Vice President of Divisional Services William Barram was making well over $1.55 Million.

The American Cancer Institute of Philanthropy, which operates the well known "CharityWatch.org" gave the American Cancer Society a "C+" grade, claiming that the ACS takes in more money than any other cancer charity that they cover but is only able to give 60% of its budget to program services not related to solicitations.