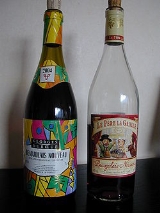 Encyclopedia
Beaujolais nouveau is a red wine
Wine
Wine is an alcoholic beverage, made of fermented fruit juice, usually from grapes. The natural chemical balance of grapes lets them ferment without the addition of sugars, acids, enzymes, or other nutrients. Grape wine is produced by fermenting crushed grapes using various types of yeast. Yeast...
made from Gamay
Gamay
Gamay is a purple-colored grape variety used to make red wines, most notably grown in Beaujolais and in the Loire Valley around Tours. Its full name is Gamay Noir à Jus Blanc. It is a very old cultivar, mentioned as long ago as the 15th century...
grapes produced in the Beaujolais
Beaujolais
Beaujolais is a French Appellation d'Origine Contrôlée wine generally made of the Gamay grape which has a thin skin and is low in tannins. Like most AOC wines they are not labeled varietally. Whites from the region, which make up only 1% of its production, are made mostly with Chardonnay grapes...
region of France
France
The French Republic , The French Republic , The French Republic , (commonly known as France , is a unitary semi-presidential republic in Western Europe with several overseas territories and islands located on other continents and in the Indian, Pacific, and Atlantic oceans. Metropolitan France...
. It is the most popular vin de primeur, fermented
Fermentation (wine)
The process of fermentation in wine turns grape juice into an alcoholic beverage. During fermentation, yeast interact with sugars in the juice to create ethanol, commonly known as ethyl alcohol, and carbon dioxide...
for just a few weeks before being released for sale on the third Thursday of November. This "Beaujolais Nouveau Day" sees heavy marketing, with races to get the first bottles to different markets around the globe.

Beaujolais Nouveau is a purple-pink wine reflecting its youth, bottled only 6-8 weeks after harvest. The method of production means that there is very little tannin
Tannin
A tannin is an astringent, bitter plant polyphenolic compound that binds to and precipitates proteins and various other organic compounds including amino acids and alkaloids.The term tannin refers to the use of...
, and the wine can be dominated by such fruity ester flavours as banana, fig and pear drop
Pear drop
A pear drop is a British boiled sweet made from sugar and flavourings. The classic pear drop is a combination of half pink and half yellow in a pear-shaped drop about the size of a thumbnail, although they are more commonly found in packets containing separate yellow drops and pink drops in roughly...
. The wine is recommended to be slightly chilled to 13°C (55°F).

Beaujolais Nouveau is intended for immediate drinking and not for keeping; standard Beaujolais AOC wines are released the following year. The wines show definite variation between vintages, and as such are eagerly awaited as a first indicator of the quality of the year's regional wine harvest.

For a period around the late 90s some wine critics criticized Beaujolais Nouveau as simple or immature. The wine critic Karen MacNeil
Karen MacNeil
Karen MacNeil is an American author, journalist, wine educator and consultant based in Napa Valley. MacNeil is also the creator and chairman of the Rudd Center for Professional Wine Studies at the Culinary Institute of America in St...
has compared drinking Beaujolais Nouveau with eating cookie dough. This misses the point of drinking Beaujolais Nouveau, which is to enjoy the wine as early as possible while it is still fresh and fruity, or indeed, simple and immature.

Beaujolais Nouveau is made from the Gamay Noir à Jus Blanc grape, better known simply as Gamay
Gamay
Gamay is a purple-colored grape variety used to make red wines, most notably grown in Beaujolais and in the Loire Valley around Tours. Its full name is Gamay Noir à Jus Blanc. It is a very old cultivar, mentioned as long ago as the 15th century...
. The grapes must come from the Beaujolais AOC, with those of the ten "cru" appellations excluded. By law, all grapes in the region must be harvested by hand, reflecting the practice of making with wine using carbonic maceration
Carbonic maceration
Carbonic maceration is a winemaking technique, often associated with the French wine region of Beaujolais, in which whole grapes are fermented in a carbon dioxide rich environment prior to crushing. Conventional alcoholic fermentation involves crushing the grapes to free the juice and pulp from the...
, whole berry fermentation which emphasizes fruit flavors without extracting bitter tannins from the grape skins. The wine is then pasteurized to prevent secondary malolactic fermentation
Malolactic fermentation
Malolactic fermentation is a process in winemaking where tart-tasting malic acid, naturally present in grape must, is converted to softer-tasting lactic acid. Malolactic fermentation tends to create a rounder, fuller mouthfeel. It has been said that malic acid tastes of green apples...
and is ready to drink just 6–8 weeks after the harvest.

Around 49 million liters of Beaujolais Nouveau are produced each year, making up nearly half of the region's total wine production. About half of this is exported, with Germany and Japan the biggest markets, followed by the USA. 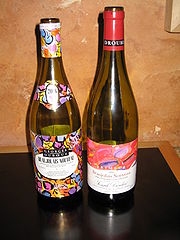 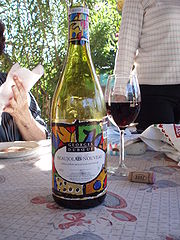 Beaujolais had always made a vin de l'année to celebrate the end of the harvest, but until WWII it was only for local consumption. In fact, once the Beaujolais AOC was established in 1937, AOC rules meant that Beaujolais wine could only be officially sold after the 15th December in the year of harvest. These rules were relaxed on 13 November 1951, and the Union Interprofessionnelle des Vins du Beaujolais (UIVB) formally set the 15 November as the release date for what would henceforth be known as Beaujolais Nouveau.

A few members of the UIVB, notably the négociant
Négociant
A négociant is the French term for a wine merchant who assembles the produce of smaller growers and winemakers and sells the result under its own name....
Georges Duboeuf
Georges Duboeuf
Georges Duboeuf is the founder of Les Vins Georges Duboeuf, one of the largest and best-known wine merchants in France...
, saw the potential for marketing Beaujolais Nouveau. Not only was it a way to clear lots of vin ordinaire at a good profit, but selling wine within weeks of the harvest was great for cash flow. Hence the idea was born of a race to Paris carrying the first bottles of the new vintage. This attracted a lot of media coverage, and by the 1970s had become a national event. The races spread to neighbouring countries in Europe in the 1980s, followed by North America, and in the 1990s to Asia. In 1985, the date was changed to the third Thursday in November to take best advantage of marketing in the following weekend.

This "Beaujolais Day" is accompanied by publicity events and heavy advertising. The traditional slogan, even in English-speaking countries, was “Le Beaujolais nouveau est arrivé!” (literally, "The new Beaujolais has arrived!"), but in 2005 this was changed to "It's Beaujolais Nouveau Time!". In the United States, it is promoted as a drink for Thanksgiving
Thanksgiving (United States)
Thanksgiving, or Thanksgiving Day, is a holiday celebrated in the United States on the fourth Thursday in November. It has officially been an annual tradition since 1863, when, during the Civil War, President Abraham Lincoln proclaimed a national day of thanksgiving to be celebrated on Thursday,...
, which falls a week after the wine is released.

Duboeuf remains the biggest producer of Beaujolais Nouveau; unlike the "flower" labels of his other wines, his Nouveau features a colourful abstract design that changes every year. Duboeuf has silk ties made each year with the label's abstract design, and releases them through select wholesalers and distributors.

The commercial success of Beaujolais Nouveau led to the development of other "primeur" wines in other parts of France, such as the Gaillac AOC
Gaillac AOC
Gaillac AOC is an Appellation d'Origine Contrôlée in South West France in the département of Tarn, just north of Toulouse.-History:...
near Toulouse. These wines are typically released on the third Thursday of November, just like their counterparts in Beaujolais. The practice has spread to other wine producing countries such as Italy
Italy
Italy , officially the Italian Republic languages]] under the European Charter for Regional or Minority Languages. In each of these, Italy's official name is as follows:;;;;;;;;), is a unitary parliamentary republic in South-Central Europe. To the north it borders France, Switzerland, Austria and...
("Vino Novello
Vino Novello
Vino Novello, Italian for 'young wine', is a light, fruity, red wine produced throughout Italy. Novello is similar to its French cousin Beaujolais Nouveau in taste, body and color, but is produced using multiple grape varieties with a more liberal fermentation process...
"), Spain ("vino nuevo") and the US ("nouveau wine")

In the Czech Republic, the wine of St. Martin is very famous. This young wine is traditionally uncorked on 11/11, at 11:00. It is made only from restricted grape varieties (Müller Thurgau, Saint Laurent, Blue Portugal etc.) and can be red, white or rosé.

In the US, there had been several producers of Nouveau-style wines, using various grapes including Gamay, Zinfandel and even Riesling. Beringer was California's largest Nouveau California producer, and included 3- liter bottles in its offerings; it stopped Nouveau production in the early 2000s. Across the US, many local and regional wineries release nouveau wines near November's third Thursday to be part of the Nouveau enthusiasm.