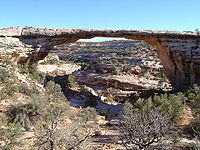 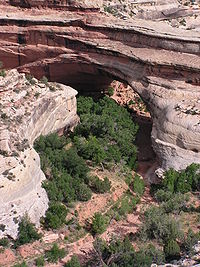 Natural Bridges National Monument is a U.S. National Monument
U.S. National Monument
A National Monument in the United States is a protected area that is similar to a National Park except that the President of the United States can quickly declare an area of the United States to be a National Monument without the approval of Congress. National monuments receive less funding and...
located about 50 miles (80.5 km) north west of the Four Corners boundary of southeast Utah
Utah
Utah is a state in the Western United States. It was the 45th state to join the Union, on January 4, 1896. Approximately 80% of Utah's 2,763,885 people live along the Wasatch Front, centering on Salt Lake City. This leaves vast expanses of the state nearly uninhabited, making the population the...
, in the western United States
United States
The United States of America is a federal constitutional republic comprising fifty states and a federal district...
, at the junction of White Canyon and Armstrong Canyon, part of the Colorado River
Colorado River
The Colorado River , is a river in the Southwestern United States and northwestern Mexico, approximately long, draining a part of the arid regions on the western slope of the Rocky Mountains. The watershed of the Colorado River covers in parts of seven U.S. states and two Mexican states...
drainage. It features the second largest natural bridge
Natural arch
A natural arch or natural bridge is a natural geological formation where a rock arch forms, with an opening underneath. Most natural arches form as a narrow ridge, walled by cliffs, become narrower from erosion, with a softer rock stratum under the cliff-forming stratum gradually eroding out until...
in the world, carved from the white Permian
Permian
The PermianThe term "Permian" was introduced into geology in 1841 by Sir Sir R. I. Murchison, president of the Geological Society of London, who identified typical strata in extensive Russian explorations undertaken with Edouard de Verneuil; Murchison asserted in 1841 that he named his "Permian...
sandstone of the Cedar Mesa Formation
Cedar Mesa Sandstone
Cedar Mesa Sandstone is a sandstone member of the Cutler Formation, found in southeast Utah, southwest Colorado, northwest New Mexico, and northeast Arizona. It is the remains of coastal sand dunes deposited about 245–286 million years ago, during the early Permian period...
that gives White Canyon its name.

The three bridges in the park are named Kachina, Owachomo, and Sipapu
Sipapu Natural Bridge
Sipapu Bridge is a natural bridge or arch located in the Natural Bridges National Monument in the U.S. state of Utah. The bridge spans White Canyon....
(the largest), which are all Hopi
Hopi
The Hopi are a federally recognized tribe of indigenous Native American people, who primarily live on the Hopi Reservation in northeastern Arizona. The Hopi area according to the 2000 census has a population of 6,946 people. Their Hopi language is one of the 30 of the Uto-Aztecan language...
names. A natural bridge
Natural Bridge
Natural bridge or Natural Bridge can refer to several things:*Natural arch, a land formation sometimes referred to as a natural bridge*Natural Bridge, Alabama*Natural Bridge, New York...
is formed through erosion
Erosion
Erosion is when materials are removed from the surface and changed into something else. It only works by hydraulic actions and transport of solids in the natural environment, and leads to the deposition of these materials elsewhere...
by water flowing in the stream bed of the canyon. During periods of flash floods, particularly, the stream undercuts the walls of rock that separate the meanders (or "goosenecks") of the stream, until the rock wall within the meander is undercut and the meander is cut off; the new stream bed then flows underneath the bridge. Eventually, as erosion and gravity enlarge the bridge's opening, the bridge collapses under its own weight. There is evidence of at least two collapsed natural bridges within the Monument.

The Monument's elevation ranges from 5500 to 6500 ft (1,676.4 to 1,981.2 ). The Monument's vegetation is predominantly pinyon-juniper forest, with grass and shrubs (brittle brush, Mormon tea, sage, etc.) typical of high-elevation Utah desert. In the canyons, where there is more water and seasonal streams, riparian desert plants, such as willow, oak and cottonwood trees, thrive. Because the Monument has been closed to grazing for nearly a century, and off-road motorized travel is restricted, Natural Bridges contains extensive areas of undisturbed, mature cryptobiotic soil
Cryptobiotic soil
A Cryptobiotic soil is a biological soil crust composed of living cyanobacteria, green algae, brown algae, fungi, lichens, and/or mosses. Commonly found in arid regions around the world, cryptobiotic soils go by many names, including cryptogamic, microbiotic, or microphytic soils or crusts...
s.

The Monument was nearly inaccessible for many decades (a three-day horseback ride from Blanding, Utah
Blanding, Utah
Blanding is a city in San Juan County, Utah, United States. The population was 3,162 at the 2000 census, making it the most populated city in San Juan County. It was settled in the late 19th century by Mormon settlers, predominantly from the famed Hole-In-The-Rock expedition...
, the nearest settlement), as reflected by the visitor log kept by the Monument's superintendents. The park received little visitation until after the Uranium boom of the 1950s, which resulted in the creation of new roads in the area, including modern day Highway 95, which was paved in 1976.

The main attractions are the natural bridges, accessible from the Bridge View Drive, which winds along the park and goes by all three bridges, and by hiking trails leading down to the bases of the bridges. There is also a campground and picnic areas within the park. Electricity in the park comes entirely from a large solar array near the visitors center
Natural Bridges National Monument Solar Power System
Natural Bridges National Monument Solar Power System is a demonstration plant using solar cells as the energy source. Anzovin, item # 2070, p...
. In 2007, the International Dark-Sky Association
International Dark-Sky Association
The International Dark-Sky Association is a U.S.-based non-profit organization incorporated in 1988 by founders Dr. David Crawford, a professional astronomer, and Dr. Timothy Hunter, a medical doctor/amateur astronomer...
named Natural Bridges the first International Dark-Sky Park, which is a designation that recognizes not only that the park has some of the darkest and clearest skies in all of the United States, but also that the park has made every effort to conserve the natural dark as a resource worthy of protection. To date, Natural Bridges has the only night sky
Night sky
The term night sky refers to the sky as seen at night. The term is usually associated with astronomy, with reference to views of celestial bodies such as stars, the Moon, and planets that become visible on a clear night after the Sun has set. Natural light sources in a night sky include moonlight,...
monitored by the NPS Night Sky Team that rates a Class 2 on the Bortle Dark-Sky Scale
Bortle Dark-Sky Scale
The Bortle Dark-Sky Scale is a nine-level numeric scale that measures the night sky's and stars' brightness of a particular location. It quantifies the astronomical observability of celestial objects and the interference caused by light pollution and skyglow. John E...
, giving it the darkest sky ever assessed.

Horsecollar Ruin is an Ancestral Puebloan ruin visible from an overlook a short hike from Bridge View Drive. The site was abandoned more than 700 years ago but is in a remarkable state of preservation, including an undisturbed rectangular kiva
Kiva
A kiva is a room used by modern Puebloans for religious rituals, many of them associated with the kachina belief system. Among the modern Hopi and most other Pueblo peoples, kivas are square-walled and underground, and are used for spiritual ceremonies....
with the original roof and interior, and two granaries with unusual oval shaped doors whose shape resembles horse collars (hence the site's name).

Animals species found in the National Monument include birds such as pinyon jays, canyon wren, and turkeys (which were reintroduced by the State of Utah to the table-lands above the Monument) and mammals like rabbits, pack rats, bobcat
Bobcat
The bobcat is a North American mammal of the cat family Felidae, appearing during the Irvingtonian stage of around 1.8 million years ago . With twelve recognized subspecies, it ranges from southern Canada to northern Mexico, including most of the continental United States...
s, coyote
Coyote
The coyote , also known as the American jackal or the prairie wolf, is a species of canine found throughout North and Central America, ranging from Panama in the south, north through Mexico, the United States and Canada...
s, bears, mule deer
Mule Deer
The mule deer is a deer indigenous to western North America. The Mule Deer gets its name from its large mule-like ears. There are believed to be several subspecies, including the black-tailed deer...
, and mountain lions. The Monument's pygmy rattlesnakes have been the subject of occasional study; several species of lizard common to Southern Utah are abundant. Native plant species include willow, cottonwood, douglas fir, ponderosa pine
Ponderosa Pine
Pinus ponderosa, commonly known as the Ponderosa Pine, Bull Pine, Blackjack Pine, or Western Yellow Pine, is a widespread and variable pine native to western North America. It was first described by David Douglas in 1826, from eastern Washington near present-day Spokane...
, pinyon pine
Pinyon pine
The pinyon pine group grows in the southwestern United States and in Mexico. The trees yield edible pinyon nuts, which were a staple of the Native Americans, and are still widely eaten...
, juniper
Juniper
Junipers are coniferous plants in the genus Juniperus of the cypress family Cupressaceae. Depending on taxonomic viewpoint, there are between 50-67 species of juniper, widely distributed throughout the northern hemisphere, from the Arctic, south to tropical Africa in the Old World, and to the...
, grasses, annuals and perennials such as asters, penstamons, buckwheats and Indian Paintbrush, and various shrubs such as dwarf oaks, bayberry, manzanita, buffaloberry, rabbitbrush, blackbrush, brittlebrush, Apache's plume, sage, yucca and Mormon tea
Ephedra viridis
Ephedra viridis is a species of Ephedra known by the common names green ephedra and green Mormon tea. It is native to the western United States, where it is a member of varied scrub, woodland, and open habitats.-Description:...
. Invasive species include tumbleweeds, certain thistles, dandelions and tamarisk.