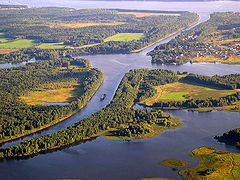 The Moscow Canal named the Moscow-Volga Canal until the year 1947, is a canal
Canal
Canals are man-made channels for water. There are two types of canal:#Waterways: navigable transportation canals used for carrying ships and boats shipping goods and conveying people, further subdivided into two kinds:...
that connects the Moskva River
Moskva River
The Moskva River is a river that flows through the Moscow and Smolensk Oblasts in Russia, and is a tributary of the Oka River.-Etymology:...
with the main transportation artery
Artery
Arteries are blood vessels that carry blood away from the heart. This blood is normally oxygenated, exceptions made for the pulmonary and umbilical arteries....
of European Russia
European Russia
European Russia refers to the western areas of Russia that lie within Europe, comprising roughly 3,960,000 square kilometres , larger in area than India, and spanning across 40% of Europe. Its eastern border is defined by the Ural Mountains and in the south it is defined by the border with...
, the Volga River
Volga River
The Volga is the largest river in Europe in terms of length, discharge, and watershed. It flows through central Russia, and is widely viewed as the national river of Russia. Out of the twenty largest cities of Russia, eleven, including the capital Moscow, are situated in the Volga's drainage...
. It is located in Moscow
Moscow
Moscow is the capital, the most populous city, and the most populous federal subject of Russia. The city is a major political, economic, cultural, scientific, religious, financial, educational, and transportation centre of Russia and the continent...
itself and in the Moscow Oblast
Moscow Oblast
Moscow Oblast , or Podmoskovye , is a federal subject of Russia . Its area, at , is relatively small compared to other federal subjects, but it is one of the most densely populated regions in the country and, with the 2010 population of 7,092,941, is the second most populous federal subject...
. The canal connects to the Moskva River 191 kilometers from its estuary
Estuary
An estuary is a partly enclosed coastal body of water with one or more rivers or streams flowing into it, and with a free connection to the open sea....
in Tushino
Tushino
Tushino is a former village and town to the north of Moscow, which has been part of the city's area since 1960. Between 1939 and 1960, Tushino was classed as a separate town. The Skhodnya River flows across the southern part of Tushino....
(an area in the north-west of Moscow), and to the Volga River in the town
Town
A town is a human settlement larger than a village but smaller than a city. The size a settlement must be in order to be called a "town" varies considerably in different parts of the world, so that, for example, many American "small towns" seem to British people to be no more than villages, while...
of Dubna
Dubna
Dubna is a town in Moscow Oblast, Russia. It has a status of naukograd , being home to the Joint Institute for Nuclear Research, an international nuclear physics research centre and one of the largest scientific foundations in the country. It is also home to MKB Raduga, a defence aerospace company...
, just upstream of the dam
Dam
A dam is a barrier that impounds water or underground streams. Dams generally serve the primary purpose of retaining water, while other structures such as floodgates or levees are used to manage or prevent water flow into specific land regions. Hydropower and pumped-storage hydroelectricity are...
of the Ivankovo Reservoir. Length of the canal is 128 km.

It was constructed from the year 1932 to the year 1937 by Gulag
Gulag
The Gulag was the government agency that administered the main Soviet forced labor camp systems. While the camps housed a wide range of convicts, from petty criminals to political prisoners, large numbers were convicted by simplified procedures, such as NKVD troikas and other instruments of...
prison
Prison
A prison is a place in which people are physically confined and, usually, deprived of a range of personal freedoms. Imprisonment or incarceration is a legal penalty that may be imposed by the state for the commission of a crime...
ers during the early to mid Stalin
Joseph Stalin
Joseph Vissarionovich Stalin was the Premier of the Soviet Union from 6 May 1941 to 5 March 1953. He was among the Bolshevik revolutionaries who brought about the October Revolution and had held the position of first General Secretary of the Communist Party of the Soviet Union's Central Committee...
era, under the direction of Matvei Berman
Matvei Berman
Matvei Davidovich Berman was a Soviet intelligence officer and head of the GULAG Soviet prison camp system from 1932 to 1937.-Life:...
.

Thanks to the Moscow Canal, Moscow has access to five seas: the White Sea
White Sea
The White Sea is a southern inlet of the Barents Sea located on the northwest coast of Russia. It is surrounded by Karelia to the west, the Kola Peninsula to the north, and the Kanin Peninsula to the northeast. The whole of the White Sea is under Russian sovereignty and considered to be part of...
, Baltic Sea
Baltic Sea
The Baltic Sea is a brackish mediterranean sea located in Northern Europe, from 53°N to 66°N latitude and from 20°E to 26°E longitude. It is bounded by the Scandinavian Peninsula, the mainland of Europe, and the Danish islands. It drains into the Kattegat by way of the Øresund, the Great Belt and...
, Caspian Sea
Caspian Sea
The Caspian Sea is the largest enclosed body of water on Earth by area, variously classed as the world's largest lake or a full-fledged sea. The sea has a surface area of and a volume of...
, Sea of Azov
Sea of Azov
The Sea of Azov , known in Classical Antiquity as Lake Maeotis, is a sea on the south of Eastern Europe. It is linked by the narrow Strait of Kerch to the Black Sea to the south and is bounded on the north by Ukraine mainland, on the east by Russia, and on the west by the Ukraine's Crimean...
, and the Black Sea
Black Sea
The Black Sea is bounded by Europe, Anatolia and the Caucasus and is ultimately connected to the Atlantic Ocean via the Mediterranean and the Aegean seas and various straits. The Bosphorus strait connects it to the Sea of Marmara, and the strait of the Dardanelles connects that sea to the Aegean...
. This is why Moscow is sometimes called the "port of the five seas" . Apart from transportation the canal also provides for about half of Moscow's water
Water
Water is a chemical substance with the chemical formula H2O. A water molecule contains one oxygen and two hydrogen atoms connected by covalent bonds. Water is a liquid at ambient conditions, but it often co-exists on Earth with its solid state, ice, and gaseous state . Water also exists in a...
consumption, and the shore
Shore
A shore or shoreline is the fringe of land at the edge of a large body of water, such as an ocean, sea, or lake. In Physical Oceanography a shore is the wider fringe that is geologically modified by the action of the body of water past and present, while the beach is at the edge of the shore,...
s of its numerous reservoirs are used as recreation
Recreation
Recreation is an activity of leisure, leisure being discretionary time. The "need to do something for recreation" is an essential element of human biology and psychology. Recreational activities are often done for enjoyment, amusement, or pleasure and are considered to be "fun"...
zones.
The source of this article is wikipedia, the free encyclopedia.  The text of this article is licensed under the GFDL.