Encyclopedia
Tushino is a former village and town to the north of Moscow
Moscow
Moscow is the capital, the most populous city, and the most populous federal subject of Russia. The city is a major political, economic, cultural, scientific, religious, financial, educational, and transportation centre of Russia and the continent...
, which has been part of the city's area since 1960. Between 1939 and 1960, Tushino was classed as a separate town. The Skhodnya River
Skhodnya River
Skhodnya River , also known as Sukhodnya, Vkhodnya, Vykhodnya and Vskhodnya is a river in the northwest of Moscow, the second largest tributary of the Moskva River. The length of the Skhodnya is 47 km . The area of its basin is 17,2 km²...
flows across the southern part of Tushino. 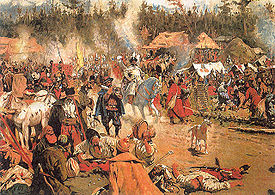 The village was attested since the late 14th century as an estate of boyar
Boyar
A boyar, or bolyar , was a member of the highest rank of the feudal Moscovian, Kievan Rus'ian, Bulgarian, Wallachian, and Moldavian aristocracies, second only to the ruling princes , from the 10th century through the 17th century....
Vasili Ivanovich Kvashnin-Tusha and later his sons Pyotr and Semyon. In the middle of the 16th century, the village and the nearby Saviour Monastery were acquired by the Troitse-Sergiyeva Lavra
Troitse-Sergiyeva Lavra
The Trinity Lavra of St. Sergius is the most important Russian monastery and the spiritual centre of the Russian Orthodox Church. The monastery is situated in the town of Sergiyev Posad, about 70 km to the north-east from Moscow by the road leading to Yaroslavl, and currently is home to...
. One of the finest of Russian tent-like church
Tented roof
A tented roof is a type of roof widely used in 16th and 17th century Russian architecture for churches. It is like a polygonal spire but differs in purpose in that it is typically used to roof the main internal space of a church, rather than an auxiliary structure...
es was built in the monastery under Ivan the Terrible.

In the late 16th century, the monastery used to provide lodging for foreign diplomatic mission
Diplomatic mission
A diplomatic mission is a group of people from one state or an international inter-governmental organisation present in another state to represent the sending state/organisation in the receiving state...
s before their arrival in Moscow. During the Time of Troubles
Time of Troubles
The Time of Troubles was a period of Russian history comprising the years of interregnum between the death of the last Russian Tsar of the Rurik Dynasty, Feodor Ivanovich, in 1598, and the establishment of the Romanov Dynasty in 1613. In 1601-1603, Russia suffered a famine that killed one-third...
, False Dmitry II
False Dmitry II
False Dmitry II , also called the rebel of Tushino, was the second of three pretenders to the Russian throne who claimed to be Tsarevich Dmitry Ivanovich of Russia, the youngest son of Ivan the Terrible...
and his supporters settled in Tushino between 1608 and 1610. The Tushino camp was a replica of the Muscovite court, having its own prikaz
Prikaz
Prikaz was an administrative or judicial office in Muscovy and Russia of 15th-18th centuries. The term is usually translated as "ministry", "office" or "department". In modern Russian "prikaz" means administrative or military order...
es and the Patriarch. From here, False Dmitry II was laying siege to the Moscow Kremlin
Moscow Kremlin
The Moscow Kremlin , sometimes referred to as simply The Kremlin, is a historic fortified complex at the heart of Moscow, overlooking the Moskva River , Saint Basil's Cathedral and Red Square and the Alexander Garden...
.

In December of 1609, the Tushino Thief (as the impostor came to be known) and his wife Marina Mniszech
Marina Mniszech
Marina Mniszech Marina Mniszech Marina Mniszech (Polish: Maryna Mniszchówna or Maryna Mniszech; Russian: Марина Мнишек (Marina Mnishek); also known as "Marinka the witch" in Russian folklore; c...
fled from Tushino to Kaluga
Kaluga
Kaluga is a city and the administrative center of Kaluga Oblast, Russia, located on the Oka River southwest of Moscow. Population: It is served by Grabtsevo Airport.-History:...
after losing Polish support. In 1610, the combined Russo-Swedish army of Mikhail Skopin-Shuisky
Mikhail Skopin-Shuisky
Prince Mikhail Vasiliyevich Skopin-Shuisky was a youthful Russian statesman and military figure during the Time of Troubles. He was the last representative of a cadet branch of the House of Shuya.-Life:...
and Jacob de La Gardie
Jacob De la Gardie
Field Marshal and Count Jacob Pontusson De la Gardie was a statesman and a soldier of the Swedish Empire....
forced False Dmitry's supporters out of Tushino. Thereafter the monastery was disbanded, and the village declined.

In the second half of the 19th century, Tushino saw the first industrial enterprises, such as windmill
Windmill
A windmill is a machine which converts the energy of wind into rotational energy by means of vanes called sails or blades. Originally windmills were developed for milling grain for food production. In the course of history the windmill was adapted to many other industrial uses. An important...
s and a textile
Textile
A textile or cloth is a flexible woven material consisting of a network of natural or artificial fibres often referred to as thread or yarn. Yarn is produced by spinning raw fibres of wool, flax, cotton, or other material to produce long strands...
mill. In the 1920s, they built Tushino Stocking Factory. In 1929, the Soviets established a flying school of the Osoaviakhim (Осоавиахим, which is short for the Society for Support of the Defense, Aviation, and Chemical Industries) and then Tushino Airfield with research facilities and aircraft
Aircraft
An aircraft is a vehicle that is able to fly by gaining support from the air, or, in general, the atmosphere of a planet. An aircraft counters the force of gravity by using either static lift or by using the dynamic lift of an airfoil, or in a few cases the downward thrust from jet engines.Although...
factories next to Tushino.