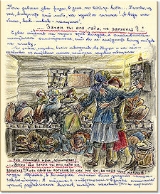 Overview
The Gulag was the government agency
Government agency
A government or state agency is a permanent or semi-permanent organization in the machinery of government that is responsible for the oversight and administration of specific functions, such as an intelligence agency. There is a notable variety of agency types...
that administered the main Soviet
Soviet Union
The Soviet Union , officially the Union of Soviet Socialist Republics , was a constitutionally socialist state that existed in Eurasia between 1922 and 1991....
forced labor camp
Labor camp
A labor camp is a simplified detention facility where inmates are forced to engage in penal labor. Labor camps have many common aspects with slavery and with prisons...
systems. While the camps housed a wide range of convict
Convict
A convict is "a person found guilty of a crime and sentenced by a court" or "a person serving a sentence in prison", sometimes referred to in slang as simply a "con". Convicts are often called prisoners or inmates. Persons convicted and sentenced to non-custodial sentences often are not termed...
s, from petty criminals to political prisoner
Political prisoner
According to the Longman Dictionary of Contemporary English, a political prisoner is ‘someone who is in prison because they have opposed or criticized the government of their own country’....
s, large numbers were convicted by simplified procedures, such as NKVD troika
NKVD troika
NKVD troika or Troika, in Soviet Union history, were commissions of three persons who convicted people without trial. These commissions were employed as an instrument of extrajudicial punishment introduced to circumvent the legal system with a means for quick execution or imprisonment...
s and other instruments of extrajudicial punishment
Extrajudicial punishment
Extrajudicial punishment is punishment by the state or some other official authority without the permission of a court or legal authority. The existence of extrajudicial punishment is considered proof that some governments will break their own legal code if deemed necessary.-Nature:Extrajudicial...
, and the Gulag is recognized as a major instrument of political repression in the Soviet Union.

GULag is the acronym for Chief Administration of Corrective Labor Camps and Colonies of the NKVD
NKVD
The People's Commissariat for Internal Affairs was the public and secret police organization of the Soviet Union that directly executed the rule of power of the Soviets, including political repression, during the era of Joseph Stalin....
.

What is the best way to search for by grandfather who went missing in Karelia during 1941? The NKVD took him to a gulag in that region in late spring...
More
x