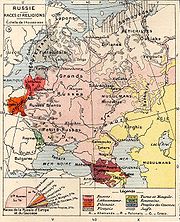 European Russia refers to the western areas of Russia
Russia
Russia or , officially known as both Russia and the Russian Federation , is a country in northern Eurasia. It is a federal semi-presidential republic, comprising 83 federal subjects...
that lie within Europe
Europe
Europe is, by convention, one of the world's seven continents. Comprising the westernmost peninsula of Eurasia, Europe is generally 'divided' from Asia to its east by the watershed divides of the Ural and Caucasus Mountains, the Ural River, the Caspian and Black Seas, and the waterways connecting...
, comprising roughly 3,960,000 square kilometres (1,528,560 mi²), larger in area than India, and spanning across 40% of Europe. Its eastern border is defined by the Ural Mountains
Ural Mountains
The Ural Mountains , or simply the Urals, are a mountain range that runs approximately from north to south through western Russia, from the coast of the Arctic Ocean to the Ural River and northwestern Kazakhstan. Their eastern side is usually considered the natural boundary between Europe and Asia...
and in the south it is defined by the border with Kazakhstan
Kazakhstan
Kazakhstan , officially the Republic of Kazakhstan, is a transcontinental country in Central Asia and Eastern Europe. Ranked as the ninth largest country in the world, it is also the world's largest landlocked country; its territory of is greater than Western Europe...
. This area includes Moscow
Moscow
Moscow is the capital, the most populous city, and the most populous federal subject of Russia. The city is a major political, economic, cultural, scientific, religious, financial, educational, and transportation centre of Russia and the continent...
and St. Petersburg
Saint Petersburg
Saint Petersburg is a city and a federal subject of Russia located on the Neva River at the head of the Gulf of Finland on the Baltic Sea...
, the two largest cities of Russia.

Roughly 78% of the entire Russian population (about 110,000,000 people out of an approximate total Russian population of 141,000,000) lives in European Russia, at an average of 27 persons per km² (10.5 per mi²). However, 75% of Russia's territory lies within Asia
Asia
Asia is the world's largest and most populous continent, located primarily in the eastern and northern hemispheres. It covers 8.7% of the Earth's total surface area and with approximately 3.879 billion people, it hosts 60% of the world's current human population...
and accommodates only 22% of its population at 2.5 persons per km² (0.95 per mi²).

The term "European Russia" was used in the Russian Empire
Russian Empire
The Russian Empire was a state that existed from 1721 until the Russian Revolution of 1917. It was the successor to the Tsardom of Russia and the predecessor of the Soviet Union...
to refer to traditional East Slavic
East Slavs
The East Slavs are Slavic peoples speaking East Slavic languages. Formerly the main population of the medieval state of Kievan Rus, by the seventeenth century they evolved into the Russian, Ukrainian, and Belarusian peoples.-Sources:...
territories under Russian control, including what is now Belarus
Belarus
Belarus , officially the Republic of Belarus, is a landlocked country in Eastern Europe, bordered clockwise by Russia to the northeast, Ukraine to the south, Poland to the west, and Lithuania and Latvia to the northwest. Its capital is Minsk; other major cities include Brest, Grodno , Gomel ,...
and most of Ukraine
Ukraine
Ukraine is a country in Eastern Europe. It has an area of 603,628 km², making it the second largest contiguous country on the European continent, after Russia...
(Dnieper Ukraine
Dnieper Ukraine
Dnieper Ukraine , was the territory of Ukraine in the Russian Empire , roughly corresponding to the current territory of Ukraine, with the exceptions of the Black Sea peninsula of Crimea and Galicia in the west, which was a province of the Austrian Empire. Galicians sometimes call it Great Ukraine...
).
The source of this article is wikipedia, the free encyclopedia.  The text of this article is licensed under the GFDL.