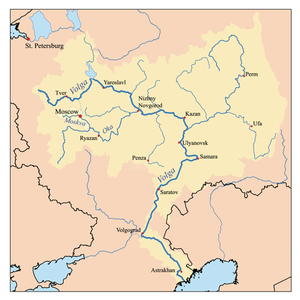 The Moskva River is a river that flows through the Moscow
Moscow Oblast
Moscow Oblast , or Podmoskovye , is a federal subject of Russia . Its area, at , is relatively small compared to other federal subjects, but it is one of the most densely populated regions in the country and, with the 2010 population of 7,092,941, is the second most populous federal subject...
and Smolensk Oblast
Smolensk Oblast
Smolensk Oblast is a federal subject of Russia . Its area is . Population: -Geography:The administrative center of Smolensk Oblast is the city of Smolensk. Other ancient towns include Vyazma and Dorogobuzh....
s in Russia
Russia
Russia or , officially known as both Russia and the Russian Federation , is a country in northern Eurasia. It is a federal semi-presidential republic, comprising 83 federal subjects...
, and is a tributary
Tributary
A tributary or affluent is a stream or river that flows into a main stem river or a lake. A tributary does not flow directly into a sea or ocean...
of the Oka River
Oka River
Oka is a river in central Russia, the largest right tributary of the Volga. It flows through the regions of Oryol, Tula, Kaluga, Moscow, Ryazan, Vladimir, and Nizhny Novgorod and is navigable over a large part of its total length, as far upstream as to the town of Kaluga. Its length exceeds...
.

The length of the river is 503 km. The area of its drainage basin
Drainage basin
A drainage basin is an extent or an area of land where surface water from rain and melting snow or ice converges to a single point, usually the exit of the basin, where the waters join another waterbody, such as a river, lake, reservoir, estuary, wetland, sea, or ocean...
is 17,600 km². Vertical level drop is 155 metres (long-term average). Maximum depth above Moscow city limits - 3 metres, and up to 6 metres below it
. Normally, it freezes in November–December and begins to thaw around late March. In downtown Moscow, the river freezes occasionally; in an unusually warm winter of 2006-2007, ice began setting on January, 25.
Absolute water level in downtown Moscow is 120.0 metres above sea level (long-term average of summer lows after World War II
World War II
World War II, or the Second World War , was a global conflict lasting from 1939 to 1945, involving most of the world's nations—including all of the great powers—eventually forming two opposing military alliances: the Allies and the Axis...
), historical maximum was set by the 1908 flood - 127.25 metres above sea level.

Main tributaries are the Ruza
Ruza River
Ruza River is a river in the Moscow Oblast in Russia, left tributary of the Moscow River. The length of the river is 145 km. The area of its basin is 1,990 km². It usually freezes in November and stays under the ice until April....
, Istra
Istra River
Istra is a river in Moscow Oblast, Russia.It is the left tributary of the Moskva River....
, Yauza
Yauza River
This article is about a river in Moscow, a tributary of the Moskva River. There are three other Yauza rivers in Central Russia: tributaries of the Lama, Gzhat and Sestra....
, Pakhra
Pakhra River
The Pakhra River is a river in the Moscow Oblast in Russia, a right tributary of the Moskva River. It is 135 km in length. The area of its basin is 2580 km². The Pakhra River freezes up in November - December and stays under the ice until the late March - April. Main tributaries: Mocha,...
, and Severka rivers. Sources of water are estimated as 61% thaw, 12% rain and 27% subterranean. After completion of Moscow Canal
Moscow Canal
The Moscow Canal , named the Moscow-Volga Canal until the year 1947, is a canal that connects the Moskva River with the main transportation artery of European Russia, the Volga River. It is located in Moscow itself and in the Moscow Oblast...
(1932–1937), Moskva River also collects a share of Upper Volga water. This enabled reliable commercial shipping, which was previously interrupted by summer droughts (older dams built in 1785, 1836 and 1878 were not effective). Average discharge
Discharge (hydrology)
In hydrology, discharge is the volume rate of water flow, including any suspended solids , dissolved chemical species and/or biologic material , which is transported through a given cross-sectional area...
, including Volga waters, varies from 38 m³/s near Zvenigorod
Zvenigorod
Zvenigorod is an old town in Moscow Oblast, Russia. Population: -History:The community has existed since the 12th century, although its first written mention is dated 1338. The town's name is based either on a personal name or on a hydronym Zvenigorod is an old town in Moscow Oblast, Russia....
to 250 m³/s at Oka inlet. Flow speed, depending on the season, varies from 0.1 m/s (winter, dams closed) to 1.5-2.0 m/s (may, dams open).

Moscow
Moscow
Moscow is the capital, the most populous city, and the most populous federal subject of Russia. The city is a major political, economic, cultural, scientific, religious, financial, educational, and transportation centre of Russia and the continent...
(Москва́), the capital of Russia, is situated on its banks. The river also flows through the towns of Mozhaysk
Mozhaysk
Mozhaysk is a town and the administrative center of Mozhaysky District of Moscow Oblast, Russia, located to the west from the Russian capital, on the historic road leading to Smolensk and then to Poland. Population:...
, Zvenigorod
Zvenigorod
Zvenigorod is an old town in Moscow Oblast, Russia. Population: -History:The community has existed since the 12th century, although its first written mention is dated 1338. The town's name is based either on a personal name or on a hydronym Zvenigorod is an old town in Moscow Oblast, Russia....
, Zhukovsky, Bronnitsy
Bronnitsy
Bronnitsy is a town in Moscow Oblast, Russia, located southeast of downtown Moscow and west of Bronnitsy station of the Moscow-Ryazan railroad. The town lies geographically within Ramensky District but is administratively incorporated as a town under oblast jurisdiction...
, Voskresensk
Voskresensk
Voskresensk is a town in Moscow Oblast, Russia, located southeast from Moscow, on the shores of the Moskva River. Population: Town status was granted to Voskresensk in 1938.-Notable athletes:...
, and — at the confluence of the Moskva and Oka — Kolomna
Kolomna
Kolomna is an ancient city and the administrative center of Kolomensky District of Moscow Oblast, Russia, situated at the confluence of the Moskva and Oka Rivers, southeast of Moscow. The area of the city is about . The city was founded in 1177...
. In 2007, there are 49 bridges across Moskva River and its canals within Moscow city limits; the first stone bridge
Bolshoi Kamennyi Bridge
Bolshoy Kamenny Bridge is a steel arch bridge spanning Moskva River at the western end of the Moscow Kremlin. Its predecessor was the first permanent stone bridge in Moscow, Russia...
was erected in 1692. Within the city, river is 120–200 metres wide, the narrowest point exactly under the Kremlin
Kremlin
A kremlin , same root as in kremen is a major fortified central complex found in historic Russian cities. This word is often used to refer to the best-known one, the Moscow Kremlin, or metonymically to the government that is based there...
walls. Drinking water for the city of Moscow is collected from five stations on Moskva River and Upper Volga reservoirs (north and north-west from the city).

Canals, built within Moscow
Moscow
Moscow is the capital, the most populous city, and the most populous federal subject of Russia. The city is a major political, economic, cultural, scientific, religious, financial, educational, and transportation centre of Russia and the continent...
city limits, form a number of islands. Some of them have names in Russian, some have none. Major, permanent islands (east to west) are: