Historic use of courtyards

Courtyards—private open spaces surrounded by walls or buildings—have been in use in residential architecture
Architecture
Architecture is both the process and product of planning, designing and construction. Architectural works, in the material form of buildings, are often perceived as cultural and political symbols and as works of art...
for almost as long as people have lived in constructed dwellings. The earliest known courtyard houses were built in Iran
Iran
Iran , officially the Islamic Republic of Iran , is a country in Southern and Western Asia. The name "Iran" has been in use natively since the Sassanian era and came into use internationally in 1935, before which the country was known to the Western world as Persia...
and China
China
Chinese civilization may refer to:* China for more general discussion of the country.* Chinese culture* Greater China, the transnational community of ethnic Chinese.* History of China* Sinosphere, the area historically affected by Chinese culture...
and date as far back as 3000 BC. Courtyards have historically been used for many purposes including cooking, sleeping, working, playing, gardening, and even places to keep animals.

Before courtyards, open fires were kept burning in a central place within a home, with only a small hole in the ceiling
Ceiling
A ceiling is an overhead interior surface that covers the upper limit of a room. It is generally not a structural element, but a finished surface concealing the underside of the floor or roof structure above....
overhead to allow smoke
Smoke
Smoke is a collection of airborne solid and liquid particulates and gases emitted when a material undergoes combustion or pyrolysis, together with the quantity of air that is entrained or otherwise mixed into the mass. It is commonly an unwanted by-product of fires , but may also be used for pest...
to escape. Over time, these small openings were enlarged and eventually led to the development of the centralized open courtyard we know today. Courtyard homes have been designed and built throughout the world with many variations.

Courtyard homes are more prevalent in temperate climates, as an open central court can be an important aid to cooling house in warm weather. However, courtyard houses have been found in harsher climates as well for centuries. The comforts offered by a courtyard—air, light, privacy
Privacy
Privacy is the ability of an individual or group to seclude themselves or information about themselves and thereby reveal themselves selectively...
, security, and tranquility—are properties nearly universally desired in human housing.


Comparison of courtyard houses throughout the world 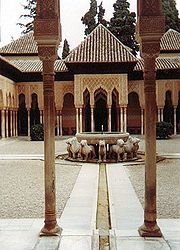 Ur
Ur
Ur was an important city-state in ancient Sumer located at the site of modern Tell el-Muqayyar in Iraq's Dhi Qar Governorate...
, 2000 BC — two-story houses constructed around an open square were built of fired brick. Kitchen
Kitchen
A kitchen is a room or part of a room used for cooking and food preparation.In the West, a modern residential kitchen is typically equipped with a stove, a sink with hot and cold running water, a refrigerator and kitchen cabinets arranged according to a modular design. Many households have a...
, working, and public spaces were located on the ground floor, with private rooms located upstairs.

The central uncovered area in a Roman domus
Domus
In ancient Rome, the domus was the type of house occupied by the upper classes and some wealthy freedmen during the Republican and Imperial eras. They could be found in almost all the major cities throughout the Roman territories...
was referred to as an atrium
Atrium (architecture)
In modern architecture, an atrium is a large open space, often several stories high and having a glazed roof and/or large windows, often situated within a larger multistory building and often located immediately beyond the main entrance doors...
. Today, we generally use the term courtyard to refer to such an area, reserving the word atrium to describe a glass-covered courtyard. Roman atrium houses were built side by side along the street. They were one-story homes without windows that took in light from the entrance and from the center atrium. The hearth, which used to inhabit the center of the home, was relocated, and the Roman atrium most often contained a central pool used to collect rainwater, called an impluvium
Impluvium
The impluvium is the sunken part of the atrium in a Greek or Roman house . Designed to carry away the rainwater coming through the compluvium of the roof, it is usually made of marble and placed about 30 cm below the floor of the atrium.The name is also used for a type of dwelling typical of...
. These homes frequently incorporated a second open-air area, the garden, which would be surrounded by Greek-style colonnade
Colonnade
In classical architecture, a colonnade denotes a long sequence of columns joined by their entablature, often free-standing, or part of a building....
s, forming a peristyle
Peristyle
In Hellenistic Greek and Roman architecture a peristyle is a columned porch or open colonnade in a building surrounding a court that may contain an internal garden. Tetrastoon is another name for this feature...
. This created a colonnaded walkway around the perimeter of the courtyard, which influenced monastic structures centuries later.

Courtyard houses in the Middle East
Middle East
The Middle East is a region that encompasses Western Asia and Northern Africa. It is often used as a synonym for Near East, in opposition to Far East...
reflect the nomadic influences of the region. Instead of officially designating rooms for cooking, sleeping, etc., these activities were relocated throughout the year as appropriate to accommodate the changes in temperature and the location of the sun. Often the flat rooftops of these structures were used for sleeping in warm weather. In some Islamic cultures, private courtyards provide the only outdoor space for women to relax unobserved.

The traditional Chinese courtyard house, e.g., siheyuan
Siheyuan
A siheyuan is a historical type of residence that was commonly found throughout China, most famously in Beijing. In English, siheyuan are sometimes referred to as Chinese quadrangles. The name literally means a courtyard surrounded by four buildings...
, is an arrangement of several individual houses around a square. Each house belongs to a different family member, and additional houses are created behind this arrangement to accommodate additional family members as needed. The Chinese courtyard is a place of privacy and tranquility, almost always incorporating a garden and water feature. In some cases, houses are constructed with multiple courtyards that increase in privacy as they recede from the street. Strangers would be received in the outermost courtyard, with the innermost ones being reserved for close friends and family members.
In a more contemporary version of the Chinese model, a courtyard can also can be used to separate a home into wings; for example, one wing of the house may be for entertaining/dining, and the other wing may be for sleeping/family/privacy. This is exemplified by the Hooper House in Baltimore, MD.

The medieval European farmhouse embodies what we think of today as one of the most archetypal examples of a courtyard house—four buildings arranged around a square courtyard with a steep roof covered by thatch. The central courtyard was used for working, gathering, and sometimes keeping small livestock. An elevated walkway frequently ran around two or three sides of the courtyards in the houses. Such structures afforded protection, and could even be made defensible.

In the first half of the 20th century, a trend developed in Los Angeles
Los Ángeles
Los Ángeles is the capital of the province of Biobío, in the commune of the same name, in Region VIII , in the center-south of Chile. It is located between the Laja and Biobío rivers. The population is 123,445 inhabitants...
around Courtyard houses. Designers such as the Davis family and the Zwebell family developed houses that only visually appeared to mimic Mediterranean architecture, but using very carefully planned courtyards managed to create both a sense of community, safety and scale. Using various levels of private/public gradations these courtyard houses were so successful that they have been copied throughout the western coast of the United States. They are so typical for Los Angeles that several TV series were recorded, among others, Melrose Place.


Relevance to the architecture of today

More and more, architects are investigating ways that courtyards can play a role in the development of today's homes and cities. In densely populated areas, a courtyard in a home can provide privacy for a family, a break from the frantic pace of everyday life, and a safe place for children to play. With space at a premium, architects are experimenting with courtyards as a way to provide outdoor space for small communities of people at a time. A courtyard surrounded by 12 houses, for example, would provide a shared park-like space for those families, who could take pride in ownership of the space. Though this might sound like a modern-day solution to an inner city problem, the grouping of houses around a shared courtyard was common practice among the Incas
Inca Empire
The Inca Empire, or Inka Empire , was the largest empire in pre-Columbian America. The administrative, political and military center of the empire was located in Cusco in modern-day Peru. The Inca civilization arose from the highlands of Peru sometime in the early 13th century...
as far back as the 13th century BC
13th century BC
The 13th century BC was the period from 1300 to 1201 BC.-Events:*1300 BC: Cemetery H culture comes to an end.*1292 BC: End of the Eighteenth dynasty of Egypt, start of the Nineteenth Dynasty....
.

In San Francisco
San Francisco, California
San Francisco , officially the City and County of San Francisco, is the financial, cultural, and transportation center of the San Francisco Bay Area, a region of 7.15 million people which includes San Jose and Oakland...
, the floor plans of "marina style" houses often include a central patio
Patio
A patio is an outdoor space generally used for dining or recreation that adjoins a residence and is typically paved. It may refer to a roofless inner courtyard of the sort found in Spanish-style dwellings or a paved area between a residence and a garden....
, a miniature version of an open courtyard, sometimes covered with glass or a translucent material. Central patios provide natural light to common areas and space for potted outdoor plants. In the Northern Areas of Pakistan, Gilgit/Baltistan, the history of courtyard is slightly different from the rest of the world. People used it for general gathering because people were live in cluster houses. It is called to be the meeting place, where the village related issued discussed, but it is different from the "Jirgah" which is the tradition of tribal areas of Pakistan. Now people use the courtyard for gardening and other purposes.