Encyclopedia
Lakewood is a city in Cuyahoga County
Cuyahoga County, Ohio
Cuyahoga County is a county located in the state of Ohio, United States. It is the most populous county in Ohio; as of the 2010 census, the population was 1,280,122. Its county seat is Cleveland. Cuyahoga County is part of Greater Cleveland, a metropolitan area, and Northeast Ohio, a...
, Ohio
Ohio
Ohio is a Midwestern state in the United States. The 34th largest state by area in the U.S.,it is the 7th‑most populous with over 11.5 million residents, containing several major American cities and seven metropolitan areas with populations of 500,000 or more.The state's capital is Columbus...
, United States
United States
The United States of America is a federal constitutional republic comprising fifty states and a federal district...
. It is part of the Greater Cleveland
Greater Cleveland
Greater Cleveland is a nickname for the metropolitan area surrounding Cleveland, Ohio and is part of what used to be the Connecticut Western Reserve.Northeast Ohio refers to a similar but substantially larger area as described below...
Metropolitan Area, and borders the city of Cleveland. The population was 52,131 at the 2010
United States Census, 2010
The Twenty-third United States Census, known as Census 2010 or the 2010 Census, is the current national census of the United States. National Census Day was April 1, 2010 and is the reference date used in enumerating individuals...
making it the third largest city in Cuyahoga County, behind Cleveland
Cleveland, Ohio
Cleveland is a city in the U.S. state of Ohio and is the county seat of Cuyahoga County, the most populous county in the state. The city is located in northeastern Ohio on the southern shore of Lake Erie, approximately west of the Pennsylvania border...
(396,815) and Parma
Parma, Ohio
Parma is a city in Cuyahoga County, Ohio, United States. It is the largest suburb of Cleveland and the seventh largest city in the state of Ohio...
(81,601).

Lakewood, one of Cleveland's inner-ring suburbs, borders the city of Cleveland to the west and north. Lakewood's population density is the highest of any city in Ohio and is roughly comparable to that of Washington, DC.

Lakewood is governed by an elected mayor and elected council. The council's strength is seven, with 4 members representing wards in the city and other three are at large council members. Lakewood is represented in the US House of Representatives by Rep. Dennis Kucinich(OH-10,D). In the state assembly it is represented by Michael Skindell (D) in the State Senate and by Nickie Antonio (D) in the State House.
The expected expenditure for 2010 for the City of Lakewood is $33.7 Million with the city bringing in revenues of $ 34.03 Million. The current income tax is 1.5%, one of Ohio's lowest municipal income tax rates.

Lakewood is located at 41°28′51"N 81°48′1"W (41.480881, -81.800360), about 6 miles (9.7 km) west of downtown
Downtown Cleveland
Downtown Cleveland is the central business district of the City of Cleveland and Northeast Ohio. Reinvestment in the area in the mid-1990s spurred a rebirth that continues to this day, with over $2 billion in residential and commercial developments slated for the area over the next few years...
Cleveland
Cleveland, Ohio
Cleveland is a city in the U.S. state of Ohio and is the county seat of Cuyahoga County, the most populous county in the state. The city is located in northeastern Ohio on the southern shore of Lake Erie, approximately west of the Pennsylvania border...
.

As of the 2007 American Community Survey, there were 54,765 people, 24,898 households, and 12,212 families residing in the city. The population density
Population density
Population density is a measurement of population per unit area or unit volume. It is frequently applied to living organisms, and particularly to humans...
was 9,957.3 inhabitants per square mile (3,803.2/km²), making it more densely populated than Los Angeles, California
Los Angeles, California
Los Angeles , with a population at the 2010 United States Census of 3,792,621, is the most populous city in California, USA and the second most populous in the United States, after New York City. It has an area of , and is located in Southern California...
. There were 27,806 housing units at an average density of 5,055.6 per square mile (1,931.0/km²). The racial makeup of the city was 92.9% White, 5.2% Black, 0.1% American Indian, 1.3% Asian, 0.8% from other races
Race (United States Census)
Race and ethnicity in the United States Census, as defined by the Federal Office of Management and Budget and the United States Census Bureau, are self-identification data items in which residents choose the race or races with which they most closely identify, and indicate whether or not they are...
, and 1.8% from two or more races. Hispanic or Latino of any race were 3.5% of the population. Ethnic groups include Germans
Germans
The Germans are a Germanic ethnic group native to Central Europe. The English term Germans has referred to the German-speaking population of the Holy Roman Empire since the Late Middle Ages....
(28.2%), Irish
Irish people
The Irish people are an ethnic group who originate in Ireland, an island in northwestern Europe. Ireland has been populated for around 9,000 years , with the Irish people's earliest ancestors recorded having legends of being descended from groups such as the Nemedians, Fomorians, Fir Bolg, Tuatha...
(23.5%), English
English people
The English are a nation and ethnic group native to England, who speak English. The English identity is of early mediaeval origin, when they were known in Old English as the Anglecynn. England is now a country of the United Kingdom, and the majority of English people in England are British Citizens...
(11.6%), Italians
Italian people
The Italian people are an ethnic group that share a common Italian culture, ancestry and speak the Italian language as a mother tongue. Within Italy, Italians are defined by citizenship, regardless of ancestry or country of residence , and are distinguished from people...
(10.2%), Poles
Poles
thumb|right|180px|The state flag of [[Poland]] as used by Polish government and diplomatic authoritiesThe Polish people, or Poles , are a nation indigenous to Poland. They are united by the Polish language, which belongs to the historical Lechitic subgroup of West Slavic languages of Central Europe...
(9.5%), Slovaks
Slovaks
The Slovaks, Slovak people, or Slovakians are a West Slavic people that primarily inhabit Slovakia and speak the Slovak language, which is closely related to the Czech language.Most Slovaks today live within the borders of the independent Slovakia...
(4.3%), and Arab
Arab
Arab people, also known as Arabs , are a panethnicity primarily living in the Arab world, which is located in Western Asia and North Africa. They are identified as such on one or more of genealogical, linguistic, or cultural grounds, with tribal affiliations, and intra-tribal relationships playing...
(4.3%).

There were 24,898 households out of which 23.6% had children under the age of 18 living with them, 34.2% were married couples
Marriage
Marriage is a social union or legal contract between people that creates kinship. It is an institution in which interpersonal relationships, usually intimate and sexual, are acknowledged in a variety of ways, depending on the culture or subculture in which it is found...
living together, 11.2% had a female householder with no husband present, and 51.0% were non-families. 42.4% of all households were made up of individuals and 9.1% had someone living alone who was 65 years of age or older. The average household size was 2.17 and the average family size was 3.05.

The median income for a household in the city was $42,602, and the median income for a family was $59,201. Males had a median income of $42,599 versus $35,497 for females. The per capita income
Per capita income
Per capita income or income per person is a measure of mean income within an economic aggregate, such as a country or city. It is calculated by taking a measure of all sources of income in the aggregate and dividing it by the total population...
for the city was $26,939. About 10.9% of families and 14.3% of the population were below the poverty line, including 20.3% of those under age 18 and 10.5% of those age 65 or over.

Lakewood is a hotspot for immigrants arrival mostly from Middle East and Albania. The foreign born population was 8.7% in 2007 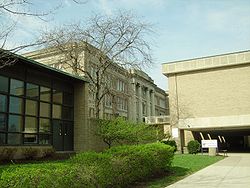 The City of Lakewood Public School System is managed by a directly elected school board. The Lakewood City Schools has been rated Excellent by the Ohio Dept. of Education. Lakewood boasts brand new elementary schools and middle schools. The high school is under renovation. Two more elementary schools are slated to be rebuilt or renovated in the next two years. The investment is the first major school building program in Lakewood since 1920. The Lakewood school system is one of the largest employers in the city of Lakewood. 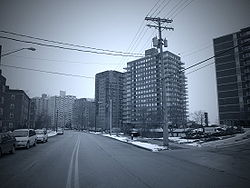 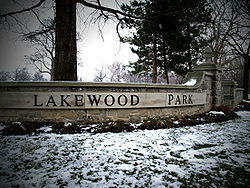 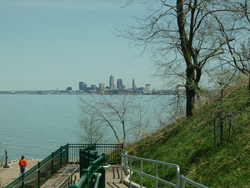 Lakewood is home to a rather large number of high rises. While there are high rises throughout the city, most are concentrated in two areas: Gold Coast
Lakewood Gold Coast
The Gold Coast is a lakefront neighborhood of the city of Lakewood, Ohio, United States. Visible from downtown Cleveland, the Gold Coast consists of many highrise condo and apartment towers directly along the coasts of Lake Erie. The Gold Coast runs specifically along Edgewater Drive and Lake...
and in downtown Lakewood.