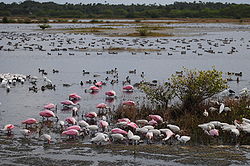 Merritt Island National Wildlife Refuge is located due east of Titusville
Titusville, Florida
Titusville is a city in Brevard County, Florida in the United States. It is the county seat of Brevard County. Nicknamed Space City, USA, Titusville is on the Indian River, west of Merritt Island and the Kennedy Space Center and south-southwest of the Canaveral National Seashore...
on Merritt Island
Merritt Island, Florida
Merritt Island is a census-designated place in Brevard County, Florida, United States. It is located on the east coast of the state on the Atlantic Ocean. As of the 2000 census, the population was 36,090. It is part of the Palm Bay – Melbourne – Titusville, Florida Metropolitan Statistical Area...
in Brevard County, Florida
Brevard County, Florida
Brevard County is a county located in the U.S. state of Florida, along the coast of the Atlantic Ocean. As of 2007 U.S. Census Bureau estimates, the population is 536,521, making it the 10th most populous county in the state. Influenced by the presence of the John F. Kennedy Space Center, Brevard...
, and occupies 570 square kilometres (140,849.9 acre). To the north, it borders on the Canaveral National Seashore
Canaveral National Seashore
The Canaveral National Seashore is a National Seashore located between New Smyrna Beach and Titusville, Florida, in Volusia County and Brevard County, United States. The park, located on a barrier island, is home to more than 1,000 plant species and 310 bird species. CANA occupies 58,000 acres ...
; to the south it borders on the Kennedy Space Center
Kennedy Space Center
The John F. Kennedy Space Center is the NASA installation that has been the launch site for every United States human space flight since 1968. Although such flights are currently on hiatus, KSC continues to manage and operate unmanned rocket launch facilities for America's civilian space program...
(with which it also shares some history), which in turn abuts Cape Canaveral Air Force Station
Cape Canaveral Air Force Station
Cape Canaveral Air Force Station is an installation of the United States Air Force Space Command's 45th Space Wing, headquartered at nearby Patrick Air Force Base. Located on Cape Canaveral in the state of Florida, CCAFS is the primary launch head of America's Eastern Range with four launch pads...
. Mosquito Lagoon
Mosquito Lagoon
Mosquito Lagoon is located in the northern part of the Indian River Lagoon system and the Atlantic Intracoastal Waterway. It extends from Ponce de León Inlet in Volusia County, Florida, to the north end of Merritt Island. It connects to the Indian River via the Haulover Canal. The Lagoon divides...
and the Indian River
Indian River (Florida)
The Indian River is a waterway in Florida, a part of the Indian River Lagoon system which forms the Atlantic Intracoastal Waterway. It extends southward from the Ponce de Leon inlet in New Smyrna Beach, Florida [Volusia County] southward and across the "Haulover Canal" and along the western shore...
run through the refuge. Since public access to all these areas is controlled in various ways, the refuge is part of a very substantial area of relatively undisturbed wildlife habitat.

The land occupied by the NWR was acquired by NASA
NASA
The National Aeronautics and Space Administration is the agency of the United States government that is responsible for the nation's civilian space program and for aeronautics and aerospace research...
in the early 1960s for the development of the Space Center and its non-operational purposes. Until that time there had been little development in the area because of the high number of salt marsh mosquito
Mosquito
Mosquitoes are members of a family of nematocerid flies: the Culicidae . The word Mosquito is from the Spanish and Portuguese for little fly...
es. Public access is normally permitted, and several state highway
State highway
State highway, state road or state route can refer to one of three related concepts, two of them related to a state or provincial government in a country that is divided into states or provinces :#A...
s run across the refuge; however, the public can be excluded if necessary for NASA's purposes (for example, this is currently done in the days before a space shuttle
Space Shuttle
The Space Shuttle was a manned orbital rocket and spacecraft system operated by NASA on 135 missions from 1981 to 2011. The system combined rocket launch, orbital spacecraft, and re-entry spaceplane with modular add-ons...
launch or landing).

The refuge provides a range of habitats, from saltwater estuaries
Estuary
An estuary is a partly enclosed coastal body of water with one or more rivers or streams flowing into it, and with a free connection to the open sea....
and freshwater impoundments and marshes, to dune
Dune
In physical geography, a dune is a hill of sand built by wind. Dunes occur in different forms and sizes, formed by interaction with the wind. Most kinds of dunes are longer on the windward side where the sand is pushed up the dune and have a shorter "slip face" in the lee of the wind...
s, hardwood
Hardwood
Hardwood is wood from angiosperm trees . It may also be used for those trees themselves: these are usually broad-leaved; in temperate and boreal latitudes they are mostly deciduous, but in tropics and subtropics mostly evergreen.Hardwood contrasts with softwood...
hammocks
Hammock (ecology)
Hammocks are dense stands of hardwood trees that grow on natural rises of only a few inches higher than surrounding marshland that is otherwise too wet to support them. Hammocks are distinctive in that they are formed gradually over thousands of years rising in a wet area through the deposits of...
, and scrub. It is therefore rich in over 1000 species of plants, 117 species of fish
Fish
Fish are a paraphyletic group of organisms that consist of all gill-bearing aquatic vertebrate animals that lack limbs with digits. Included in this definition are the living hagfish, lampreys, and cartilaginous and bony fish, as well as various extinct related groups...
, 68 amphibians and reptile
Reptile
Reptiles are members of a class of air-breathing, ectothermic vertebrates which are characterized by laying shelled eggs , and having skin covered in scales and/or scutes. They are tetrapods, either having four limbs or being descended from four-limbed ancestors...
s, 330 bird
Bird
Birds are feathered, winged, bipedal, endothermic , egg-laying, vertebrate animals. Around 10,000 living species and 188 families makes them the most speciose class of tetrapod vertebrates. They inhabit ecosystems across the globe, from the Arctic to the Antarctic. Extant birds range in size from...
s, and 31 mammal
Mammal
Mammals are members of a class of air-breathing vertebrate animals characterised by the possession of endothermy, hair, three middle ear bones, and mammary glands functional in mothers with young...
species. Of these species, 21 are listed as endangered either by the state of Florida or by the US federal government. The following are some of the more important species using the refuge; most of them nest there:

Subject to the needs of NASA, public access is relatively unrestricted, though it is only allowed during daylight hours; camping
Camping
Camping is an outdoor recreational activity. The participants leave urban areas, their home region, or civilization and enjoy nature while spending one or several nights outdoors, usually at a campsite. Camping may involve the use of a tent, caravan, motorhome, cabin, a primitive structure, or no...
is only allowed for certain organised youth organizations.

The refuge provides hiking
Hiking
Hiking is an outdoor activity which consists of walking in natural environments, often in mountainous or other scenic terrain. People often hike on hiking trails. It is such a popular activity that there are numerous hiking organizations worldwide. The health benefits of different types of hiking...
and driving trails for visitors, with excellent opportunities for observing wildlife without causing disturbance; most of the species listed above can be seen by a casual visitor. An observation deck is provided near the drawbridge
Bascule bridge
A bascule bridge is a moveable bridge with a counterweight that continuously balances the span, or "leaf," throughout the entire upward swing in providing clearance for boat traffic....
that carries State Road 3
State Road 3 (Florida)
State Road 3, also known as North Courtenay Parkway, is a north–south road serving as the southern access for the Kennedy Space Center near Cape Canaveral, Florida. The shortest of the one-digit Florida State Roads, its southern terminus is an intersection with SR 520 on Merritt Island, east...
over the Haulover Canal, in the northern part of the refuge, since manatees frequently congregate there. Boating is permitted on the waters around and within the refuge, and provides another excellent opportunity for observing the wildlife; there are facilities for launching pleasure boats at several places. In addition the refuge includes, and gives access to the unspoilt Playalinda Beach
Playalinda Beach
Playalinda Beach is a beach located on Florida's east coast in Canaveral National Seashore. When translated from Spanish, Playa linda is "pretty beach". The beach is open to the public daily between 6:00 am to 6:00 pm in the winter and 6:00 am to 8:00 pm in the summer...
on the outer barrier island. Fishing
Fishing
Fishing is the activity of trying to catch wild fish. Fish are normally caught in the wild. Techniques for catching fish include hand gathering, spearing, netting, angling and trapping....
is generally permitted, and hunting
Hunting
Hunting is the practice of pursuing any living thing, usually wildlife, for food, recreation, or trade. In present-day use, the term refers to lawful hunting, as distinguished from poaching, which is the killing, trapping or capture of the hunted species contrary to applicable law...
for wildfowl is allowed on a strictly limited basis. There is a comprehensive Visitor Center.

Water levels are controlled in most of the refuge, to conserve its wide range of habitats. Controlled fires are used regularly.

Merritt Island acts as an administrative centre for a number of other NWRs in central Florida, which are operated as satellites from it, including:

Kennedy Parkway traverses through the John F. Kennedy Space Center and the refuge. In the John F. Kennedy Space Center, it is 12.21 miles long with a divided highway
Divided Highway
Divided Highway is a compilation album by American rock band The Doobie Brothers, released in 2003. . All tracks are taken from the albums Cycles and Brotherhood .-Track listing:...
. North of Beach Road, it is two lanes wide. In total, it is 28.36 miles long, from the southern border of the Space Center to U.S. 1
U.S. Route 1 in Florida
U.S. Route 1 in Florida runs along the state's east coast from Key West to its crossing of the St. Marys River into Georgia north of Boulogne, and south of Folkston. US 1 was designated through Florida when the U.S. Highway System was established in 1926.US 1 runs in the state of Florida, and...
, near Oak Hill
Oak Hill, Florida
Oak Hill is a city in Volusia County, Florida, United States. The population was 1,378 at the 2000 census. As of 2004, the population recorded by the U.S. Census Bureau is 1,454.-History:...
. North of Dummit Grove, it forms the western boundary of the Canaveral National Seashore.