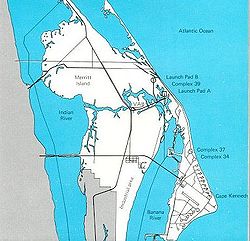 It was originally named Rio de Ais after the Ais
Ais (tribe)
The Ais, or Ays were a tribe of Native Americans who inhabited the Atlantic Coast of Florida. They ranged from present day Cape Canaveral to the St. Lucie Inlet, in the present day counties of Brevard, Indian River, St. Lucie and northernmost Martin...
Indian tribe, who lived along the east coast of Florida
Florida
Florida is a state in the southeastern United States, located on the nation's Atlantic and Gulf coasts. It is bordered to the west by the Gulf of Mexico, to the north by Alabama and Georgia and to the east by the Atlantic Ocean. With a population of 18,801,310 as measured by the 2010 census, it...
.

It is broad, shallow, and 121 mi (194.7 km) long. It is an estuarine
Estuary
An estuary is a partly enclosed coastal body of water with one or more rivers or streams flowing into it, and with a free connection to the open sea....
system where freshwater meets salt water within the same body of water.

At certain seasons of the year, bridges have tended to impede the flow of red drift algae
Gracilaria
Gracilaria is a genus of red algae notable for its economic importance as an agarophyte, as well as its use as a food for humans and various species of shellfish...
, resulting in a odor of hydrogen sulfide
Hydrogen sulfide
Hydrogen sulfide is the chemical compound with the formula . It is a colorless, very poisonous, flammable gas with the characteristic foul odor of expired eggs perceptible at concentrations as low as 0.00047 parts per million...
in the area.