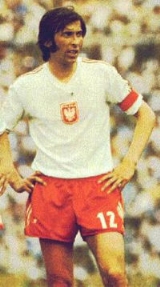 Encyclopedia
Kazimierz Deyna was a Polish
Poland
Poland , officially the Republic of Poland , is a country in Central Europe bordered by Germany to the west; the Czech Republic and Slovakia to the south; Ukraine, Belarus and Lithuania to the east; and the Baltic Sea and Kaliningrad Oblast, a Russian exclave, to the north...
footballer, who played as an offensive midfielder
Midfielder
A midfielder is an association football position. Some midfielders play a more defensive role, while others blur the boundaries between midfielders and forwards. The number of midfielders a team uses during a match may vary, depending on the team's formation and each individual player's role...
in the playmaker
Playmaker
In association football, a playmaker is a player who controls the flow of the team's offensive play, and is often involved in passing moves which lead to goals....
role and was one of the most highly regarded players of his generation.

Kazimierz Deyna was born in Starogard Gdański
Starogard Gdanski
Starogard Gdański is a town in Eastern Pomerania in northwestern Poland with 48,328 inhabitants...
to Franciszek (1911–1976) – a dairy
Dairy
A dairy is a business enterprise established for the harvesting of animal milk—mostly from cows or goats, but also from buffalo, sheep, horses or camels —for human consumption. A dairy is typically located on a dedicated dairy farm or section of a multi-purpose farm that is concerned...
worker, and Jadwiga (1917–1981) – a housewife
Housewife
Housewife is a term used to describe a married woman with household responsibilities who is not employed outside the home. Merriam Webster describes a housewife as a married woman who is in charge of her household...
. He had six sisters and two brothers – Henryk and Franciszek, who also were footballers; Henryk played for Włókniarz Starogard Gdański, while Franciszek was a Starogardzki KS player.

Deyna began playing youth football in 1958 with the local Włókniarz Starogard Gdański. In 1966 he made one appearance for ŁKS Łódź (on 8 October in a 0–0 draw against Górnik Zabrze
Górnik Zabrze
Górnik Zabrze is a Polish football club from Zabrze. The club has won numerous championships, and was a dominant force in the 1960s and 1980s. For now Górnik has the most titles in Poland. The club plays in white or dark blue - red kit, and is based at the Ernest Pohl Stadium...
). But he was quickly snapped by Legia Warsaw. In communist Poland each team had its own "sponsor". Warsaw club was much more powerful as it was a military club. Moreover it was a favourite club of the authorities. Talented player was called-up into the army and in this way he had to play for Legia Warsaw. His career really got on well there, and yet in next season he was playing regularly.

In 1969 and 1970 his team won the Polish Championship. On April 24, 1968, he also played for the national team of Poland for the first time in a match against Turkey
Turkey
Turkey , known officially as the Republic of Turkey , is a Eurasian country located in Western Asia and in East Thrace in Southeastern Europe...
in Chorzów
Chorzów
Chorzów is a city in Silesia in southern Poland, near Katowice. Chorzów is one of the central districts of the Upper Silesian Metropolitan Union - a metropolis with a population of 2 million...
. Together with his team he won the gold medal in the 1972 Summer Olympics
1972 Summer Olympics
The 1972 Summer Olympics, officially known as the Games of the XX Olympiad, were an international multi-sport event held in Munich, West Germany, from August 26 to September 11, 1972....
in Munich
Munich
Munich The city's motto is "" . Before 2006, it was "Weltstadt mit Herz" . Its native name, , is derived from the Old High German Munichen, meaning "by the monks' place". The city's name derives from the monks of the Benedictine order who founded the city; hence the monk depicted on the city's coat...
, and the bronze in Football World Cup 1974, after a match against Brazil
Brazil
Brazil , officially the Federative Republic of Brazil , is the largest country in South America. It is the world's fifth largest country, both by geographical area and by population with over 192 million people...
. In 1972 he was also the Top Goalscorer of the Olympic Games, with a total of nine goals. In 1976 Summer Olympics
1976 Summer Olympics
The 1976 Summer Olympics, officially known as the Games of the XXI Olympiad, was an international multi-sport event celebrated in Montreal, Quebec, Canada, in 1976. Montreal was awarded the rights to the 1976 Games on May 12, 1970, at the 69th IOC Session in Amsterdam, over the bids of Moscow and...
his team yet again reached the finals and won the silver medal. Additionally, he was ranked third in the European Footballer of the Year
European Footballer of the Year
The "", literally translated as "the golden ball" and often referred to as the European Footballer of the Year award, was an annual association football award. It was presented to the player who had been considered to have performed the best over the previous calendar year...
for 1974, behind Johann Cruyff and Franz Beckenbauer
Franz Beckenbauer
Franz Anton Beckenbauer is a German football coach, manager, and former player, nicknamed Der Kaiser because of his elegant style, his leadership, his first name "Franz" , and his dominance on the football pitch...
respectively.

Deyna played for Poland on 97 (84 after the deduction of Olympic Football Tournament competition games) occasions, scoring 41 goals, and often captained the side. He had the ability to score from unusual positions, e.g. directly from a corner. Thanks to his skills, he was chosen several times the Football Player of the Year by Polish fans. In 1978 he captained Poland at the Football World Cup in Argentina
Argentina
Argentina , officially the Argentine Republic , is the second largest country in South America by land area, after Brazil. It is constituted as a federation of 23 provinces and an autonomous city, Buenos Aires...
, where the team reached the second phase.

Soon afterwards Deyna was transferred to English club Manchester City F.C.
Manchester City F.C.
Manchester City Football Club is an English Premier League football club based in Manchester. Founded in 1880 as St. Mark's , they became Ardwick Association Football Club in 1887 and Manchester City in 1894...
, making his debut in November 1978, and being one of the first wave of overseas players to play in the English league. His time in England was marred by a series of injuries, and he left in January 1981, shortly after a change in team manager, having made only 38 appearances in all competitions. However, he was regarded as an exceptionally gifted playmaker and became a cult figure with City fans. Deyna scored thirteen goals in his time with the club. Furthermore, his seven goals in the last eight games of 1978/79 season were crucial for Manchester City avoiding relegation.

He appeared in the 1981
1981 in film
-Events:*January 19 - Metro-Goldwyn-Mayer acquires beleaguered concurrent United Artists. UA was humiliated by the astronomical losses on the $40,000,000 movie Heaven's Gate, a major factor in the decision of owner Transamerica to sell it....
film Escape to Victory
Escape to Victory
Escape to Victory, known simply as Victory in North America, is a 1981 film about Allied prisoners of war who are interned in a German prison camp during World War II...
as Paul Wolcheck. In the same year, he emigrated to the USA, where he signed with the San Diego Sockers of the North American Soccer League
North American Soccer League
North American Soccer League was a professional soccer league with teams in the United States and Canada that operated from 1968 to 1984.-History:...
in January 1981. During the next seven years, he played four NASL outdoor seasons, one NASL indoor season and five MISL Major Indoor Soccer League seasons with the Sockers, winning five championships. The Sockers released him in June 1987. He was a 1983 NASL Second Team All Star. He died in a car accident in San Diego, California
San Diego, California
San Diego is the eighth-largest city in the United States and second-largest city in California. The city is located on the coast of the Pacific Ocean in Southern California, immediately adjacent to the Mexican border. The birthplace of California, San Diego is known for its mild year-round...
, aged 41.
In 1994 he was chosen by the Polish Football Association (PZPN) and the readers of all Polish sports-related newspapers as the Polish Football Player of All Time. His number 10 is retired by Legia Warsaw.