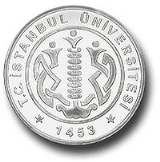 Encyclopedia
Istanbul University is a Turkish university located in Istanbul
Istanbul
Istanbul , historically known as Byzantium and Constantinople , is the largest city of Turkey. Istanbul metropolitan province had 13.26 million people living in it as of December, 2010, which is 18% of Turkey's population and the 3rd largest metropolitan area in Europe after London and...
. The main campus is adjacent to Beyazıt Square.

A madrasa, a religious school, was established sometime in the 15th century after the Ottoman conquest of Constantinople
Fall of Constantinople
The Fall of Constantinople was the capture of the capital of the Byzantine Empire, which occurred after a siege by the Ottoman Empire, under the command of Ottoman Sultan Mehmed II, against the defending army commanded by Byzantine Emperor Constantine XI...
. An institution of higher education
Higher education
Higher, post-secondary, tertiary, or third level education refers to the stage of learning that occurs at universities, academies, colleges, seminaries, and institutes of technology...
named the Darülfünun-i Osmani ('House of Sciences') was created in 1863, but suppressed in 1871. In 1874 the Imperial University (Darülfünun-i Sultani) started to give lectures in law
Law
Law is a system of rules and guidelines which are enforced through social institutions to govern behavior, wherever possible. It shapes politics, economics and society in numerous ways and serves as a social mediator of relations between people. Contract law regulates everything from buying a bus...
in French
French language
French is a Romance language spoken as a first language in France, the Romandy region in Switzerland, Wallonia and Brussels in Belgium, Monaco, the regions of Quebec and Acadia in Canada, and by various communities elsewhere. Second-language speakers of French are distributed throughout many parts...
, but was closed in 1881.

The Imperial University, now known as Darülfünun-i Shahane was refounded in 1900, with the departments of theology, arts, mathematics, science and philology. In 1924, the faculties
Faculty (university)
A faculty is a division within a university comprising one subject area, or a number of related subject areas...
of law, medicine, arts and sciences were established in Istanbul University (Istanbul Darülfünunu), as the university was now called. Islamic theology was added in 1925, but in 1933 the university was reorganized without the latter.

The first modern Applied Physics courses were given at the Darülfünûn on 31 December 1863, which marked the beginning of a new period, and on 20 February 1870, the school was renamed as the Darülfünûn-u Osmanî ('Ottoman House of Multiple Sciences') and reorganized to meet the needs of modern sciences and technologies. Starting from 1874, some classes of Literature, Law and Applied Sciences were given at the building of Galatasaray High School, which continued regularly until 1881. On 1 September 1900, the school was renamed and reorganized as the Darülfünûn-u Şahane ('Imperial House of Multiple Sciences') with courses on Mathematics, Literature and Theology. On 20 April 1912, the school was renamed as the İstanbul Darülfünûnu ('Istanbul House of Multiple Sciences') while the number of courses were increased and the curricula were modernized with the establishment of the Schools of Medicine, Law, Applied Sciences (Physics, Chemistry, Mathematics), Literature and Theology.

The university has seventeen faculties on five campuses, the main campus being on Beyazıt Square in Istanbul, which was known as the Forum Tauri in the Roman period. It has a teaching staff of 2,000 professors and associates and 4,000 assistants and younger staff. More than 60,000 undergraduate and 8,000 postgraduate students follow the courses offered by Istanbul University every year. The main campus with its landmark gate used to be the Ottoman ministry of war. Located on the grounds is the Beyazıt Tower
Beyazit Tower
Beyazıt Tower, also named Seraskier Tower, from the name of the Ottoman ministry of War, is an 85 metre tall fire-watch tower located in the courtyard of Istanbul University's main campus on Beyazıt Square in Istanbul, Turkey, on top of one of the "seven hills" which Constantine the Great had built...
, a 85 m (279 ft) tall fire-watch tower. The grounds before that was the location of the Eski Palace (Old Palace). Some Roman and Byzantine ruins are still visible on the grounds.

The main gate was depicted on the reverse
Obverse and reverse
Obverse and its opposite, reverse, refer to the two flat faces of coins and some other two-sided objects, including paper money, flags , seals, medals, drawings, old master prints and other works of art, and printed fabrics. In this usage, obverse means the front face of the object and reverse...
of the Turkish 500 lira
Turkish lira
The Turkish lira is the currency of Turkey and the de facto independent state of the Turkish Republic of Northern Cyprus. The lira is subdivided into 100 kuruş...
banknotes of 1971-1984. 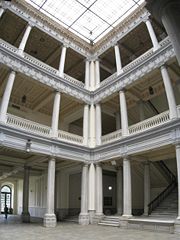 In 2010, University Ranking by Academic Performance (URAP) ranked Istanbul University 415th in the world and second university in Turkey.

Turkish Presidents:
Foreign Presidents
President
A president is a leader of an organization, company, trade union, university, or country.Etymologically, a president is one who presides, who sits in leadership...
:
Turkish Prime Ministers:
Foreign Prime Ministers
Prime minister
A prime minister is the most senior minister of cabinet in the executive branch of government in a parliamentary system. In many systems, the prime minister selects and may dismiss other members of the cabinet, and allocates posts to members within the government. In most systems, the prime...
:
Turkish Ministers
Minister (government)
A minister is a politician who holds significant public office in a national or regional government. Senior ministers are members of the cabinet....
:
Columnists:
Scientists:
Writers:
Poets:
Musicians:
Other: