Encyclopedia
Henning Larsen Architects is an international architecture firm based in Copenhagen
Copenhagen
Copenhagen is the capital and largest city of Denmark, with an urban population of 1,199,224 and a metropolitan population of 1,930,260 . With the completion of the transnational Øresund Bridge in 2000, Copenhagen has become the centre of the increasingly integrating Øresund Region...
, Denmark
Denmark
Denmark is a Scandinavian country in Northern Europe. The countries of Denmark and Greenland, as well as the Faroe Islands, constitute the Kingdom of Denmark . It is the southernmost of the Nordic countries, southwest of Sweden and south of Norway, and bordered to the south by Germany. Denmark...
. Founded in 1959 by noted Danish architect and namesake Henning Larsen
Henning Larsen
Henning Larsen is a Danish architect.He is internationally known for the Ministry of Foreign Affairs building in Riyadhand the Copenhagen Opera House...
, it has around 150 employees. In 2008 the company worked on projects in 16 countries.

Current projects include a new Headquarter for Der Spiegel
Der Spiegel
Der Spiegel is a German weekly news magazine published in Hamburg. It is one of Europe's largest publications of its kind, with a weekly circulation of more than one million.-Overview:...
on the harbourfront in Hamburg
Hamburg
-History:The first historic name for the city was, according to Claudius Ptolemy's reports, Treva.But the city takes its modern name, Hamburg, from the first permanent building on the site, a castle whose construction was ordered by the Emperor Charlemagne in AD 808...
, Germany
Germany
Germany , officially the Federal Republic of Germany , is a federal parliamentary republic in Europe. The country consists of 16 states while the capital and largest city is Berlin. Germany covers an area of 357,021 km2 and has a largely temperate seasonal climate...
, a 1.6 mill m² masterplan for the King Abdullah Financial District in Riyadh
Riyadh
Riyadh is the capital and largest city of Saudi Arabia. It is also the capital of Riyadh Province, and belongs to the historical regions of Najd and Al-Yamama. It is situated in the center of the Arabian Peninsula on a large plateau, and is home to 5,254,560 people, and the urban center of a...
, Saudi Arabia
Saudi Arabia
The Kingdom of Saudi Arabia , commonly known in British English as Saudi Arabia and in Arabic as as-Sa‘ūdiyyah , is the largest state in Western Asia by land area, constituting the bulk of the Arabian Peninsula, and the second-largest in the Arab World...
, and a music and conference centre for the Spanish
Spain
Spain , officially the Kingdom of Spain languages]] under the European Charter for Regional or Minority Languages. In each of these, Spain's official name is as follows:;;;;;;), is a country and member state of the European Union located in southwestern Europe on the Iberian Peninsula...
island Lanzarote
Lanzarote
Lanzarote , a Spanish island, is the easternmost of the autonomous Canary Islands, in the Atlantic Ocean, approximately 125 km off the coast of Africa and 1,000 km from the Iberian Peninsula. Covering 845.9 km2, it stands as the fourth largest of the islands...
.

After having worked both for Arne Jacobsen
Arne Jacobsen
Arne Emil Jacobsen, usually known as Arne Jacobsen, was a Danish architect and designer. He is remembered for contributing so much to architectural Functionalism as well as for the worldwide success he enjoyed with simple but effective chair designs.-Early life and education:Arne Jacobsen was born...
(1952–53) and Jørn Utzon
Jørn Utzon
Jørn Oberg Utzon, , AC was a Danish architect, most notable for designing the Sydney Opera House in Australia. When it was declared a World Heritage Site on 28 June 2007, Utzon became only the second person to have received such recognition for one of his works during his lifetime...
(1958), Henning Larsen founded Henning Larsens Tegnestue in 1959. With firm roots in Scandinavian design tradition, the office grew to one of the largest in Denmark. The first major project outside Scandinavia was the Ministry of Foreign Affairs in Riyadh, establishing the firm's international reputation. 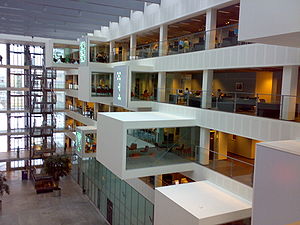