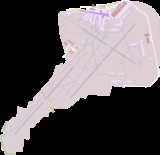 Encyclopedia
Copenhagen Airport is the main international airport
International airport
An international airport is any airport that can accommodate flights from other countries and are typically equipped with customs and immigration facilities to handle these flights to and from other countries...
serving Copenhagen
Copenhagen
Copenhagen is the capital and largest city of Denmark, with an urban population of 1,199,224 and a metropolitan population of 1,930,260 . With the completion of the transnational Øresund Bridge in 2000, Copenhagen has become the centre of the increasingly integrating Øresund Region...
, Denmark
Denmark
Denmark is a Scandinavian country in Northern Europe. The countries of Denmark and Greenland, as well as the Faroe Islands, constitute the Kingdom of Denmark . It is the southernmost of the Nordic countries, southwest of Sweden and south of Norway, and bordered to the south by Germany. Denmark...
and the Oresund Region
Oresund Region
The Øresund or Öresund Region is a transnational region in northern Europe, centred on the cities of Copenhagen and Malmö. Located by the shores of the Øresund strait and connected by the Oresund Bridge, the Capital Region of Denmark and Region Zealand constitute the Danish side, while Skåne...
. It is located on the island of Amager
Amager
Amager is a Danish island in the Øresund. The Danish capital, Copenhagen, is partly situated on Amager, which is connected to the much larger island of Zealand by five bridges.-History:...
, 8 kilometres (5 mi) south of Copenhagen city centre, and 24 kilometres (14.9 mi) west of Malmö
Malmö
Malmö , in the southernmost province of Scania, is the third most populous city in Sweden, after Stockholm and Gothenburg.Malmö is the seat of Malmö Municipality and the capital of Skåne County...
city centre on the other side of the Oresund Bridge
Oresund Bridge
The Øresund or Öresund Bridge is a combined twin-track railway and dual carriageway bridge-tunnel across the Øresund strait.The bridge connects Sweden and Denmark, and it is the longest road and rail bridge in Europe. The Øresund Bridge also connects two major Metropolitan Areas: those of the...
. The airport lies mainly in the municipality of Tårnby
Tårnby
Tårnby Kommune is a municipality bordering Copenhagen on the island of Amager just south of Zealand in eastern Denmark. The municipality includes the islands of Saltholm and Peberholm, and covers an area of 65 km². It has a total population of 40,214...
, with a small portion in neighboring Dragør. It is the largest airport in the Nordic countries, and one of the oldest international airports in Europe.

The airport is the main hub
Airline hub
An airline hub is an airport that an airline uses as a transfer point to get passengers to their intended destination. It is part of a hub and spoke model, where travelers moving between airports not served by direct flights change planes en route to their destinations...
out of three used by Scandinavian Airlines and is also a hub for Cimber Sterling
Cimber Sterling
Cimber Sterling A/S, still known as Cimber Air and styled as Cimber Sterling, is a Danish airline based in Sønderborg, Sønderborg Municipality, Denmark, operating scheduled domestic and international services in co-operation with Scandinavian Airlines and Lufthansa...
, Thomas Cook Airlines Scandinavia and Norwegian Air Shuttle
Norwegian Air Shuttle
Norwegian Air Shuttle ASA , trading as Norwegian, is the second-largest airline in Scandinavia. In 2010, it transported 13.0 million people. As of October 2011, Norwegian operates a total fleet of 62 aircraft; 17 Boeing 737-300s and 45 Boeing 737-800s...
. Copenhagen Airport handles 60 scheduled airlines and serves nearly 60,000 passengers per day; 21.5 million passengers passed through the facility in 2010, making it the busiest airport in the Nordic countries, with a maximum capacity of 83 loadings/hour and with room for 108 airplanes. Unlike other Scandinavian airports, a considerable share of the airport's passengers are international. The domestic part of the annual passengers is lower than 10%. The airport is owned by Københavns Lufthavne
Københavns Lufthavne
Københavns Lufthavne is a public limited company that operates the two airports in Copenhagen, Denmark, Copenhagen Airport and Roskilde Airport. In addition, the company holds a 49% stake in Newcastle International Airport and 10% of Aeropuertos del Sureste that operate nine airports in Mexico.The...
, which also operates Roskilde Airport
Roskilde Airport
Roskilde Airport , officially known as Copenhagen Airport, Roskilde , is located 4 nautical miles southeast of Roskilde near the town Tune. It was opened in 1973 as the first of three planned relief airports around Copenhagen. These plans were shelved shortly after, and the two other relief...
. The airport employs 1700 staff (excluding shops, restaurants etc.).

Copenhagen Airport was originally called Kastrup Airport, since it is located in the small town of Kastrup
Kastrup
Kastrup is a suburb of Copenhagen, on the east coast of Amager in the Tårnby Municipality.Kastrup is best known as the site of Copenhagen Airport. In Danish, the airport is often called Kastrup Lufthavn or Københavns Lufthavn, Kastrup .Scandinavian Airlines System has its Denmark offices in Kastrup...
, now a part of the Tårnby
Tårnby
Tårnby Kommune is a municipality bordering Copenhagen on the island of Amager just south of Zealand in eastern Denmark. The municipality includes the islands of Saltholm and Peberholm, and covers an area of 65 km². It has a total population of 40,214...
municipality. The formal name of the airport is still Copenhagen Airport, Kastrup, to distinguish it from Roskilde Airport
Roskilde Airport
Roskilde Airport , officially known as Copenhagen Airport, Roskilde , is located 4 nautical miles southeast of Roskilde near the town Tune. It was opened in 1973 as the first of three planned relief airports around Copenhagen. These plans were shelved shortly after, and the two other relief...
, which was previously called Copenhagen Airport, Roskilde. Locally many people still call the airport just Kastrup.

Copenhagen Airport has four terminals. Terminal 1 is used for all domestic flights. Terminals 2 and 3 handle international flights (both Schengen and non-Schengen) and share a common airside passenger concourse as well as the arrivals section - which houses customs and baggage claim and is physically located in Terminal 3. The newest terminal, CPH Go, dedicated to low-cost carriers opened the 31st of October 2010. So far EasyJet is the only airline operating from this terminal. An all new Terminal 4 is currently being planned. 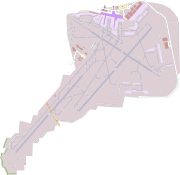 3 weekly flights from Copenhagen to Phuket nonstop. No direct flight in the other way - from Phuket to Copenhagen.

Although some of these flights make an intermediate stop en route to their listed destination, they do not have rights to carry traffic solely between Copenhagen and the intermediate city.


Additionally, several airlines operate charter flights out of the airport, including:

SAS traffic office resides at the airport, and so do Cimber Sterling
Cimber Sterling
Cimber Sterling A/S, still known as Cimber Air and styled as Cimber Sterling, is a Danish airline based in Sønderborg, Sønderborg Municipality, Denmark, operating scheduled domestic and international services in co-operation with Scandinavian Airlines and Lufthansa...
's.
Thomas Cook Airlines
Thomas Cook Airlines
Thomas Cook Airlines is a British charter airline based in Manchester, England. It serves main holiday resorts worldwide, from its main bases at Manchester and Gatwick.The airline also operates services from nine other bases in the United Kingdom....
has both its head- and traffic office here as well as a flight simulator center, OOA
OOA
OOA may mean:*Object-oriented analysis*Open-ocean aquaculture*Old Order Amish*Ohio Optometric Association*The Legend of Zelda: Oracle of Ages, video game...
. All these reside at Copenhagen Airport South and in Dragør
Dragør
Dragør Kommune is a municipality in Copenhagen County on the southern coast of the island of Amager just east of Zealand in eastern Denmark. The municipality covers an area of 18 km², and has a total population of 13,411...
, Dragør Municipality together with a VIP-terminal.
The VIP-terminal building is actually the very first terminal building, from the 1920s. It was moved about 2 km during the 1990s.

At four occasions the American president in office has landed at the airport.
Bill Clinton
Bill Clinton
William Jefferson "Bill" Clinton is an American politician who served as the 42nd President of the United States from 1993 to 2001. Inaugurated at age 46, he was the third-youngest president. He took office at the end of the Cold War, and was the first president of the baby boomer generation...
in 1998, George W Bush in 2005 and Barack Obama
Barack Obama
Barack Hussein Obama II is the 44th and current President of the United States. He is the first African American to hold the office. Obama previously served as a United States Senator from Illinois, from January 2005 until he resigned following his victory in the 2008 presidential election.Born in...
twice, both in October and December 2009. 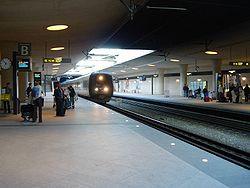 The airport can be accessed in various ways: