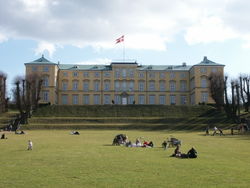 Frederiksberg was one of the three last Danish municipalities not belonging to a County
Counties of Denmark
Denmark was until December 31, 2006 divided into 15 counties , and 270 municipalities . On January 1, 2007, the counties were replaced by five Regions and the number of municipalities slashed to 98....
—the others being Copenhagen
Copenhagen
Copenhagen is the capital and largest city of Denmark, with an urban population of 1,199,224 and a metropolitan population of 1,930,260 . With the completion of the transnational Øresund Bridge in 2000, Copenhagen has become the centre of the increasingly integrating Øresund Region...
and Bornholm
Bornholm
Bornholm is a Danish island in the Baltic Sea located to the east of the rest of Denmark, the south of Sweden, and the north of Poland. The main industries on the island include fishing, arts and crafts like glass making and pottery using locally worked clay, and dairy farming. Tourism is...
. On 1 January 2007, the municipality lost its county privileges and became part of Region Hovedstaden
Region Hovedstaden
The Capital Region of Denmark is an administrative region of Denmark established on January 1, 2007 as part of the 2007 Danish Municipal Reform, which replaced the traditional counties with five larger regions. At the same time, smaller municipalities were merged into larger units, cutting the...
(i.e. the Copenhagen Capital Region).

Frederiksberg municipality was not merged with other municipalities as the result of nationwide Kommunalreformen ("The Municipal Reform" of 2007).

Frederiksberg Municipality is twinned
Town twinning
Twin towns and sister cities are two of many terms used to describe the cooperative agreements between towns, cities, and even counties in geographically and politically distinct areas to promote cultural and commercial ties.- Terminology :...
with: Tartu
Tartu
Tartu is the second largest city of Estonia. In contrast to Estonia's political and financial capital Tallinn, Tartu is often considered the intellectual and cultural hub, especially since it is home to Estonia's oldest and most renowned university. Situated 186 km southeast of Tallinn, the...
, Estonia
Estonia
Estonia , officially the Republic of Estonia , is a state in the Baltic region of Northern Europe. It is bordered to the north by the Gulf of Finland, to the west by the Baltic Sea, to the south by Latvia , and to the east by Lake Peipsi and the Russian Federation . Across the Baltic Sea lies...
Uppsala
Uppsala
- Economy :Today Uppsala is well established in medical research and recognized for its leading position in biotechnology.*Abbott Medical Optics *GE Healthcare*Pfizer *Phadia, an offshoot of Pharmacia*Fresenius*Q-Med...
, Uppsala län
Uppsala County
Uppsala County is a county or län on the eastern coast of Sweden. It borders the counties of Stockholm, Södermanland, Västmanland, Gävleborg, and the Baltic Sea.- Province :For History, Geography and Culture see: Uppland...
, Sweden
Sweden
Sweden , officially the Kingdom of Sweden , is a Nordic country on the Scandinavian Peninsula in Northern Europe. Sweden borders with Norway and Finland and is connected to Denmark by a bridge-tunnel across the Öresund....
Bærum
Bærum
is a municipality in Akershus county, Norway. The administrative centre of the municipality is the town of Sandvika. Bærum was established as a municipality on 1 January 1838. A suburb of Oslo, Bærum is located on the west coast of the city....
, Norway
Norway
Norway , officially the Kingdom of Norway, is a Nordic unitary constitutional monarchy whose territory comprises the western portion of the Scandinavian Peninsula, Jan Mayen, and the Arctic archipelago of Svalbard and Bouvet Island. Norway has a total area of and a population of about 4.9 million...
Hämeenlinna
Hämeenlinna
Hämeenlinna is a city and municipality of about inhabitants in the heart of the historical province of Häme in the south of Finland and is the birthplace of composer Jean Sibelius. Today, it belongs to the region of Tavastia Proper, and until 2010 it was the residence city for the Governor of the...
, Etelä-Suomi
Southern Finland
Southern Finland was a province of Finland from 1997 to 2010. It bordered the provinces of Western Finland and Eastern Finland. It also bordered the Gulf of Finland and Russia.- History :...
, Finland
Finland
Finland , officially the Republic of Finland, is a Nordic country situated in the Fennoscandian region of Northern Europe. It is bordered by Sweden in the west, Norway in the north and Russia in the east, while Estonia lies to its south across the Gulf of Finland.Around 5.4 million people reside...
Hafnarfjörður
Hafnarfjörður
Hafnarfjörður is a port town and municipality located on the south-west coast of Iceland, about 10 km south of Reykjavík....
, Iceland
Iceland
Iceland , described as the Republic of Iceland, is a Nordic and European island country in the North Atlantic Ocean, on the Mid-Atlantic Ridge. Iceland also refers to the main island of the country, which contains almost all the population and almost all the land area. The country has a population...
Cēsis
Cesis
Cēsis , is a town in Latvia located in the northern part of the Central Vidzeme Upland. Cēsis is on the Gauja River valley, and is built on a series of ridges above the river overlooking the woods below...
, Latvia
Latvia
Latvia , officially the Republic of Latvia , is a country in the Baltic region of Northern Europe. It is bordered to the north by Estonia , to the south by Lithuania , to the east by the Russian Federation , to the southeast by Belarus and shares maritime borders to the west with Sweden...