The tower was constructed between 1917 and 1921 as part of the Memorial Quadrangle
Memorial Quadrangle
The Memorial Quadrangle at Yale University, USA, was donated by Anna M. Harkness with Harkness Tower named in memory of her son, Charles Harkness, Yale Class of 1883. Commissioned from James Gamble Rogers to supply much-needed student housing, the Quadrangle now consists of Saybrook College and...
donated to Yale by Anna M. Harkness
Anna M. Harkness
Anna M. Richardson was an American philanthropist.She married Stephen Vanderburgh Harkness, a harnessmaker of Cleveland, in 1851. They were parents of Charles William Harkness and Edward Stephen Harkness. Harkness senior invested with John D. Rockefeller and became the second-largest shareholder...
in honor of her recently deceased son, Charles William Harkness, Yale class of 1883, and the second son of Stephen V. Harkness, an early investor in the company that became Standard Oil. It was designed by James Gamble Rogers
James Gamble Rogers
James Gamble Rogers was an American architect best known for his academic commissions at Yale University, Columbia University, Northwestern University, and elsewhere....
, who designed many of Yale's "Collegiate Gothic" structures. Rogers said his design for the tower was inspired by "Boston Stump," the 272 feet (82.9 m) tower of the parish church of St Botolph in Boston, England. The 15th-century Boston Stump is the tallest parish church tower in England
England
England is a country that is part of the United Kingdom. It shares land borders with Scotland to the north and Wales to the west; the Irish Sea is to the north west, the Celtic Sea to the south west, with the North Sea to the east and the English Channel to the south separating it from continental...
. Rogers also based some details on the 16th-century tower of St Giles church
St Giles' Church, Wrexham
St Giles' Church is the parish church of Wrexham, Wales. Its tower is traditionally one of the Seven Wonders of Wales, which are commemorated in an anonymously written rhyme:...
in Wrexham
Wrexham
Wrexham is a town in Wales. It is the administrative centre of the wider Wrexham County Borough, and the largest town in North Wales, located in the east of the region. It is situated between the Welsh mountains and the lower Dee Valley close to the border with Cheshire, England...
, Wales
Wales
Wales is a country that is part of the United Kingdom and the island of Great Britain, bordered by England to its east and the Atlantic Ocean and Irish Sea to its west. It has a population of three million, and a total area of 20,779 km²...
, where Elihu Yale
Elihu Yale
Elihu Yale was a Welsh merchant and philanthropist, governor of the East India Company, and a benefactor of the Collegiate School of Connecticut, which in 1718 was named Yale College in his honour.- Life :...
is buried. 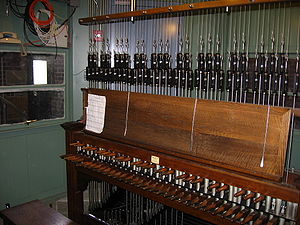 The tower contains the Yale Memorial Carillon
Yale Memorial Carillon
The Yale Memorial Carillon is a carillon of 54 bells in Harkness Tower at Yale University in New Haven, Connecticut....
, a 54-bell carillon
Carillon
A carillon is a musical instrument that is typically housed in a free-standing bell tower, or the belfry of a church or other municipal building. The instrument consists of at least 23 cast bronze, cup-shaped bells, which are played serially to play a melody, or sounded together to play a chord...
. It is a transposing instrument (the C bell sounds a concert B). Ten bells were installed in 1922; 44 were added in 1966. The instrument is played by members of a student-run group set up for the purpose, the Yale Guild of Carillonneurs, and selected guest carillonneurs. During the school year, the instrument is played twice per day, a half-hour session at 12:30 p.m. and a one-hour session at 5:00 p.m.; in summer it is played only in the evening, with a Summer Series of regularly scheduled concerts on Fridays. (Some residents of Branford College
Branford College
Branford College is the oldest of the 12 residential colleges at Yale University.-The Founding of Branford:Branford College was founded in 1933 by partitioning the Memorial Quadrangle into two parts: Saybrook and Branford...
and Saybrook College
Saybrook College
Saybrook College is one of the 12 residential colleges at Yale University. It was founded in 1933 by partitioning the Memorial Quadrangle into two parts: Saybrook and Branford....
, of which the tower forms a part of the periphery, have been known to call the daily performances "death by bells.")

Harkness Tower is 216 feet (66 m) tall, one foot for each year since Yale's founding at the time it was built. From a square base, it rises in stages to a double stone crown on an octagonal base, and at the top there are stone pinnacles. It was built of separate stone blocks in the authentic manner. Yale tour guides like to perpetuate the myth that the Tower was once the tallest free-standing stone structure in the world, but needed to be reinforced because its eccentric architect poured acid down the walls to make the tower look older. In reality, the Washington Monument
Washington Monument
The Washington Monument is an obelisk near the west end of the National Mall in Washington, D.C., built to commemorate the first U.S. president, General George Washington...
has been the tallest free-standing stone structure in the United States since it was completed, long before Harkness Tower was built. The Tower was reinforced with steel in 1966 to bear the additional bells that brought the total bell weight to 43 tons.

Midway to the top, four openwork copper clockfaces tell the hours. The bells of the carillon are located behind the clockfaces, fixed to a frame made of steel I-beams. The playing console of the carillon is at the level of the balconies immediately below the clock faces. Lower levels of the tower house a water tank (no longer used), two practice carillons, the old chimes playing console, office space for the Yale University Guild of Carillonneurs, and a memorial chapel.

The tower's image was adopted by the Yale Herald, a weekly student newspaper, for its masthead.

Between September 2009 and May 2010, the Tower was being renovated. It was shrouded with blue construction netting and carillon playing had been temporarily suspended.

At 7.00pm on May 11, 2010, carillon playing resumed. Harkness' sound can be heard throughout Yale once more at designated times.