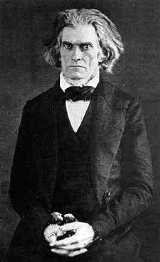 Overview
John Caldwell Calhoun was a leading politician and political theorist from South Carolina
South Carolina
South Carolina is a state in the Deep South of the United States that borders Georgia to the south, North Carolina to the north, and the Atlantic Ocean to the east. Originally part of the Province of Carolina, the Province of South Carolina was one of the 13 colonies that declared independence...
during the first half of the 19th century. Calhoun eloquently spoke out on every issue of his day, but often changed positions. Calhoun began his political career as a nationalist, modernizer, and proponent of a strong national government and protective tariffs
Protectionism
Protectionism is the economic policy of restraining trade between states through methods such as tariffs on imported goods, restrictive quotas, and a variety of other government regulations designed to allow "fair competition" between imports and goods and services produced domestically.This...
. After 1840 he switched to states' rights
States' rights
States' rights in U.S. politics refers to political powers reserved for the U.S. state governments rather than the federal government. It is often considered a loaded term because of its use in opposition to federally mandated racial desegregation...
, limited government
Limited government
Limited government is a government which anything more than minimal governmental intervention in personal liberties and the economy is generally disallowed by law, usually in a written constitution. It is written in the United States Constitution in Article 1, Section 8...
, nullification
Nullification (U.S. Constitution)
Nullification is a legal theory that a State has the right to nullify, or invalidate, any federal law which that state has deemed unconstitutional...
and free trade
Free trade
Under a free trade policy, prices emerge from supply and demand, and are the sole determinant of resource allocation. 'Free' trade differs from other forms of trade policy where the allocation of goods and services among trading countries are determined by price strategies that may differ from...
. He is best known for his intense and original defense of slavery as something positive, for his inventing the theory of minority rights in a democracy, and for pointing the South toward secession from the Union
Secession in the United States
Secession in the United States can refer to secession of a state from the United States, secession of part of a state from that state to form a new state, or secession of an area from a city or county....
.

Devoted to the principle of liberty (though not for slaves) and fearful of corruption, Calhoun built his reputation as a political theorist by his redefinition of republicanism
Republicanism in the United States
Republicanism is the political value system that has been a major part of American civic thought since the American Revolution. It stresses liberty and inalienable rights as central values, makes the people as a whole sovereign, supports activist government to promote the common good, rejects...
to include approval of slavery and minority rights—with the white South the minority in question.

Why was his nick name red fox
More

Protection and patriotism are reciprocal.

The very essence of a free government consists in considering offices as public trusts, bestowed for the good of the country, and not for the benefit of an individual or a party.

A power has risen up in the government greater than the people themselves, consisting of many and various and powerful interests, combined into one mass, and held together by the cohesive power of the vast surplus in the banks.

The surrender of life is nothing to sinking down into acknowledgment of inferiority.

It is harder to preserve than to obtain liberty.