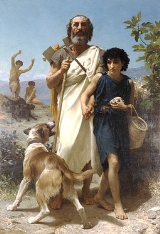 Overview
In the Western classical
Classics
Classics is the branch of the Humanities comprising the languages, literature, philosophy, history, art, archaeology and other culture of the ancient Mediterranean world ; especially Ancient Greece and Ancient Rome during Classical Antiquity Classics (sometimes encompassing Classical Studies or...
tradition Homer (ˈhoʊmər; Ancient Greek
Ancient Greek
Ancient Greek is the stage of the Greek language in the periods spanning the times c. 9th–6th centuries BC, , c. 5th–4th centuries BC , and the c. 3rd century BC – 6th century AD of ancient Greece and the ancient world; being predated in the 2nd millennium BC by Mycenaean Greek...
: , Hómēros), is the author of the Iliad
Iliad
The Iliad is an epic poem in dactylic hexameters, traditionally attributed to Homer. Set during the Trojan War, the ten-year siege of the city of Troy by a coalition of Greek states, it tells of the battles and events during the weeks of a quarrel between King Agamemnon and the warrior Achilles...
and the Odyssey
Odyssey
The Odyssey is one of two major ancient Greek epic poems attributed to Homer. It is, in part, a sequel to the Iliad, the other work ascribed to Homer. The poem is fundamental to the modern Western canon, and is the second—the Iliad being the first—extant work of Western literature...
, and is revered as the greatest ancient Greek epic
Epic poetry
An epic is a lengthy narrative poem, ordinarily concerning a serious subject containing details of heroic deeds and events significant to a culture or nation. Oral poetry may qualify as an epic, and Albert Lord and Milman Parry have argued that classical epics were fundamentally an oral poetic form...
poet
Poet
A poet is a person who writes poetry. A poet's work can be literal, meaning that his work is derived from a specific event, or metaphorical, meaning that his work can take on many meanings and forms. Poets have existed since antiquity, in nearly all languages, and have produced works that vary...
. These epics lie at the beginning of the Western canon
Western canon
The term Western canon denotes a canon of books and, more broadly, music and art that have been the most important and influential in shaping Western culture. As such, it includes the "greatest works of artistic merit." Such a canon is important to the theory of educational perennialism and the...
of literature, and have had an enormous influence on the history of literature
Literature
Literature is the art of written works, and is not bound to published sources...
.

When he lived is controversial. Herodotus
Herodotus
Herodotus was an ancient Greek historian who was born in Halicarnassus, Caria and lived in the 5th century BC . He has been called the "Father of History", and was the first historian known to collect his materials systematically, test their accuracy to a certain extent and arrange them in a...
estimates that Homer lived 400 years before Herodotus' own time, which would place him at around 850 BC
850s BC
-Events and trends:*859 BC—Assurnasirpal II dies.*859 BC—Shalmaneser attacks Syria and Palestine.*858 BC—Aramu becomes king of Urartu.*858 BC—Shalmaneser III succeeds Assurnasirpal II as king of Assyria....
; while other ancient sources claim that he lived much nearer to the supposed time of the Trojan War
Trojan War
In Greek mythology, the Trojan War was waged against the city of Troy by the Achaeans after Paris of Troy took Helen from her husband Menelaus, the king of Sparta. The war is among the most important events in Greek mythology and was narrated in many works of Greek literature, including the Iliad...
, in the early 12th century BC.

For modern scholars "the date of Homer" refers not to an individual, but to the period when the epics were created.

I've heard rumors of homer actually being a woman can anyone shine some light on this subject.
More

What are some elements of Homeric style?

Was there really a homer

What is known of Homer's life?

Did Homer really write The Illiad and The Odyssey?
More

The will of Zeus was accomplished.

Then looking at him darkly resourceful Odysseus spoke to him: "What is this word that broke through the fence of your teeth, Atreides?"

As is the generation of leaves, so is that of humanity. The wind scatters the leaves on the ground, but the live timber burgeons with leaves again in the season of spring returning. So one generation of men will grow while another dies.

So they spoke, and both springing down from behind their horses gripped each other's hands and exchanged the promise of friendship; but Zeus the son of Kronos stole away the wits of Glaukos who exchanged with Diomedes the son of Tydeus armour of gold for bronze, for nine oxen's worth the worth of a hundred.

Victory passes back and forth between men.

Man, supposing you and I, escaping this battle, would be able to live on forever, ageless, immortal, so neither would I myself go on fighting in the foremost, nor would I urge you into the fighting where men win glory. But now, seeing that the spirits of death stand close about us in their thousands, no man can turn aside or escape them, let us go on and win glory for ourselves, or yield it to others.

Among all creatures that breathe on earth and crawl on it there is not anywhere a thing more dismal than man is.

I have gone through what no other mortal on earth has gone through; I put my lips to the hands of the man who has killed my children.

And you, old sir, we are told you prospered once.

These things surely lie on the knees of the gods.