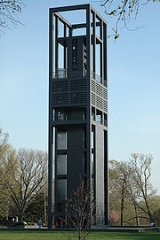 A carillon (ˈkærɨlɒn, ˈkærɨljɒn, or kəˈrɪljən; kaʁijɔ̃) is a musical instrument
Musical instrument
A musical instrument is a device created or adapted for the purpose of making musical sounds. In principle, any object that produces sound can serve as a musical instrument—it is through purpose that the object becomes a musical instrument. The history of musical instruments dates back to the...
that is typically housed in a free-standing bell tower
Bell tower
A bell tower is a tower which contains one or more bells, or which is designed to hold bells, even if it has none. In the European tradition, such a tower most commonly serves as part of a church and contains church bells. When attached to a city hall or other civic building, especially in...
, or the belfry of a church or other municipal building. The instrument consists of at least 23 cast bronze, cup-shaped bell
Bell (instrument)
A bell is a simple sound-making device. The bell is a percussion instrument and an idiophone. Its form is usually a hollow, cup-shaped object, which resonates upon being struck...
s, which are played serially to play a melody, or sounded together to play a chord. A carillon is played by striking a keyboard
Musical keyboard
A musical keyboard is the set of adjacent depressible levers or keys on a musical instrument, particularly the piano. Keyboards typically contain keys for playing the twelve notes of the Western musical scale, with a combination of larger, longer keys and smaller, shorter keys that repeats at the...
- the keys of which are sometimes called batons - with the fists, and by pressing the keys of a pedal keyboard with the feet. The keys mechanically activate levers and wires that connect to metal clappers that strike the bells, allowing the performer, or carillonneur, to vary the intensity of the note according to the force applied to the key.

The carillon is the heaviest of all extant musical instruments; the total weight of bells alone can be 100 tons in the largest instruments.

The greatest concentration of carillons is still found in the Netherlands, Belgium, and Northern France, where they were symbols of civic pride and status. Some of the most spectacular are now protected by UNESCO
UNESCO
The United Nations Educational, Scientific and Cultural Organization is a specialized agency of the United Nations...
as part of the world heritage site the Belfries of Belgium and France
Belfries of Belgium and France
The Belfries of Belgium and France is a group of 56 historical buildings designated by UNESCO as World Heritage Site, in recognition of an architectural manifestation of emerging civic independence in historic Flanders and neighbouring regions from feudal and religious influences, leading to a...
.

In medieval times, bells were first used as a way of notifying people of fires, storms, wars and other events. The great bell Rowland announced births, deaths, fires, and military attacks. A ringing of bells rung from the lowest note to the highest note indicated that an attack had taken place. The use of bells in a musical fashion originated in the 14th century in the Low Countries
Low Countries
The Low Countries are the historical lands around the low-lying delta of the Rhine, Scheldt, and Meuse rivers, including the modern countries of Belgium, the Netherlands, Luxembourg and parts of northern France and western Germany....
.

In the 17th century, François and Pieter Hemony developed the art of bell-founding
Bellfounding
Bellfounding is the casting of bells in a foundry for use in churches, clocks, and public buildings. A practitioner of the craft is called a bellmaker or bellfounder. The process in Europe dates to the 4th or 5th century. In early times, when a town produced a bell it was a momentous occasion in...
, designing, and tuning, which they passed on to Antwerp bellfounder Melchior de Haze. In the 18th century, several members of the Van den Gheyn bellfounders dynasty also mastered the skill of bell tuning, such as Andreas Joseph Van den Gheyn. Unfortunately his techniques also died with him. It was not until the 19th century in England under the John Taylor Bellfounders
John Taylor Bellfounders
John Taylor & Co, formerly trading as Taylors, Eayre & Smith Ltd and John Taylor Bellfounders Ltd, and commonly known as Taylor's Bell Foundry or simply Taylor's, is the world's largest working bell foundry, located in Loughborough in the United Kingdom.The company manufactures bells for use in...
at Loughborough, England, that bell tuning was re-invented.

The greatest concentration of carillons is still found in the Netherlands, Belgium, and in the north of France, where they were mounted in the grand towers of rich cities as tokens of civic pride and status. Carillons were usually housed in church towers, belfries, or in municipal buildings. In Germany
Germany
Germany , officially the Federal Republic of Germany , is a federal parliamentary republic in Europe. The country consists of 16 states while the capital and largest city is Berlin. Germany covers an area of 357,021 km2 and has a largely temperate seasonal climate...
, a carillon is also called a Glockenspiel
Glockenspiel
A glockenspiel is a percussion instrument composed of a set of tuned keys arranged in the fashion of the keyboard of a piano. In this way, it is similar to the xylophone; however, the xylophone's bars are made of wood, while the glockenspiel's are metal plates or tubes, and making it a metallophone...
.

Since each separate note is produced by an individual bell, a carillon's musical range
Range (music)
In music, the range of a musical instrument is the distance from the lowest to the highest pitch it can play. For a singing voice, the equivalent is vocal range...
is determined by the number of bells it has. Different names are assigned to instruments based on the number of bells they comprise:
The Riverside Carillon in New York City has (or did have—there may be other instruments with larger bourdon
Bourdon (bell)
The bourdon is the heaviest of the bells that belong to a musical instrument, especially a chime or a carillon, and produces its lowest tone....
s) the largest tuned bell in the world, which sounds the C two octaves below middle C on the piano.


The carillonneur or carillonist is the title of the musician
Musician
A musician is an artist who plays a musical instrument. It may or may not be the person's profession. Musicians can be classified by their roles in performing music and writing music.Also....* A person who makes music a profession....
who plays the carillon. The carillonneur/carillonist usually sits in a cabin beneath the bells and presses down, with a loosely closed fist, on a series of baton-like keys arranged in the same pattern as a piano keyboard. The batons are almost never played with the fingers as one does a piano, though this is sometimes used as a special carillon playing technique. The keys activate levers and wires that connect directly to the bells' clappers; thus, as with a piano, the carillonneur can vary the intensity of the note according to the force applied to the key. In addition to the manual keys, the heavier bells are also played with a pedal keyboard. These notes can either be played with the hands or the feet.


There is a major 10th, 12th, and 15th which are not typically individually tuned, but are usually present anyway. They all combine to create a "resultant" pitch, which is in unison with prime on a well-tuned bell. Properly tuned bells emphasize the fundamental frequency of the bell.
There is no standard pitch range for the carillon. In general, a concert carillon will have a minimum of forty-eight bells. The range of any given instrument usually depends on funds available for the fabrication and installation of the instrument: more money allows more bells to be cast, especially the larger, more costly ones. Older carillons can be transposing instruments, generally transposing upward. Most modern instruments sound at concert pitch. A carillon clavier
Musical keyboard
A musical keyboard is the set of adjacent depressible levers or keys on a musical instrument, particularly the piano. Keyboards typically contain keys for playing the twelve notes of the Western musical scale, with a combination of larger, longer keys and smaller, shorter keys that repeats at the...
has both a manual and a pedal keyboard.

Carillon music is typically written on two staves. Notes written in the bass clef are generally played by the feet. Notes written in the treble clef are played with the hands. Pedals range from the lowest note (the bourdon) and may continue up to two and half octaves. In the North American Standard keyboard, all notes can be played on the manual.

Because of the acoustic peculiarities of a carillon bell (the prominence of the minor third, and the lack of damping of sound), music written for other instruments needs to be arranged specifically for the carillon.

The combination of carillon and other instruments, while possible, is generally not a happy marriage. The carillon is generally far too loud to perform with most other concert instruments. The great exceptions to this are some late twentieth- and early twenty-first century compositions involving electronic media and carillon. In these compositions, sound amplification is able to match the extreme dynamic range of the carillon and, in the case of sensitive composers, even the most delicate effects are possible.

Recording the carillon is notoriously difficult. The extreme amount of sound waves that are generated and the layout of a carillon present problems not found in normal recording situations. PZM microphones
PZM (microphone)
PZM is an acronym for Pressure Zone Microphone; it generally refers to a "boundary microphone" in which a small omnidirectional condenser mic capsule faces a boundary a few thousandths of an inch away. PZM is a trademark of Crown International....
can handle the enormous waves of sound, but it isn't possible to decide on the location of the microphones without experimentation. 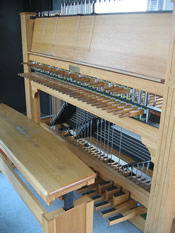 Overview of highest concentrations of carillons (as defined by the World Carillon Federation) (data September 2006):

Another international carillon school, the Scandinavian Carillon School in Løgumkloster, Denmark, was established back in 1979. It serves mainly Scandinavians, but does also cooperate with other carillon schools on a University level with student exchanging.

A number of universities and undergraduate institutions also make use of carillons as part of their tradition. SUNY Geneseo’s carillon sounds traditional clock bell tones every hour, along with various songs, everything from classical to pop, being played throughout the day. Princeton University
Princeton University
Princeton University is a private research university located in Princeton, New Jersey, United States. The school is one of the eight universities of the Ivy League, and is one of the nine Colonial Colleges founded before the American Revolution....
houses a carillon of 67 bells which can be heard every Sunday afternoon and most Wednesday evenings with performances from Robin Austin, his students, and guest artists. Smith College in Northampton Massachusetts completed its carillon of 48 bells in 2009, ninety years after the first bells were hung in 1919.