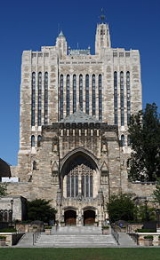 Sterling Memorial Library
Sterling Memorial Library
Sterling Memorial Library is the largest library at Yale University, containing over 4 million volumes. It is an example of Gothic revival architecture, designed by James Gamble Rogers, adorned with thousands of panes of stained glass created by G. Owen Bonawit.The Library has 15 levels, each with...
, contains about four million volumes in the humanities and some social sciences and also houses specialized research collections in area studies, as well as the department of Manuscripts and Archives. The Beinecke Rare Book and Manuscript Library
Beinecke Rare Book and Manuscript Library
Yale University's Beinecke Rare Book and Manuscript Library was a 1963 gift of the Beinecke family. The building was designed by architect Gordon Bunshaft of the firm of Skidmore, Owings, and Merrill, and is the largest building in the world reserved exclusively for the preservation of rare books...
possesses one of the greatest collections of rare and historical books and manuscripts in existence. Other important libraries include the Lillian Goldman Law Library
Lillian Goldman Law Library
The Lillian Goldman Law Library is the law library of Yale Law School. It is located in the Sterling Law Building and has almost 800,000 volumes of print materials and about 10,000 active serial titles, in which there are 200,000 volumes of foreign and international law materials.-External links:*...
, with nearly 800,000 volumes, the Harvey Cushing/John Hay Whitney Medical Library
Harvey Cushing/John Hay Whitney Medical Library
The Harvey Cushing and John Hay Whitney Medical Library is the central library of the Yale School of Medicine in New Haven, Connecticut. Previously known as the Yale Medical Library, it is one of the finest modern medical libraries...
(including its noteworthy collection of historical medical works), the Irving S. Gilmore Music Library, and the Divinity School Library.

The Yale University Library includes libraries beyond its campus in New Haven, such as the Lewis Walpole Library
Lewis Walpole Library
The Lewis Walpole Library in Farmington, Connecticut possesses important collections of 18th-century English literary manuscripts and books, including the pre-eminent gathering of Horace Walpole's papers and effects from his estate at Strawberry Hill...
in Farmington, Connecticut
Farmington, Connecticut
Farmington is a town located in Hartford County in the Farmington Valley area of central Connecticut in the United States. The population was 25,340 at the 2010 census. It is home to the world headquarters of several large corporations including Carrier Corporation, Otis Elevator Company, and Carvel...
, a research library for eighteenth-century studies and the prime source for the study of Horace Walpole and Strawberry Hill.