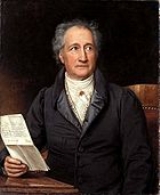 Overview
Johann Wolfgang von Goethe (ˈjoːhan ˈvɔlfɡaŋ fɔn ˈɡøːtə, 28 August 1749 22 March 1832) was a German
Germans
The Germans are a Germanic ethnic group native to Central Europe. The English term Germans has referred to the German-speaking population of the Holy Roman Empire since the Late Middle Ages....
writer
Writer
A writer is a person who produces literature, such as novels, short stories, plays, screenplays, poetry, or other literary art. Skilled writers are able to use language to portray ideas and images....
, pictorial artist
Visual arts
The visual arts are art forms that create works which are primarily visual in nature, such as ceramics, drawing, painting, sculpture, printmaking, design, crafts, and often modern visual arts and architecture...
, biologist
Biology
Biology is a natural science concerned with the study of life and living organisms, including their structure, function, growth, origin, evolution, distribution, and taxonomy. Biology is a vast subject containing many subdivisions, topics, and disciplines...
, theoretical physicist
Theoretical physics
Theoretical physics is a branch of physics which employs mathematical models and abstractions of physics to rationalize, explain and predict natural phenomena...
, and polymath
Polymath
A polymath is a person whose expertise spans a significant number of different subject areas. In less formal terms, a polymath may simply be someone who is very knowledgeable...
. He is considered the supreme genius of modern German literature
German literature
German literature comprises those literary texts written in the German language. This includes literature written in Germany, Austria, the German part of Switzerland, and to a lesser extent works of the German diaspora. German literature of the modern period is mostly in Standard German, but there...
. His works span the fields of poetry
Poetry
Poetry is a form of literary art in which language is used for its aesthetic and evocative qualities in addition to, or in lieu of, its apparent meaning...
, drama
Drama
Drama is the specific mode of fiction represented in performance. The term comes from a Greek word meaning "action" , which is derived from "to do","to act" . The enactment of drama in theatre, performed by actors on a stage before an audience, presupposes collaborative modes of production and a...
, prose
Prose
Prose is the most typical form of written language, applying ordinary grammatical structure and natural flow of speech rather than rhythmic structure...
, philosophy
Philosophy
Philosophy is the study of general and fundamental problems, such as those connected with existence, knowledge, values, reason, mind, and language. Philosophy is distinguished from other ways of addressing such problems by its critical, generally systematic approach and its reliance on rational...
, and science
Science
Science is a systematic enterprise that builds and organizes knowledge in the form of testable explanations and predictions about the universe...
. His Faust
Goethe's Faust
Johann Wolfgang von Goethe's Faust is a tragic play in two parts: and . Although written as a closet drama, it is the play with the largest audience numbers on German-language stages...
has been called the greatest long poem of modern European literature
History of modern literature
The history of literature in the Modern period in Europe begins with the Age of Enlightenment and the conclusion of the Baroque period in the 18th century, succeeding the Renaissance and Early Modern periods....
. His other well-known literary works include his numerous poems, the Bildungsroman
Bildungsroman
In literary criticism, bildungsroman or coming-of-age story is a literary genre which focuses on the psychological and moral growth of the protagonist from youth to adulthood , and in which character change is thus extremely important...
Wilhelm Meister's Apprenticeship
Wilhelm Meister's Apprenticeship
Wilhelm Meister's Apprenticeship is the second novel by Johann Wolfgang von Goethe, published in 1795-96. While his first novel, The Sorrows of Young Werther, featured a hero driven to suicide by despair, the eponymous hero of this novel undergoes a journey of self-realization...
, and the epistolary novel
Epistolary novel
An epistolary novel is a novel written as a series of documents. The usual form is letters, although diary entries, newspaper clippings and other documents are sometimes used. Recently, electronic "documents" such as recordings and radio, blogs, and e-mails have also come into use...
The Sorrows of Young Werther
The Sorrows of Young Werther
The Sorrows of Young Werther is an epistolary and loosely autobiographical novel by Johann Wolfgang von Goethe, first published in 1774; a revised edition of the novel was published in 1787...
.

Goethe was one of the key figures of German literature
German literature
German literature comprises those literary texts written in the German language. This includes literature written in Germany, Austria, the German part of Switzerland, and to a lesser extent works of the German diaspora. German literature of the modern period is mostly in Standard German, but there...
and the movement of Weimar Classicism
Weimar Classicism
Weimar Classicism is a cultural and literary movement of Europe. Followers attempted to establish a new humanism by synthesizing Romantic, classical and Enlightenment ideas...
in the late 18th and early 19th centuries; this movement coincides with Enlightenment
Age of Enlightenment
The Age of Enlightenment was an elite cultural movement of intellectuals in 18th century Europe that sought to mobilize the power of reason in order to reform society and advance knowledge. It promoted intellectual interchange and opposed intolerance and abuses in church and state...
, Sentimentalism
Sentimentalism (literature)
Sentimentalism , as a literary and political discourse, has occurred much in the literary traditions of all regions in the world, and is central to the traditions of Indian literature, Chinese literature, and Vietnamese literature...
(Empfindsamkeit), Sturm und Drang
Sturm und Drang
Sturm und Drang is a proto-Romantic movement in German literature and music taking place from the late 1760s through the early 1780s, in which individual subjectivity and, in particular, extremes of emotion were given free expression in reaction to the perceived constraints of rationalism...
and Romanticism
Romanticism
Romanticism was an artistic, literary and intellectual movement that originated in the second half of the 18th century in Europe, and gained strength in reaction to the Industrial Revolution...
.

What contributions did Goethe make to the sciences?

What were some of Goethe's most important works?

One lives but once in the world.

If you inquire what the people are like here,I must answer, "The same as everywhere!"

Getting along with women, Knocking around with men, Having more credit than money, Thus one goes through the world.

When young one is confident to be able to build palaces for mankind, but when the time comes one has one's hands full just to be able to remove their trash.

Who rides, so late, through night and wind? It is the father with his child. He holds the boy in the crook of his arm He holds him safe, he keeps him warm.

Noble be man, Helpful and good! For that alone Sets hims apart From every other creature On earth.

In art the best is good enough.

A noble person attracts noble people, and knows how to hold on to them.

A talent is formed in stillness, a character in the world's torrent.

Investigate what is, and not what pleases.
More
x