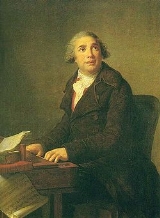 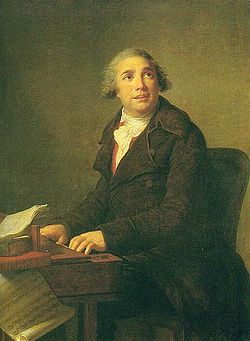 Giovanni Paisiello (May 9, 1740 – June 5, 1816) was an Italian
Italy
Italy , officially the Italian Republic languages]] under the European Charter for Regional or Minority Languages. In each of these, Italy's official name is as follows:;;;;;;;;), is a unitary parliamentary republic in South-Central Europe. To the north it borders France, Switzerland, Austria and...
composer
Composer
A composer is a person who creates music, either by musical notation or oral tradition, for interpretation and performance, or through direct manipulation of sonic material through electronic media...
of the Classical era.

Paisiello was born at Taranto
Taranto
Taranto is a coastal city in Apulia, Southern Italy. It is the capital of the Province of Taranto and is an important commercial port as well as the main Italian naval base....
and educated by the Jesuit
Society of Jesus
The Society of Jesus is a Catholic male religious order that follows the teachings of the Catholic Church. The members are called Jesuits, and are also known colloquially as "God's Army" and as "The Company," these being references to founder Ignatius of Loyola's military background and a...
s there. He became known for his beautiful singing voice and in 1754 was sent to the Conservatorio di S. Onofrio
Music Conservatories of Naples
The Music Conservatory of Naples is a music institution in Naples, southern Italy. It is currently located in the complex of San Pietro a Majella.-San Pietro a Majella:...
at Naples
Naples
Naples is a city in Southern Italy, situated on the country's west coast by the Gulf of Naples. Lying between two notable volcanic regions, Mount Vesuvius and the Phlegraean Fields, it is the capital of the region of Campania and of the province of Naples...
, where he studied under Francesco Durante
Francesco Durante
Francesco Durante was an Italian composer.He was born at Frattamaggiore, in the Kingdom of Two Sicilies, and at an early age he entered the Conservatorio dei poveri di Gesù Cristo, in Naples, where he received lessons from Gaetano Greco. Later he became a pupil of Alessandro Scarlatti at the...
, and eventually became assistant master. For the theatre of the Conservatorio, which he left in 1763, he wrote some intermezzi, one of which attracted so much notice that he was invited to write two operas, La Pupilla and Il Mondo al Rovescio, for Bologna
Bologna
Bologna is the capital city of Emilia-Romagna, in the Po Valley of Northern Italy. The city lies between the Po River and the Apennine Mountains, more specifically, between the Reno River and the Savena River. Bologna is a lively and cosmopolitan Italian college city, with spectacular history,...
, and a third, Il Marchese di Tidipano, for Rome.

In 1772 Paisiello began to write church music, and composed a requiem for Gennara di Borbone, of the reigning dynasty. In the same year he married Cecilia Pallini, and the marriage was a happy one. In 1776 Paisiello was invited by the empress Catherine II of Russia
Catherine II of Russia
Catherine II, also known as Catherine the Great , Empress of Russia, was born in Stettin, Pomerania, Prussia on as Sophie Friederike Auguste von Anhalt-Zerbst-Dornburg...
to St Petersburg, where he remained for eight years, producing, among other charming works, his masterpiece, Il barbiere di Siviglia
Il barbiere di Siviglia (Paisiello)
Il barbiere di Siviglia, ovvero La precauzione inutile is a comic opera by Giovanni Paisiello from a libretto by Giuseppe Petrosellini, even though his name is not identified on the score's title page....
, which soon attained a European reputation. The fate of this opera marks an epoch in the history of Italian art; for with it the gentle suavity cultivated by the masters of the 18th century died out to make room for the dazzling brilliance of a later period.

When, in 1816, Gioachino Rossini set a revised version of the libretto to music, under the title of "Almaviva ossia la inutil precauzione" the fans of Paisiello stormed the stage. Rossini's opera, now known as Il barbiere di Siviglia
The Barber of Seville
The Barber of Seville, or The Futile Precaution is an opera buffa in two acts by Gioachino Rossini with a libretto by Cesare Sterbini. The libretto was based on Pierre Beaumarchais's comedy Le Barbier de Séville , which was originally an opéra comique, or a mixture of spoken play with music...
, is now acknowledged as Rossini's greatest work, while Paisiello's opera is only infrequently produced -- a strange instance of poetical vengeance, since Paisiello himself had many years previously endeavoured to eclipse the fame of Giovanni Battista Pergolesi
Giovanni Battista Pergolesi
Giovanni Battista Pergolesi was an Italian composer, violinist and organist.-Biography:Born at Iesi, Pergolesi studied music there under a local musician, Francesco Santini, before going to Naples in 1725, where he studied under Gaetano Greco and Francesco Feo among others...
by resetting the libretto of his famous intermezzo, La serva padrona
La serva padrona
La serva padrona is an opera buffa by Giovanni Battista Pergolesi to a libretto by Gennaro Antonio Federico, after the play by Jacopo Angello Nelli. The opera is only 45 minutes long and was originally performed as an intermezzo between the acts of a larger serious opera...
.

Paisiello left Russia in 1784, and, after producing Il Re Teodoro at Vienna, entered the service of Ferdinand IV of Naples, where he composed many of his best operas, including Nina and La Molinara. After many vicissitudes, resulting from political and dynastic changes, he was invited to Paris
Paris
Paris is the capital and largest city in France, situated on the river Seine, in northern France, at the heart of the Île-de-France region...
(1802) by Napoleon, whose favor he had won five years previously by composing a march for the funeral of General Hoche. Napoleon treated him munificently, while cruelly neglecting two more famous composers, Luigi Cherubini
Luigi Cherubini
Luigi Cherubini was an Italian composer who spent most of his working life in France. His most significant compositions are operas and sacred music. Beethoven regarded Cherubini as the greatest of his contemporaries....
and Etienne Méhul
Étienne Méhul
Etienne Nicolas Méhul was a French composer, "the most important opera composer in France during the Revolution." He was also the first composer to be called a "Romantic".-Life:...
, to whom the new favorite transferred the hatred he had formerly borne to Cimarosa, Guglielmi and Piccinni.

Paisiello conducted the music of the court in the Tuileries with a stipend of 10,000 francs and 4800 for lodging, but he entirely failed to conciliate the Parisian public, who received his opera Proserpine so coldly that, in 1803, he requested and with some difficulty obtained permission to return to Italy, upon the plea of his wife's ill health. On his arrival at Naples Paisiello was reinstated in his former appointments by Joseph Bonaparte
Joseph Bonaparte
Joseph-Napoléon Bonaparte was the elder brother of Napoleon Bonaparte, who made him King of Naples and Sicily , and later King of Spain...
and Joachim Murat
Joachim Murat
Joachim-Napoléon Murat , Marshal of France and Grand Admiral or Admiral of France, 1st Prince Murat, was Grand Duke of Berg from 1806 to 1808 and then King of Naples from 1808 to 1815...
, but he had taxed his genius beyond its strength, and was unable to meet the demands now made upon it for new ideas. His prospects, too, were precarious. The power of the Bonaparte family was tottering to its fall; and Paisiello's fortunes fell with it. The death of his wife in 1815 tried him severely. His health failed rapidly, and constitutional jealousy of the popularity of others was a source of worry and vexation.

Paisiello is known to have composed 94 operas, which are known for their gracefully beautiful melodies. Perhaps the best-known tune he ever wrote is Nel cor più non mi sento
Nel cor più non mi sento
"Nel cor più non mi sento" is a soprano aria from act 2 in Giovanni Paisiello's 1788 opera L'amor contrastato, ossia La molinara, usually known as La molinara....
from La Molinara, immortalized when Beethoven
Ludwig van Beethoven
Ludwig van Beethoven was a German composer and pianist. A crucial figure in the transition between the Classical and Romantic eras in Western art music, he remains one of the most famous and influential composers of all time.Born in Bonn, then the capital of the Electorate of Cologne and part of...
composed variations based on it. Paisiello also wrote a great deal of church music, including eight masses; as well as fifty-one instrumental compositions and many stand-alone songs. Manuscript scores of many of his operas were presented to the library of the British Museum
British Museum
The British Museum is a museum of human history and culture in London. Its collections, which number more than seven million objects, are amongst the largest and most comprehensive in the world and originate from all continents, illustrating and documenting the story of human culture from its...
by Domenico Dragonetti
Domenico Dragonetti
Domenico Carlo Maria Dragonetti was an Italian double bass virtuoso and composer. He stayed for thirty years in his hometown of Venice, Italy and worked at the Opera Buffa, at the Chapel of San Marco and at the Grand Opera in Vicenza...
.

The library of the Gerolamini at Naples possesses an interesting manuscript compilation recording Paisiello's opinions on contemporary composers, and exhibiting him as a somewhat severe critic, especially of the work of Pergolesi.

The Concise Grove Dictionary of Music notes that "Paisiello was one of the most successful and influential opera composers of his time. Most of his over 80 operas are comic and use a simple, direct and spirited style, latterly with sharper characterization, more colorful scoring and warmer melodies (features that influenced Mozart). His serious operas have less than the conventional amount of virtuoso vocal writing; those for Russia are the closest to Gluck's 'reform' approach."

Paisiello was primarily an opera composer. His instrumental works are therefore imbued with a similar vocally conceived melodic line, granted they may be lacking in the sophisticated counterpoint and motivic work of Haydn and Mozart's music. This characterization, however, does not do justice to the extreme drama and topical contrast in all his works such as the Piano Concerto No. 4 in G minor. Essentially he had mastered all the techniques which made for good opera, and this made his works widely popular and admired throughout Europe.


Pieces for the Ordinary of the Mass