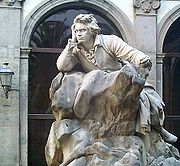 The Music Conservatory of Naples is a music institution in Naples
Naples
Naples is a city in Southern Italy, situated on the country's west coast by the Gulf of Naples. Lying between two notable volcanic regions, Mount Vesuvius and the Phlegraean Fields, it is the capital of the region of Campania and of the province of Naples...
, southern Italy
Italy
Italy , officially the Italian Republic languages]] under the European Charter for Regional or Minority Languages. In each of these, Italy's official name is as follows:;;;;;;;;), is a unitary parliamentary republic in South-Central Europe. To the north it borders France, Switzerland, Austria and...
. It is currently located in the complex of San Pietro a Majella.

The conservatory and adjacent church are today part of the old San Pietro a Majella monastic complex, built at the end of the 13th century and dedicated to the monk Pietro da Morone, who became Pope Celestine V
Pope Celestine V
Pope Saint Celestine V, born Pietro Angelerio , also known as Pietro da Morrone was elected pope in the year 1294, by the papal election of 1292–1294, the last non-conclave in the history of the Roman Catholic Church...
in 1294. The conservatory houses an impressive library of manuscripts pertaining to the lives and musical production of composers who lived and worked in Naples, among whom are Alessandro Scarlatti
Alessandro Scarlatti
Alessandro Scarlatti was an Italian Baroque composer especially famous for his operas and chamber cantatas. He is considered the founder of the Neapolitan school of opera. He was the father of two other composers, Domenico Scarlatti and Pietro Filippo Scarlatti.-Life:Scarlatti was born in...
, Pergolesi
Giovanni Battista Pergolesi
Giovanni Battista Pergolesi was an Italian composer, violinist and organist.-Biography:Born at Iesi, Pergolesi studied music there under a local musician, Francesco Santini, before going to Naples in 1725, where he studied under Gaetano Greco and Francesco Feo among others...
, Domenico Cimarosa
Domenico Cimarosa
Domenico Cimarosa was an Italian opera composer of the Neapolitan school...
, Rossini, Bellini
Vincenzo Bellini
Vincenzo Salvatore Carmelo Francesco Bellini was an Italian opera composer. His greatest works are I Capuleti ed i Montecchi , La sonnambula , Norma , Beatrice di Tenda , and I puritani...
, and Donizetti. Vittorio Monti
Vittorio Monti
Vittorio Monti was an Italian composer, violinist, and conductor.Monti was born in Naples, where he studied violin and composition at the Conservatorio di San Pietro a Majella...
, who around 1904 composed the famous Csárdás
Csárdás (Monti)
Csárdás is perhaps the most famous composition of Vittorio Monti. A rhapsodical concert piece written in 1904, it is a well-known folk piece based on a Hungarian csárdás. It was originally composed for violin, mandolin or piano...
, studied violin and composition at this conservatory. The historical museum has a display of rare antique musical instruments.

San Pietro a Majella is actually the last in a long string of establishments that have been music conservatories in Naples. Their existence goes back to the Spanish rule of the city as a vicerealm starting in the early 16th century. These early conservatories were Santa Maria di Loreto, Pietà dei Turchini, Sant'Onofrio a Capuana, and I Poveri di Gesù Cristo. They enjoyed a considerable reputation as training grounds not only for young children to be trained in church music, but, eventually, as a feeder system into the world of commercial music once that opened up in the early 17th century.

That Conservatorio della Pietà dei Turchini was built in 1583 and is the only one of the original four sites that is still easy to find. Indeed, the church is still prominent and open to the faithful. It stands on via Medina not far from the city hall. The church has a historical marker posted in front that explains its role as one of the original four. The name "conservatory" originally indicated a place that "conserved" orphans and young women. All of the institutions instructed their wards in music; thus was born the modern meaning of "music school."

The Conservatorio dei Poveri di Gesù Cristo was founded in 1589 by Marcello Fossataro, a Franciscan monk. It was adjacent to the church of Santa Maria a Colonna on via dei Tribunale. Illustrious names connected with the school include the philosopher Giovan Battista Vico; a "maestro de [sic] grammatica" from 1620 to 1627. Musical luminaries at the conservatory included Francesco Durante
Francesco Durante
Francesco Durante was an Italian composer.He was born at Frattamaggiore, in the Kingdom of Two Sicilies, and at an early age he entered the Conservatorio dei poveri di Gesù Cristo, in Naples, where he received lessons from Gaetano Greco. Later he became a pupil of Alessandro Scarlatti at the...
, Nicola Porpora
Nicola Porpora
Nicola Porpora was an Italian composer of Baroque operas and teacher of singing, whose most famous singing student was the castrato Farinelli. One of his other students was composer Matteo Capranica.-Biography:Porpora was born in Naples...
, and Giovanni Battista Pergolesi
Giovanni Battista Pergolesi
Giovanni Battista Pergolesi was an Italian composer, violinist and organist.-Biography:Born at Iesi, Pergolesi studied music there under a local musician, Francesco Santini, before going to Naples in 1725, where he studied under Gaetano Greco and Francesco Feo among others...
.

Santa Maria di Loreto was built in 1537 and was the original conservatory in Naples, coming at the beginning of the Spanish expansion of Naples under the city's most famous viceroy, don Pedro de Toledo
Pedro Álvarez de Toledo
Don Pedro Álvarez de Toledo y Zúñiga, jure uxoris Marquis of Villafranca del Bierzo was the first effective Spanish viceroy of Naples, 1532 - 1552, responsible for considerable social, economic and urban change in the city and southern Italian kingdom, in general.-Early life:He was born in 1484...
. It is the first secular music conservatory. This academy counts as its alumni Domenico Cimarosa
Domenico Cimarosa
Domenico Cimarosa was an Italian opera composer of the Neapolitan school...
. Old maps show Santa Maria di Loreto to have been a seafront "borgo" —a separate section of town. Thus, the conservatory was beyond the Spanish fortifications that guarded the southeastern approach to Naples.

Sant'Onofrio a Capuana dates from 1578 and counts as its alumni Niccoló Jommelli
Niccolò Jommelli
Niccolò Jommelli was an Italian composer. He was born in Aversa and died in Naples. Along with other composers mainly in the Holy Roman Empire and France, he made important changes to opera and reduced the importance of star singers.-Early life:Jommelli was born to Francesco Antonio Jommelli and...
, Giovanni Paisiello
Giovanni Paisiello
Giovanni Paisiello was an Italian composer of the Classical era.-Life:Paisiello was born at Taranto and educated by the Jesuits there. He became known for his beautiful singing voice and in 1754 was sent to the Conservatorio di S. Onofrio at Naples, where he studied under Francesco Durante, and...
, Niccoló Piccinni
Niccolò Piccinni
Niccolò Piccinni was an Italian composer of symphonies, sacred music, chamber music, and opera. Although he is somewhat obscure, even to music lovers today, Piccinni was one of the most popular composers of opera—particularly the Neapolitan opera buffa—of his day...
, and Antonio Sacchini
Antonio Sacchini
Antonio Maria Gasparo Sacchini was an Italian opera composer.Sacchini was born in Florence, but was raised in Naples, where he received his musical education at the San Onofrio conservatory. He wrote his first operas in Naples, thereafter moving to Venice, then London and eventually Paris, where...
, four of the great names in the 18th century Neapolitan music. The Italian Baroque composer Cristofaro Caresana
Cristofaro Caresana
Cristofaro or Cristoforo Caresana was an Italian Baroque composer, organist and tenor. He was an early representative of the Neapolitan operatic school.Born in Venice, his precise birthday is not known...
was a director from 1667 until 1690. The original building still stands, just across the street on the north side of the old Vicaria, the tribunale, the Naples Hall of Justice.

In 1806, with Napoleon Bonaparte's brother, Joseph
Joseph Bonaparte
Joseph-Napoléon Bonaparte was the elder brother of Napoleon Bonaparte, who made him King of Naples and Sicily , and later King of Spain...
, installed as the king of Naples in what would be a decade of French rule of the kingdom, monastic life in the kingdom was drastically reorganized and the four monastery music schools were consolidated into a single building, the Church of San Sebastiano, not far from the modern conservatory. Finally, in 1826 that consolidated conservatory was moved to the present site.