Encyclopedia
The Chinese Village in the Alexander Park of Tsarskoye Selo
Tsarskoye Selo
Tsarskoye Selo is the town containing a former Russian residence of the imperial family and visiting nobility, located south from the center of St. Petersburg. It is now part of the town of Pushkin and of the World Heritage Site Saint Petersburg and Related Groups of Monuments.-History:In...
, Russia
Russia
Russia or , officially known as both Russia and the Russian Federation , is a country in northern Eurasia. It is a federal semi-presidential republic, comprising 83 federal subjects...
was Catherine the Great's attempt to follow the 18th-century fashion for the Chinoiserie
Chinoiserie
Chinoiserie, a French term, signifying "Chinese-esque", and pronounced ) refers to a recurring theme in European artistic styles since the seventeenth century, which reflect Chinese artistic influences...
.

Probably inspired by a similar project in Drottningholm
Drottningholm
Drottningholm, literally "Queen's Islet", is a locality situated in Ekerö Municipality, Stockholm County, Sweden, with 410 inhabitants in 2005....
, Catherine ordered Antonio Rinaldi and Charles Cameron
Charles Cameron (architect)
Charles Cameron was a Scottish architect who made an illustrious career at the court of Catherine II of Russia. Cameron, practitioner of early neoclassical architecture, was the chief architect of Tsarskoye Selo and Pavlovsk palaces and the adjacent new town of Sophia from his arrival in Russia in...
to model the village after a contemporary Chinese engraving from her personal collection. The village was to consist of 18 stylized Chinese houses (only ten were completed), dominated by an octagonal domed observatory (never completed at all). After Catherine failed in her ambition to procure a genuine Chinese architect, the Russian ambassador in London
London
London is the capital city of :England and the :United Kingdom, the largest metropolitan area in the United Kingdom, and the largest urban zone in the European Union by most measures. Located on the River Thames, London has been a major settlement for two millennia, its history going back to its...
was instructed to obtain a replica of William Chambers
William Chambers (architect)
Sir William Chambers was a Scottish architect, born in Gothenburg, Sweden, where his father was a merchant. Between 1740 and 1749 he was employed by the Swedish East India Company making several voyages to China where he studied Chinese architecture and decoration.Returning to Europe, he studied...
's pagoda in the Royal Botanic Gardens, Kew
Royal Botanic Gardens, Kew
The Royal Botanic Gardens, Kew, usually referred to as Kew Gardens, is 121 hectares of gardens and botanical glasshouses between Richmond and Kew in southwest London, England. "The Royal Botanic Gardens, Kew" and the brand name "Kew" are also used as umbrella terms for the institution that runs...
for Tsarskoye Selo, a central structure of the Chinoiserie architecture.

Catherine's death in 1796 led to the works being suspended. It was not until 1818 that Alexander I of Russia
Alexander I of Russia
Alexander I of Russia , served as Emperor of Russia from 23 March 1801 to 1 December 1825 and the first Russian King of Poland from 1815 to 1825. He was also the first Russian Grand Duke of Finland and Lithuania....
asked Vasily Stasov
Vasily Stasov
Vasily Petrovich Stasov was a Russian architect.-Biography:Stasov was born in Moscow....
to overhaul the village in order to provide accommodation for his guests (picture). Although much of the original orientalizing decor was lost as a result, the renovated village provided habitation for such eminent visitors as Nikolai Karamzin who worked on his History of the Russian State in one of the houses between 1822 and 1825. 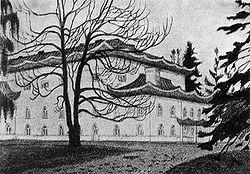 The Chinese Opera Theatre was constructed not far from the village in 1779. It was there that an Italian composer Giovanni Paisiello
Giovanni Paisiello
Giovanni Paisiello was an Italian composer of the Classical era.-Life:Paisiello was born at Taranto and educated by the Jesuits there. He became known for his beautiful singing voice and in 1754 was sent to the Conservatorio di S. Onofrio at Naples, where he studied under Francesco Durante, and...
would present his new operas to the Russian empress. The premiere of Leo Tolstoy
Leo Tolstoy
Lev Nikolayevich Tolstoy was a Russian writer who primarily wrote novels and short stories. Later in life, he also wrote plays and essays. His two most famous works, the novels War and Peace and Anna Karenina, are acknowledged as two of the greatest novels of all time and a pinnacle of realist...
's The Fruits of Enlightenment was also produced there. The theatre was burnt to the ground on 15 September 1941 and has never been rebuilt.

Three remarkable bridges lead to the village. The Dragon Bridge
Dragon Bridge
Dragon Bridge is a road bridge located in Ljubljana, the capital of Slovenia. It is situatedin the northeast of Vodnik Square across the Ljubljanica river. Built in the beginning of the 20th century, the bridge is today protected as a technical monument....
, so named after four zink figures of winged dragons, and the Large Chinese Bridge
Large Chinese Bridge
The Large Chinese Bridge is a small bridge over the Krestovy Channel located in the Chinese Village in the Alexander Park of Tsarskoye Selo 25 km south of the center of St. Petersburg. The bridge is located near the Chinese Theater, opposite the central gates of the Catherine Palace. It is one of...
, noted for pink granite vases and imitation coral branches, were completed in 1785. The Cross-Shaped Bridge had been constructed by the Neyelov Brothers six years earlier (illustrated, to the right).

The village was renovated under the direction of Ippolit Monighetti
Ippolit Monighetti
Ippolit Antonovich Monighetti was a Russian architect of Swiss descent who worked for the Romanov family.Monighetti attended the Stroganov Art School and then studied at the Imperial Academy of Arts under Alexander Brullov, matriculating in 1839 with a gold medal...
in 1859-61. The cottages sustained serious damage during the Nazi occupation but were restored in the 1990s to provide lodgings for VIP guests (picture).