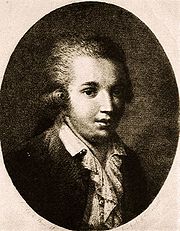 Domenico Cimarosa was an Italian
Music of Italy
The music of Italy ranges across a broad spectrum of opera and instrumental classical music and a body of popular music drawn from both native and imported sources. Music has traditionally been one of the cultural markers of Italian national and ethnic identity and holds an important position in...
opera
Opera
Opera is an art form in which singers and musicians perform a dramatic work combining text and musical score, usually in a theatrical setting. Opera incorporates many of the elements of spoken theatre, such as acting, scenery, and costumes and sometimes includes dance...
composer
Composer
A composer is a person who creates music, either by musical notation or oral tradition, for interpretation and performance, or through direct manipulation of sonic material through electronic media...
of the Neapolitan school. He wrote more than eighty operas during his lifetime, including his masterpiece, Il matrimonio segreto
Il matrimonio segreto
Il matrimonio segreto is an opera in two acts, music by Domenico Cimarosa, on a libretto by Giovanni Bertati, based on the play The Clandestine Marriage by George Colman the Elder and David Garrick...
(1792).

Cimarosa was born in Aversa
Aversa
Aversa is a town and comune in the Province of Caserta in Campania southern Italy, about 15 kilometres north of Naples. It is the centre of an agricultural district, the agro aversano, producing wine and cheese...
in Campania
Campania
Campania is a region in southern Italy. The region has a population of around 5.8 million people, making it the second-most-populous region of Italy; its total area of 13,590 km² makes it the most densely populated region in the country...
.

His parents were poor, but, anxious to give their son a good education, they sent him to a free school connected with one of the monasteries in Naples after moving to that city. The organist of the monastery, Padre Polcano, was struck by the boy's intellect, and voluntarily instructed him in the elements of music and also in the ancient and modern literature of his country. Because of his influence, Cimarosa obtained a scholarship at the musical institute of Santa Maria di Loreto
Music Conservatories of Naples
The Music Conservatory of Naples is a music institution in Naples, southern Italy. It is currently located in the complex of San Pietro a Majella.-San Pietro a Majella:...
in Naples, where he remained for eleven years, chiefly studying with great masters of the old Italian school; Niccoló Piccinni
Niccolò Piccinni
Niccolò Piccinni was an Italian composer of symphonies, sacred music, chamber music, and opera. Although he is somewhat obscure, even to music lovers today, Piccinni was one of the most popular composers of opera—particularly the Neapolitan opera buffa—of his day...
, Antonio Maria Gaspare Sacchini, and other musicians of repute are mentioned among his teachers.

At the age of twenty-three, Cimarosa began his career as a composer with an opera buffa
Opera buffa
Opera buffa is a genre of opera. It was first used as an informal description of Italian comic operas variously classified by their authors as ‘commedia in musica’, ‘commedia per musica’, ‘dramma bernesco’, ‘dramma comico’, ‘divertimento giocoso' etc...
called Le stravaganze del conte, first performed at the Teatro del Fiorentini at Naples
Naples
Naples is a city in Southern Italy, situated on the country's west coast by the Gulf of Naples. Lying between two notable volcanic regions, Mount Vesuvius and the Phlegraean Fields, it is the capital of the region of Campania and of the province of Naples...
in 1772. The work met with approval, and was followed in the same year by Le pazzie di Stelladaura e di Zoroastro, a farce
Farce
In theatre, a farce is a comedy which aims at entertaining the audience by means of unlikely, extravagant, and improbable situations, disguise and mistaken identity, verbal humour of varying degrees of sophistication, which may include word play, and a fast-paced plot whose speed usually increases,...
full of humour and eccentricity. This work was also successful, and the fame of the young composer began to spread all over Italy. In 1774, he was invited to Rome
Rome
Rome is the capital of Italy and the country's largest and most populated city and comune, with over 2.7 million residents in . The city is located in the central-western portion of the Italian Peninsula, on the Tiber River within the Lazio region of Italy.Rome's history spans two and a half...
to write an opera for the stagione of that year; and there he produced another comic opera called L'italiana in Londra
The Italian Girl in London
The Italian Girl in London is one of eight comic operas, termed intermezzi, which Domenico Cimarosa wrote between 1777 and 1784 for the Teatro Valle, a handsome neo-classical Roman theatre built in 1726, which still stands today....
.

Over the next thirteen years, Cimarosa wrote a number of operas for the various theatres of Italy, living temporarily in Rome, in Naples, or wherever else his vocation as conductor of his works happened to take him. From 1784 to 1787, he lived in Florence
Florence
Florence is the capital city of the Italian region of Tuscany and of the province of Florence. It is the most populous city in Tuscany, with approximately 370,000 inhabitants, expanding to over 1.5 million in the metropolitan area....
, writing exclusively for the theatre of that city. The productions of this period of his life are very numerous, consisting of operas (both comic and serious), cantata
Cantata
A cantata is a vocal composition with an instrumental accompaniment, typically in several movements, often involving a choir....
s, and various sacred compositions. The following works may be mentioned, among many others: Cajo Mario; the three Biblical operas, Assalone, La giuditta, and Il sacrificio d'Abramo; Il convito di pietra; and La ballerina amante, a comic opera
Comic opera
Comic opera denotes a sung dramatic work of a light or comic nature, usually with a happy ending.Forms of comic opera first developed in late 17th-century Italy. By the 1730s, a new operatic genre, opera buffa, emerged as an alternative to opera seria...
first performed at Venice
Venice
Venice is a city in northern Italy which is renowned for the beauty of its setting, its architecture and its artworks. It is the capital of the Veneto region...
with enormous success.

In 1787, Cimarosa went to St. Petersburg by invitation of Empress Catherine II. He remained at her court for four years and wrote an enormous number of compositions, mostly of the nature of pièces d'occasion; of most of these, not even the names are on record. One important exception was a Requiem
Requiem
A Requiem or Requiem Mass, also known as Mass for the dead or Mass of the dead , is a Mass celebrated for the repose of the soul or souls of one or more deceased persons, using a particular form of the Roman Missal...
, entitled Messa da Requiem in G Minor. The piece, composed in 1787, was commissioned to mark the death of the wife of the French ambassador in St. Petersburg. In 1792, Cimarosa left St. Petersburg and went to Vienna
Vienna
Vienna is the capital and largest city of the Republic of Austria and one of the nine states of Austria. Vienna is Austria's primary city, with a population of about 1.723 million , and is by far the largest city in Austria, as well as its cultural, economic, and political centre...
at the invitation of Emperor Leopold II
Leopold II, Holy Roman Emperor
Leopold II , born Peter Leopold Joseph Anton Joachim Pius Gotthard, was Holy Roman Emperor and King of Hungary and Bohemia from 1790 to 1792, Archduke of Austria and Grand Duke of Tuscany from 1765 to 1790. He was a son of Emperor Francis I and his wife, Empress Maria Theresa...
. Here, he produced his masterpiece, Il matrimonio segreto
Il matrimonio segreto
Il matrimonio segreto is an opera in two acts, music by Domenico Cimarosa, on a libretto by Giovanni Bertati, based on the play The Clandestine Marriage by George Colman the Elder and David Garrick...
, which ranks among the highest achievements of light operatic music. In 1793, Cimarosa returned to Naples, where Il matrimonio segreto and other works were received with great acclaim. Among the works belonging to his last stay in Naples that may be mentioned is the charming opera, Le astuzie femminili.

This period of his life is said to have been embittered by the intrigues of envious and hostile persons, among whom figured his old rival, Giovanni Paisiello
Giovanni Paisiello
Giovanni Paisiello was an Italian composer of the Classical era.-Life:Paisiello was born at Taranto and educated by the Jesuits there. He became known for his beautiful singing voice and in 1754 was sent to the Conservatorio di S. Onofrio at Naples, where he studied under Francesco Durante, and...
. During the occupation of Naples by the troops of the French Republic, Cimarosa joined the liberal party, and on the return of the Bourbons, was, like many of his political friends, condemned to death. By the intercession of influential admirers, his sentence was commuted to banishment, and he left Naples with the intention of returning to St. Petersburg—but his health was broken, and after much suffering, he died in Venice on 11 January 1801 of inflammation of the intestine
Intestine
In human anatomy, the intestine is the segment of the alimentary canal extending from the pyloric sphincter of the stomach to the anus and, in humans and other mammals, consists of two segments, the small intestine and the large intestine...
s. The nature of his disease led to the rumor of his having been poisoned by his enemies; however, a formal inquest
Inquest
Inquests in England and Wales are held into sudden and unexplained deaths and also into the circumstances of discovery of a certain class of valuable artefacts known as "treasure trove"...
proved this to be unfounded. He worked till the last moment of his life, and one of his operas, Artemizia, remained unfinished at his death. The place of his death is marked by a memorial in Campo San Angelo near the calle de Caffetier. 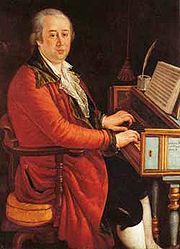