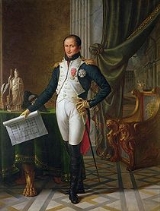 Encyclopedia
Joseph-Napoléon Bonaparte (7 January 1768 – Italy, 28 July 1844) was the elder brother of Napoleon Bonaparte, who made him King of Naples and Sicily (1806–1808), and later King of Spain (1808–1813, as José I). After the fall of Napoleon, Joseph styled himself Comte de Survilliers
Survilliers
Survilliers is a commune in the Val-d'Oise department in Île-de-France in northern France.-References:** -External links:* * *...
.

Joseph was born Giuseppe Buonaparte in 1768 to Carlo Buonaparte
Carlo Buonaparte
Carlo Maria Buonaparte was a Corsican lawyer and politician who briefly served as a personal assistant of the revolutionary leader Pasquale Paoli and eventually rose to become Corsica's representative to the court of Louis XVI...
and Maria Letizia Ramolino at Corte
Corte
Corte is a commune in the Haute-Corse department of France on the island of Corsica. It is the fourth-largest commune in Corsica .-Administration:Corte is a subprefecture of the Haute-Corse department.-History:...
, the capital of the Corsican Republic
Corsican Republic
In November 1755, Pasquale Paoli proclaimed Corsica a sovereign nation, the Corsican Republic, independent from the Republic of Genoa. He created the Corsican Constitution, which was the first constitution written under Enlightenment principles, including the first implementation of female...
. In the year of his birth Corsica was invaded by France
French conquest of Corsica
The French Conquest of Corsica took place during 1768 and 1769 when the Corsican Republic was occupied by French forces under the command of the Comte de Vaux....
and was conquered the following year. His father was originally a follower of the Corsican Patriot leader Pasquale Paoli
Pasquale Paoli
Filippo Antonio Pasquale di Paoli , was a Corsican patriot and leader, the president of the Executive Council of the General Diet of the People of Corsica...
but later became a supporter of French rule. As a lawyer, politician, and diplomat, Joseph served in the Cinq-Cents and was the French ambassador to Rome. He married Julie Clary
Julie Clary
Marie Julie Bonaparte was Queen consort of Spain and the Indies, Naples and Sicily as the spouse of King Joseph Bonaparte, who was King of Naples and Sicily from January 1806 to June 1808, and later King of Spain and the Spanish West Indies from 25 June 1808 to June 1813.- Background:Julie Clary...
on 1 August 1794 in Cuges-les-Pins, France. They had three daughters, Julie Joséphine Bonaparte (1796–1796), Zénaïde Laetitia Julie Bonaparte
Zénaïde Laetitia Julie Bonaparte
Zénaïde Laetitia Julie Bonaparte, Princess of Canino and Musignano was the elder daughter of Joseph Bonaparte and Julie Clary, and the wife of Charles Lucien Bonaparte, who was also her cousin...
(1801–1854) and Charlotte Napoléone Bonaparte
Charlotte Napoléone Bonaparte
Charlotte Napoléone Bonaparte was the daughter of Joseph Bonaparte, the older brother of Emperor Napoleon I, and Julie Clary. Her mother was the sister of Désirée Clary, Napoleon's first love. Charlotte married her first cousin Napoleon Louis, the second son of Louis Bonaparte and Hortense de...
(1802–1839). He claimed the surviving two daughters as his heirs. He also sired two children with Maria Giulia, the Countess of Atri (Giulio, born 1806 and Teresa, born 1808). Joseph had two American daughters born at Point Breeze his estate in New Jersey by his mistress Annette Savage ("Madame de la Folie"), Pauline Anne who died young and Catherine Charlotte (b. 1822, d. 1890) who married Col. Zebulon Howell Benton of Jefferson County, New York, and had issue .

The Château de Villandry
Château de Villandry
The Château de Villandry is a castle-palace located in Villandry, in the département of Indre-et-Loire, France.The lands where an ancient fortress once stood were known as Colombier until the 17th century...
had been seized by the French Revolution
French Revolution
The French Revolution , sometimes distinguished as the 'Great French Revolution' , was a period of radical social and political upheaval in France and Europe. The absolute monarchy that had ruled France for centuries collapsed in three years...
ary government and in the early 19th century Joseph's brother, Emperor Napoleon, acquired the château for him. In 1806, Joseph was given military command of Naples
Naples
Naples is a city in Southern Italy, situated on the country's west coast by the Gulf of Naples. Lying between two notable volcanic regions, Mount Vesuvius and the Phlegraean Fields, it is the capital of the region of Campania and of the province of Naples...
, and shortly afterward was made king by Napoleon, to be replaced after two years by his sister's husband, Joachim Murat
Joachim Murat
Joachim-Napoléon Murat , Marshal of France and Grand Admiral or Admiral of France, 1st Prince Murat, was Grand Duke of Berg from 1806 to 1808 and then King of Naples from 1808 to 1815...
, when Joseph was made king of Spain in August 1808, soon after the French invasion.

Joseph somewhat reluctantly left Naples and arrived in Spain just in time for the commencement of the Spanish revolt against French rule, and the beginning of the Peninsular War
Peninsular War
The Peninsular War was a war between France and the allied powers of Spain, the United Kingdom, and Portugal for control of the Iberian Peninsula during the Napoleonic Wars. The war began when French and Spanish armies crossed Spain and invaded Portugal in 1807. Then, in 1808, France turned on its...
. After a series of early defeats of the French by the remnants of the Spanish regular armies (stiffened by militia and guerrillas) Joseph temporarily retreated with much of the French Army to northern Spain. Feeling himself in an ignominious position, Joseph then proposed his own abdication from the Spanish throne, hoping that Napoleon would sanction his return to the Neapolitan Throne he had formerly occupied. Napoleon dismissed Joseph's misgivings out of hand; and, to back up the raw and ill-trained levies he had initially allocated to Spain—the Emperor sent heavy French reinforcements to assist Joseph in maintaining his position as king of Spain. Despite the easy recapture of Madrid, and nominal control by Joseph's government over many cities and provinces, Joseph's reign over Spain was always tenuous at best, and constantly resisted by pro-Bourbon guerrillas. Joseph and his supporters never established complete control over the country.

King Joseph's Spanish supporters were called josefinos or afrancesados (frenchified). During his reign, he ended the Spanish Inquisition
Spanish Inquisition
The Tribunal of the Holy Office of the Inquisition , commonly known as the Spanish Inquisition , was a tribunal established in 1480 by Catholic Monarchs Ferdinand II of Aragon and Isabella I of Castile. It was intended to maintain Catholic orthodoxy in their kingdoms, and to replace the Medieval...
, partly because Napoleon was at odds with Pope Pius VII at the time. Despite such efforts to win popularity, Joseph's foreign birth and support, plus his membership in a Mason
Freemasonry
Freemasonry is a fraternal organisation that arose from obscure origins in the late 16th to early 17th century. Freemasonry now exists in various forms all over the world, with a membership estimated at around six million, including approximately 150,000 under the jurisdictions of the Grand Lodge...
ic lodge, virtually guaranteed he would never be accepted as legitimate by the bulk of the Spanish people. During Joseph's rule of Spain, Venezuela declared independence (1810) from Spain, the first nation to do so. The king had virtually no influence over the course of the ongoing Peninsular War
Peninsular War
The Peninsular War was a war between France and the allied powers of Spain, the United Kingdom, and Portugal for control of the Iberian Peninsula during the Napoleonic Wars. The war began when French and Spanish armies crossed Spain and invaded Portugal in 1807. Then, in 1808, France turned on its...
: Joseph's nominal command of French forces in Spain was mostly illusory, as the French commanders theoretically subordinate to King Joseph insisted on checking with Napoleon before carrying out Joseph's instructions.

King Joseph abdicated and returned to France after defeat of the main French forces to the British at the Battle of Vitoria
Battle of Vitoria
At the Battle of Vitoria an allied British, Portuguese, and Spanish army under General the Marquess of Wellington broke the French army under Joseph Bonaparte and Marshal Jean-Baptiste Jourdan near Vitoria in Spain, leading to eventual victory in the Peninsular War.-Background:In July 1812, after...
in 1813. He was seen by Bonapartists as the rightful Emperor of the French after the death of Napoleon's own son Napoleon II in 1832, although he did little to advance his claim.

Joseph lived primarily in the United States (where he sold the jewels of the Spanish crown he had stolen when he left Spain) in the period 1817-1832, initially in
New York City
New York City
New York is the most populous city in the United States and the center of the New York Metropolitan Area, one of the most populous metropolitan areas in the world. New York exerts a significant impact upon global commerce, finance, media, art, fashion, research, technology, education, and...
and Philadelphia, where his house became the centre of activity for French expatriates, but later moved to an estate, formerly owned by Stephen Sayre, called Point Breeze in Bordentown
Bordentown, New Jersey
Bordentown City is in Burlington County, New Jersey, United States. As of the 2010 United States Census, the city population was 3,924. Bordentown is located at the confluence of the Delaware River, Blacks Creek and Crosswicks Creek...
, New Jersey
New Jersey
New Jersey is a state in the Northeastern and Middle Atlantic regions of the United States. , its population was 8,791,894. It is bordered on the north and east by the state of New York, on the southeast and south by the Atlantic Ocean, on the west by Pennsylvania and on the southwest by Delaware...
. Joseph's home was located near the confluence of Crosswicks Creek and the Delaware River. He considerably expanded Sayre's home and created extensive gardens in the picturesque style. When his first home was destroyed by fire in January 1820 he converted his stables into a second grand house. At Point Breeze, Joseph entertained many of the leading intellectuals and politicians of his day.

He was also reputed to have encountered the Jersey Devil
Jersey Devil
The Jersey Devil is a legendary creature or cryptid said to inhabit the Pine Barrens of Southern New Jersey, United States. The creature is often described as a flying biped with hooves, but there are many variations...
while hunting there.

Reputedly some Mexican revolutionaries offered to crown him Emperor of Mexico in 1820 but he refused.

Joseph Bonaparte returned to Europe, where he died in Florence
Florence
Florence is the capital city of the Italian region of Tuscany and of the province of Florence. It is the most populous city in Tuscany, with approximately 370,000 inhabitants, expanding to over 1.5 million in the metropolitan area....
, Italy, and was buried in the Les Invalides
Les Invalides
Les Invalides , officially known as L'Hôtel national des Invalides , is a complex of buildings in the 7th arrondissement of Paris, France, containing museums and monuments, all relating to the military history of France, as well as a hospital and a retirement home for war veterans, the building's...
building complex in Paris.


For further reading see, The University of Pennsylvania Press's award winning biography: "The Man who had been King: The American Exile of Napoleon's Brother Joseph" written by Patricia Tyson Stroud. This book received the New Jersey Council for the Humanities first place book award in 2006.