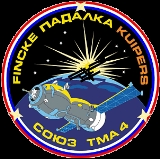 Padalka is married to Irina Anatoliyevna Padalka (Ponomareva). They have three daughters: Yuliya, Yekaterina, and Sonya. He enjoys the theater, parachute sport and diving.

Gennady Palka was selected as a cosmonaut candidate to start training at the Gagarin Cosmonaut Training Center in 1989. From June 1989 to January 1991, he attended basic space training. In 1991, Padalka was qualified as a test-cosmonaut.

On August 13, 1998, Gennady launched with Sergei Avdeyev
Sergei Avdeyev
Sergei Avdeyev is a Russian engineer and cosmonaut.Avdeyev was born in Chapayevsk, Samara Oblast , Russian SFSR. He graduated from in 1979 as an engineer-physicist. From 1979 to 1987 he worked as an engineer for NPO Energiya...
aboard Soyuz TM-28
Soyuz TM-28
TM-28 was a Soyuz mission to the Mir space station.-Crew:-Mission Accomplishments:*Docked with Mir*Baturin is first Russian politician in space...
to become the crew of Mir Expedition 26, whose primary mission was to make repairs to life support systems and prepare the station for deorbit, which was to take place after Expedition 27. On February 8, 1999 at 11:23 GMT Padalka and Avdeyev undocked from Mir's -X port in Soyuz TM-28, and redocked at the +X Kvant port at 11:39 GMT, freeing up the front port for the Soyuz TM-29
Soyuz TM-29
Soyuz TM-29 was a Russian manned spacecraft launched from the Baikonur Cosmodrome aboard a Soyuz 11A511U rocket. It docked with Mir on February 22 at 05:36 GMT with Cosmonauts Viktor Afanasyev of Russia, Jean-Pierre Haigneré of France, and Ivan Bella of Slovakia aboard. Since two crew seats had...
docking. He returned to Earth on board the Soyuz TM-28 capsule on February 28, 1999. The Soyuz TM-28 undocked from the Kvant rear docking port on February 27 at 22:52 GMT and landed in Kazakhstan on February 28 at 02:14 GMT. Padalka accumulated 198 days and 16 hours of space travel during the mission.

June 1999 through July 2000, Padalka trained for a space flight on a Soyuz-TM
Soyuz-TM
The Soyuz-TM crew transports were fourth generation Soyuz spacecraft used for ferry flights to the Mir and ISS space stations...
transport vehicle as an ISS
International Space Station
The International Space Station is a habitable, artificial satellite in low Earth orbit. The ISS follows the Salyut, Almaz, Cosmos, Skylab, and Mir space stations, as the 11th space station launched, not including the Genesis I and II prototypes...
contingency crew commander. August 2000 to November 2001, he trained for a space flight as the Expedition 4
Expedition 4
Expedition 4 was the fourth expedition to the International Space Station.-Crew:-Mission parameters:*Perigee: 384 km*Apogee: 396 km*Inclination: 51.6°*Period: 92 min...
back-up crew commander.

In March 2002, Padalka was assigned as commander of the ISS Expedition 9
Expedition 9
Expedition 9 was the 9th expedition to the International Space Station.-Crew:-Mission parameters:*Perigee: 384 km*Apogee: 396 km*Inclination: 51.6°*Period: 92 minthumb|left|250px|Edward M...
crew. Expedition 9 was launched from the Baikonur Cosmodrome
Baikonur Cosmodrome
The Baikonur Cosmodrome , also called Tyuratam, is the world's first and largest operational space launch facility. It is located in the desert steppe of Kazakhstan, about east of the Aral Sea, north of the Syr Darya river, near Tyuratam railway station, at 90 meters above sea level...
, Kazakhstan
Kazakhstan
Kazakhstan , officially the Republic of Kazakhstan, is a transcontinental country in Central Asia and Eastern Europe. Ranked as the ninth largest country in the world, it is also the world's largest landlocked country; its territory of is greater than Western Europe...
aboard the Soyuz TMA-4
Soyuz TMA-4
Soyuz TMA-4 was a Soyuz mission to the International Space Station launched by a Soyuz FG launch vehicle. It was launched on April 19, 2004 from Baikonur Cosmodrome. Gennady Padalka from Russia, Michael Fincke from the USA and André Kuipers from the Netherlands were flown to the International...
spacecraft, and docked with the ISS on April 21, 2004. Following a week of joint operations and handover briefings, they replaced the Expedition 8
Expedition 8
Expedition 8 was the eighth expedition to the International Space Station.-Crew:-Mission parameters:*Perigee: 384 km*Apogee: 396 km*Inclination: 51.6°*Period: 92 min*Docked: 20 October 2003 - 07:15:58 UTC...
crew who returned to Earth. In a six-month tour of duty
Tour of duty
In the Navy, a tour of duty is a period of time spent performing operational duties at sea, including combat, performing patrol or fleet duties, or assigned to service in a foreign country....
aboard the station Padalka continued ISS science operations, maintained Station systems, and performed four spacewalks. The Expedition 9 mission concluded after undocking and landed back in Kazakhstan on October 23, 2004. In completing this mission, Padalka logged an additional 187 days, 21 minutes and 17 seconds in space, and 15 hours, 45 minutes and 22 seconds of EVA time.

Padalka returned to the ISS in 2009 to serve as commander of Expeditions 19
Expedition 19
Expedition 19 was the 19th long-duration flight to the International Space Station. This expedition launched on 26 March 2009, at 11:49 UTC aboard the Soyuz TMA-14 spacecraft. Expedition 19 was the final three crew member expedition, before the crew size increased to six crew members with...
and 20
Expedition 20
Expedition 20 was the twentieth long-duration flight to the International Space Station. The expedition marked the first time a six-member crew inhabited the station...
. He commanded the Soyuz TMA-14
Soyuz TMA-14
The Soyuz TMA-14 was a Soyuz flight to the International Space Station, which launched on 26 March 2009. It transported two members of the Expedition 19 crew as well as spaceflight participant Charles Simonyi on his second self-funded flight to the space station...
spacecraft which was launched from Baikonur on March 26, 2009 and docked with the ISS two days later. Padalka also commanded the first six-person space station
Space station
A space station is a spacecraft capable of supporting a crew which is designed to remain in space for an extended period of time, and to which other spacecraft can dock. A space station is distinguished from other spacecraft used for human spaceflight by its lack of major propulsion or landing...
crew (Expedition 20), returning to Earth on October 11, 2009.

As of June 2010, Gennady Padalka has participated in eight spacewalks.

On September 15, 1998, Padalka performed the spacewalk of his career during a stay aboard Mir along with Sergei Avdeyev. After donning spacesuits, the PKhO compartment of the Mir Core Module
Mir Core Module
Mir , DOS-7, was the first module of the Soviet/Russian Mir space station complex, in low Earth orbit from 1986 to 2001. Generally referred to as either the core module or base block, the module was launched on 20 February 1986 on a Proton-K rocket from LC-200/39 at the Baikonur Cosmodrome...
was depressurized and the spacewalkers entered the dead Spektr
Spektr
Spektr was the fifth module of the Mir Space Station. The module was designed for remote observation of Earth's environment containing atmospheric and surface research equipment...
module at 20:00 GMT. The crew reconnected some cables for the solar panel steering mechanism and closed the hatch a half hour later. The PKhO was then repressurized after a spacewalk which lasted 30 minutes.

On November 10, 1998, Padalka and Avdeyev again ventured out into space. The two made the EVA from the Kvant-2
Kvant-2
Kvant-2 was the third module and second major addition to the Mir space station. Its primary purpose was to deliver new science experiments, better life support systems, and an airlock to Mir. It was launched on November 26, 1989 on a Proton rocket. It docked to Mir on December 6...
airlock on Mir. The starting time of the spacewalk was at 19:24 GMT. The two spacewalking cosmonauts installed a meteoroid detector in for the upcoming Leonid shower, and hand-launched the Sputnik-41 amateur-radio mini-satellite. The space walk concluded at 01:18 GMT on November 11 clocking a total time of 5 hours and 54 minutes.

Padalka's third spacewalk was performed on June 24, 2004 from the ISS's Pirs Docking Compartment. The spacewalk was cut short due to a spacesuit malfunction of his fellow spacewalking partner, NASA astronaut Michael Fincke. After Fincke egressed, within minutes flight controllers noticed a decrease in pressure in his primary oxygen tank. Although the spacewalk was planned for six hours, as a result of the problems it only lasted 14 minutes.

On June 30, 2004, Padalka performed his fourth spacewalk along with astronaut Michael Fincke. The duo successfully and repaired a faulty circuit breaker on the space station an hour ahead of the schedule. During their repair job, the two spacewalkers replaced a failed device called a remote power control module (RPCM) that had cut off power to its gyroscope. The spacewalk lasted 5 hours and 40 minutes.
On August 3, 2004 Gennady Padalka and Mike Fincke again left the space station to install communications gear and replace space exposure experiments on the outside of the Zvezda Service Module. The spacewalk was conducted from the Pirs Docking Compartment airlock and commenced when Padalka and Fincke opened the outer hatch of the airlock at 6:58 GMT. During the spacewalk the two spacewalkers removed six obsolete laser reflectors used for docking and replaced four of them with more newer versions. The crew also installed two antennas to allow the Automated Transfer Vehicle
Automated Transfer Vehicle
The Automated Transfer Vehicle or ATV is an expendable, unmanned resupply spacecraft developed by the European Space Agency . ATVs are designed to supply the International Space Station with propellant, water, air, payload and experiments...
(ATV) to communicate with the space station and removed a cable from a faulty television camera. The 4 hour 20 minute excursion out of the ISS marked Padalka's fifth career spacewalk.

Padalka completed his sixth career spacewalk on September 3, 2004 when he and Mike Fincke ventured out into space. The spacecraft took place outside of the Zvezda module. Padalka and Fincke began the spacewalk at 16:43 GMT, after emerging from the Pirs airlock. On the Zarya module, the two spacwalkers replaced a pump control panel that measures the module's coolant levels. They also installed three communications antennas at its aft end of the Zvezda module. The spacewalk lasted 5 hours and 21 minutes.

Padalka completed his seventh career spacewalk on June 5, 2009. He and NASA astronaut Michael Barratt
Michael R. Barratt
Michael Reed Barratt is an American physician and a NASA astronaut. Specializing in aerospace medicine, Barratt served as a flight surgeon for NASA before his selection as an astronaut, and has played a role in developing NASA's space medicine programs for both the Shuttle-Mir Program and...
egressed outside the ISS beginning at 7:52 UTC to install docking system antennas and cabling to accommodate the Mini Research Module 2 (MRM-2). The spacewalk began at an hour behind schedule because of higher than expected carbon-dioxide levels in the spacesuits. The spacewalk ended when the two crew members returned to the Pirs Docking Compartment airlock at 12:46 GMT. The spacewalk lasted 4 hours and 54 minutes.

On June 10, 2009 Gennady Padalka and Michael Barratt entered the transfer compartment in the Zvezda module. The "internal spacewalk" began 10 minutes behind schedule because of initial problems with pressure inside the airlock, which did not fall as fast as expected. While they were not in open space outside the ISS, Padalka and Barratt had to wear space suits in the depressurized compartment. During the 12 minute spacewalk the two crew members moved a docking mechanism to accommodate the MRM-2. The event marked the eight career spacewalk for Padalka.
The source of this article is wikipedia, the free encyclopedia.  The text of this article is licensed under the GFDL.