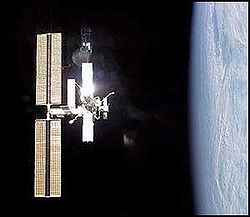 An international crew of three were the fourth crew to live aboard the International Space Station. The team was led by Russian Yuri I. Onufrienko and joined by American crewmates Daniel W. Bursch and Carl E. Walz, both flight engineers. As a part of the STS-108 mission, Endeavour delivered the Expedition 4 crew to the station. They returned to Earth 19 June 2002, aboard Space Shuttle Endeavour following the STS-111 mission.