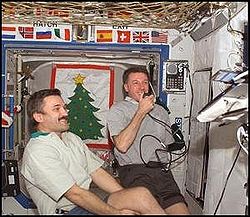 Expedition 8 Commander and NASA Station Science Officer Michael Foale, Flight Engineer Alexander Kaleri and ESA
European Space Agency
The European Space Agency , established in 1975, is an intergovernmental organisation dedicated to the exploration of space, currently with 18 member states...
Astronaut Pedro Duque
Pedro Duque
Pedro Duque Duque is a Spanish astronaut and a veteran of two space missions.Duque earned a degree in Aeronautical Engineering from the Universidad Politécnica de Madrid in 1986. He worked for GMV and for the European Space Agency for six years before being selected as an astronaut candidate in...
docked the Soyuz TMA-3
Soyuz TMA-3
-Mission parameters:*Mass: ? kg*Perigee: 193 km*Apogee: 227 km*Inclination: 51.7°*Period: 88.6 min-Docking with ISS:*Docked to ISS: October 20, 2003, 07:16 UTC...
with the International Space Station at 07:15:58 UTC on 20 October 2003. At the time of docking, both spacecraft orbited the Earth above Russia.

Once the Expedition 7 crew undocked, Foale and Kaleri settled down to work, beginning a more than six-month stint focused on Station operations and maintenance.

The new Station crew, along with Duque, launched from the Baikonur Cosmodrome in Kazakhstan at 05:38:03 UTC, on 18 October 2003.

The Expedition 8 crew conducted the first two-person spacewalk
Extra-vehicular activity
Extra-vehicular activity is work done by an astronaut away from the Earth, and outside of a spacecraft. The term most commonly applies to an EVA made outside a craft orbiting Earth , but also applies to an EVA made on the surface of the Moon...
at the International Space Station. Unlike previous spacewalks conducted by ISS crews, there was not a crewmember inside the Station as the spacewalkers worked outside. The spacewalk was based out of the Pirs docking compartment; the spacewalkers wore Russian Orlan space suits.

This was the 52nd spacewalk devoted to Space Station assembly, operations and maintenance, bringing the cumulative total to 322 hours and 32 minutes. It was the 27th based out of the Station, bringing the total to 155 hours and 17 minutes.