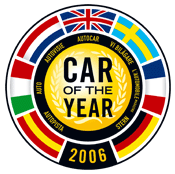 The European Car of the Year
Car of the Year
Car of the Year is a phrase usually considered to have been invented by Motor Trend magazine in the 1950s for their annual award for best American automobile...
award was established in 1964 by a collective of automobile magazine
Magazine
Magazines, periodicals, glossies or serials are publications, generally published on a regular schedule, containing a variety of articles. They are generally financed by advertising, by a purchase price, by pre-paid magazine subscriptions, or all three...
s from different countries in Europe
Europe
Europe is, by convention, one of the world's seven continents. Comprising the westernmost peninsula of Eurasia, Europe is generally 'divided' from Asia to its east by the watershed divides of the Ural and Caucasus Mountains, the Ural River, the Caspian and Black Seas, and the waterways connecting...
. The current organisers of the award are Auto (Italy
Italy
Italy , officially the Italian Republic languages]] under the European Charter for Regional or Minority Languages. In each of these, Italy's official name is as follows:;;;;;;;;), is a unitary parliamentary republic in South-Central Europe. To the north it borders France, Switzerland, Austria and...
), Autocar
Autocar
Autocar is a weekly British automobile magazine published by Haymarket Motoring Publications Ltd. It refers to itself as "The World's oldest car magazine".-History:...
(UK
United Kingdom
The United Kingdom of Great Britain and Northern IrelandIn the United Kingdom and Dependencies, other languages have been officially recognised as legitimate autochthonous languages under the European Charter for Regional or Minority Languages...
), Autopista (Spain
Spain
Spain , officially the Kingdom of Spain languages]] under the European Charter for Regional or Minority Languages. In each of these, Spain's official name is as follows:;;;;;;), is a country and member state of the European Union located in southwestern Europe on the Iberian Peninsula...
), Autovisie (Netherlands
Netherlands
The Netherlands is a constituent country of the Kingdom of the Netherlands, located mainly in North-West Europe and with several islands in the Caribbean. Mainland Netherlands borders the North Sea to the north and west, Belgium to the south, and Germany to the east, and shares maritime borders...
), L'Automobile Magazine (France
France
The French Republic , The French Republic , The French Republic , (commonly known as France , is a unitary semi-presidential republic in Western Europe with several overseas territories and islands located on other continents and in the Indian, Pacific, and Atlantic oceans. Metropolitan France...
), Stern
Stern (magazine)
Stern is a weekly news magazine published in Germany. It was founded in 1948 by Henri Nannen, and is currently published by Gruner + Jahr, a subsidiary of Bertelsmann. In the first quarter of 2006, its print run was 1.019 million copies and it reached 7.84 million readers according to...
(Germany
Germany
Germany , officially the Federal Republic of Germany , is a federal parliamentary republic in Europe. The country consists of 16 states while the capital and largest city is Berlin. Germany covers an area of 357,021 km2 and has a largely temperate seasonal climate...
) and Vi Bilägare
Vi Bilägare
Vi Bilägare is probably the biggest automobile magazine in Sweden. The magazine was launched in 1930 and is currently being published 18 times a year. Typical content includes automotive news and reports, new and used car reviews, test drives, DIY guides and automotive-related product tests....
(Sweden
Sweden
Sweden , officially the Kingdom of Sweden , is a Nordic country on the Scandinavian Peninsula in Northern Europe. Sweden borders with Norway and Finland and is connected to Denmark by a bridge-tunnel across the Öresund....
).

The voting jury
Jury
A jury is a sworn body of people convened to render an impartial verdict officially submitted to them by a court, or to set a penalty or judgment. Modern juries tend to be found in courts to ascertain the guilt, or lack thereof, in a crime. In Anglophone jurisdictions, the verdict may be guilty,...
consists of motoring journalist
Journalist
A journalist collects and distributes news and other information. A journalist's work is referred to as journalism.A reporter is a type of journalist who researchs, writes, and reports on information to be presented in mass media, including print media , electronic media , and digital media A...
s from publications throughout Europe. Representation from each country is based on the size of the country's car market and car manufacturing industry. The jury for 2006 consisted of 58 members from 22 countries.

There are no categories or class winners — the stated objective is to find a "single, decisive winner" among all competing cars.

Eligible cars are new models released in the twelve months prior to the award. The award is not restricted to European cars, but nominees must be available in at least five European countries, and have expected sales of 5,000 a year.

A shortlist of seven cars is selected by a simple vote. For the final round of voting, each jury member has 25 points to distribute among the finalists. The points must be distributed to at least five cars, with no more than ten to any one car, and no joint top marks. The voting is open, and each jury member provides published justification for their vote distribution.

Under these rules, the decisiveness of the victory has varied greatly.

For example, in 1988, the Peugeot 405 won by 212 points, the biggest gap in the history of the European Car of the Year competition. In 2010 the Volkswagen Polo won by a mere 10 points, received maximum points from twenty-five jurors, and was the top choice of 59.