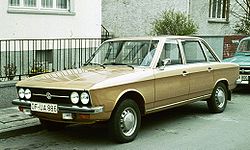 The Volkswagen K70 is a sedan automobile developed by NSU
NSU Motorenwerke AG
NSU Motorenwerke AG, normally just NSU, was a German manufacturer of automobiles, motorcycles and pedal cycles, founded in 1873. It was acquired by Volkswagen Group in 1969...
and sold by Volkswagen
Volkswagen
Volkswagen is a German automobile manufacturer and is the original and biggest-selling marque of the Volkswagen Group, which now also owns the Audi, Bentley, Bugatti, Lamborghini, SEAT, and Škoda marques and the truck manufacturer Scania.Volkswagen means "people's car" in German, where it is...
from 1970 until February 1975. The K70 was the first VW to have a front-mounted watercooled engine and the first to have front wheel drive.


Development as an NSU

Designed by Claus Luthe
Claus Luthe
Claus Luthe, was an important German car designer, responsible for the NSU Ro 80 as well as a number of Audi and BMW models...
, the K70 was originally developed by NSU as a smaller brother to the more famous Ro 80
NSU Ro 80
The NSU Ro 80 was a technologically advanced large sedan-type automobile produced by the German firm of NSU from 1967 until 1977. Most notable was the powertrain; a , 995 cc twin-rotor Wankel engine driving the front wheels through a semi-automatic transmission employing an innovative vacuum system...
, the main difference being that the K70 used a conventional piston engine instead of the Ro80's more complicated Wankel rotary engine. The name "K70" referred to the fact that the engine had a power output of 70 PS, the "K" denoting the German word "Kolben", meaning piston, in contrast to the "Ro" denoting the Ro 80's rotary engine.


Postponed launch as a Volkswagen

NSU scheduled the car's press launch for March 1969, intending to present it to the wider public at the Geneva Motor Show of that year. However, just as the car was about to be launched, well founded rumors appeared concerning the then imminent take over of cash strapped NSU by Volkswagen: even before the take over had been made public, the K70's future was threatened by management concerns that the K70 was too close in size and price to the recently launched Audi 100. Plans for the K70 launch were at the last minute deferred, with rumors that Volkswagen personnel removed the K70 from NSU's show stand on the eve of the show. Rumours of the 'merger' reflected a reality endorsed at a special NSU shareholders' meeting that took place on 26 April 1969 and which backed the arrangement whereby NSU took over Auto Union
Auto Union
Auto Union was an amalgamation of four German automobile manufacturers, founded in 1932 and established in 1936 in Chemnitz, Saxony, during the Great Depression. The company has evolved into present day Audi, as a subsidiary of Volkswagen Group....
in return for an increase in the NSU share capital issued to Volkswagen. The reality was a take over of NSU by Volkswagen, and during 1969 the Neckarsulm company was integrated with Auto Union, which Volkswagen had acquired from Daimler Benz in 1964 - in turn creating the basis of the modern day Audi
Audi
Audi AG is a German automobile manufacturer, from supermini to crossover SUVs in various body styles and price ranges that are marketed under the Audi brand , positioned as the premium brand within the Volkswagen Group....
company which has evolved to the present day.

VW was nevertheless in desperate need of a new family sedan to replace the commercially unsuccessful Type 4
Volkswagen Type 4
The Volkswagen Type 4 is a mid-sized car manufactured and marketed by Volkswagen of Germany from 1968-1974 in two-door and four-door sedan as well as two-door station wagon body styles...
, which itself had been intended as a move upmarket for the Type 1
Volkswagen Beetle
The Volkswagen Type 1, widely known as the Volkswagen Beetle or Volkswagen Bug, is an economy car produced by the German auto maker Volkswagen from 1938 until 2003...
-based cars. Thinking that the K70, featuring front wheel drive and modern styling, was the perfect way to transform its image, the Wolfsburg
Wolfsburg
Wolfsburg is a town in Lower Saxony, Germany. It is located on the River Aller northeast of Braunschweig , and is mainly notable as the headquarters of Volkswagen AG...
firm quickly scrapped publicity material showing the K70 badged as an NSU, and just over a year later the sedan instead went into production not at Neckarsulm
Neckarsulm
Neckarsulm is a city in northern Baden-Württemberg, Germany, near Stuttgart, and part of the district Heilbronn. As of 2004, Neckarsulm had 27,296 inhabitants....
, but at Volkswagen's new Salzgitter
Salzgitter
Salzgitter is an independent city in southeast Lower Saxony, Germany, located between Hildesheim and Braunschweig. Together with Wolfsburg and Braunschweig, Salzgitter is one of the seven Oberzentren of Lower Saxony...
plant. Now branded as a Volkswagen, the K70 finally started coming of the production line with little fanfare in August 1970, and was launched in export markets during the ensuing months. A launch date for the wagon / estate version, already delayed, was further deferred - indefinitely as it turned out.

The K70 as launched featured a four-cylinder water-cooled engine: this was a development from the four-cylinder engine mounted in the rear of the NSU 1200, its displacement increased to 1605 cc. Despite reports that the car's name reflected an output of 70 PS, the car at launched boasted a claimed 75 PS. The engine was longitudinally mounted, well forward and placed directly above the differential, between the front wheels, and canted to the right. The clutch and gear box were directly behind the differential, and the three comprised a compact package which necessitated a relatively high bonnet / hood but which also maximised the proportion of the car's weight carried by the front wheels, and the space available for passengers and their luggage, characteristics that the K70 shared with the NSU Ro 80. Despite this arrangement, accessing or replacing the clutch was possible, using a service ramp, without any need to move the engine or gear box.

Unfashionably tall by contemporary standards, the K70 also benefited from the space saving characteristics of its front wheel drive layout and compact engine installation. The boxy cabin was unusually spacious and the luggage capacity class leading. The driver sat slightly higher than in competitor vehicles and the large window area conferred above average all-round visibility. The relatively large glass area also led to the car carrying an above average proportion of its weight above waist height, however, rendering a wide track particularly important in order to ensure lateral stability.

The 1960s was a decade when forward looking manufacturers were highlighting secondary safety features. Those on the K70 included a fuel tank mounted directly ahead of the rear axle and boot/trunk, and within the wheelbase. As publicity for the Mercedes-Benz S Class would stress when that car was launched in 1972, this was the least vulnerable position in terms of the risk of the fuel tank being punctured in the event of a crash. The steering column was angled in order to reduce the risk of its being pushed too far back into the passenger cabin, and while seat belt
Seat belt
A seat belt or seatbelt, sometimes called a safety belt, is a safety harness designed to secure the occupant of a vehicle against harmful movement that may result from a collision or a sudden stop...
s were an optional extra, at least on the domestic market, mounting points for them were standard.

For the Volkswagen dealership network, their staff trained over many years to promote and service rear-engined air-cooled cars, the appearance at relatively short notice of the water-cooled front-engined K70 presented a challenge. Although the car was priced below the Audi 100, there was an unavoidable overlap in the market place with the Volkswagen 411. Despite the different badging, some potential buyers may have tarred the K70 with the same brush as its unreliable NSU Ro 80 sister car, leading to poor sales.

The K70 was replaced in 1973 by the Audi
Audi
Audi AG is a German automobile manufacturer, from supermini to crossover SUVs in various body styles and price ranges that are marketed under the Audi brand , positioned as the premium brand within the Volkswagen Group....
-based Volkswagen Passat
Volkswagen Passat
The Volkswagen Passat is a large family car marketed by Volkswagen Passenger Cars through six design generations since 1973. Between the Volkswagen Golf / Volkswagen Jetta and the Volkswagen Phaeton in the current Volkswagen line-up, the Passat and its derivatives have been badged variously as...
, although it continued in production until February 1975, by which time Volkswagen had produced 210,082 K70s before the car was withdrawn. An alternative source gives the production total of the K70 as 211,127.