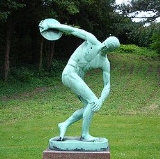 Encyclopedia
The discus throw is an event in track and field athletics competition, in which an athlete throws a heavy disc
Disk (mathematics)
In geometry, a disk is the region in a plane bounded by a circle.A disk is said to be closed or open according to whether or not it contains the circle that constitutes its boundary...
—called a discus—in an attempt to mark a farther distance than his or her competitors. It is an ancient
Classical antiquity
Classical antiquity is a broad term for a long period of cultural history centered on the Mediterranean Sea, comprising the interlocking civilizations of ancient Greece and ancient Rome, collectively known as the Greco-Roman world...
sport, as evidenced by the 5th century BC Myron
Myron
Myron of Eleutherae working circa 480-440 BC, was an Athenian sculptor from the mid-5th century BC. He was born in Eleutherae on the borders of Boeotia and Attica. According to Pliny's Natural History, Ageladas of Argos was his teacher....
statue, Discobolus
Discobolus
The Discobolus of Myron is a famous Greek sculpture that was completed towards the end of the Severe period, circa 460-450 BC. The original Greek bronze is lost...
. Although not part of the modern pentathlon
Modern pentathlon
The modern pentathlon is a sports contest that includes five events: pistol shooting, épée fencing, 200 m freestyle swimming, show jumping, and a 3 km cross-country run...
, it was one of the events of the ancient pentathlon
Pentathlon
A pentathlon is a contest featuring five different events. The name is derived from Greek: combining the words pente and -athlon . The first pentathlon was documented in Ancient Greece and was part of the Ancient Olympic Games...
, which can be dated at least back to 708 BC.

The women's competition was added to the Olympic program in the 1928 games
1928 Summer Olympics
The 1928 Summer Olympics, officially known as the Games of the IX Olympiad, was an international multi-sport event which was celebrated in 1928 in Amsterdam, Netherlands. Amsterdam had bid for the 1920 and 1924 Olympic Games, but had to give way to war-victim Antwerp, Belgium, and Pierre de...
, although they had been competing at some national and regional levels previously. 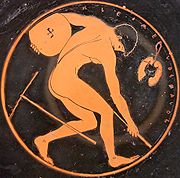 The discus, the object to be thrown, is a heavy lenticular
Lens (geometry)
In geometry, a lens is a biconvex shape comprising two circular arcs, joined at their endpoints. If the arcs have equal radii, it is called a symmetric lens.A concave-convex shape is called a lune...
disc
Disk (mathematics)
In geometry, a disk is the region in a plane bounded by a circle.A disk is said to be closed or open according to whether or not it contains the circle that constitutes its boundary...
with a weight of 2 kilograms (4 lb 7 oz) and diameter of 219–221 mm (8.66 inches) for the men's event, and a weight of 1 kg (2 lb 3 oz) and diameter of 180–182 mm (7.17 inches) for the women's event.

The typical discus has sides made of plastic, wood, fiberglass, carbon fiber or metal with a metal rim and a metal core to attain the weight. The rim must be smooth, with no roughness or finger holds. A discus with more weight in the rim produces greater angular momentum for any given spin rate, and thus more stability, although it is more difficult to throw. However, a higher rim weight, if thrown correctly, can lead to a farther throw. A solid rubber discus is sometimes used (see In the United States).

To make a throw, the competitor starts in a circle of 2.5 metres (8 feet 2½ inches) diameter, which is recessed in a concrete pad by 20 mm. The thrower typically takes an initial stance facing away from the direction of the throw. He then spins counter-clockwise (for right-handers) around one and a half times through the circle to build momentum, then releases his throw. The discus must land within a 34.92-degree sector. The rules of competition for discus are virtually identical to those of shot put
Shot put
The shot put is a track and field event involving "putting" a heavy metal ball—the shot—as far as possible. It is common to use the term "shot put" to refer to both the shot itself and to the putting action....
, except that the circle is larger, a stop board is not used and there are no form rules concerning how the discus is to be thrown.

The distance from the front edge of the circle to where the discus has landed is measured, and distances are rounded down to the nearest centimetre. The competitor's best throw from the allocated number of throws, typically three to six, is recorded, and the competitor who legally throws the discus the farthest is declared the winner. Ties are broken by determining which thrower has the longer second-best throw.

The basic motion is a forehanded sidearm movement. The discus is spun off the index finger or the middle finger of the throwing hand. In flight the disc spins clockwise when viewed from above for a right-handed thrower, and counter-clockwise for a lefty. As well as achieving maximum momentum in the discus on throwing, the discus' distance is also determined by the trajectory the thrower imparts, as well as the aerodynamic behavior of the discus. Generally, throws into a moderate headwind achieve the maximum distance. Also, a faster-spinning discus imparts greater gyroscopic stability. The technique of discus throwing is quite difficult to master and needs lots of experience to get right, thus most top throwers are 30 years old or more.


Phases of the throw 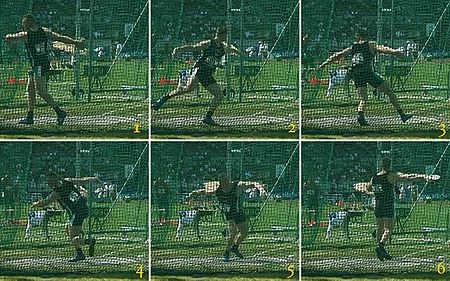 There are six keys movements of the discus throw: wind up, move in rhythm, balance, right leg engine, orbit, and delivery.
The wind up is one of the most important aspects of the throw because it sets the tone for the entire throw. The wind up is both mental and technical. It is mental because the wind up sets you up for the rest of the throw. The following are the technical aspects: flat right foot, on the ball of your left foot, keep your weight evenly distributed between your feet, and do not over do it (being overly active can result in the waste of energy). Although the wind up sets the tone for the entire throw, the rhythm of the throw is the most important aspect. It is necessary to move in rhythm throughout the entire throw. The best throwers contain the same amount of time in each phase while completing a great throw. Focusing on rhythm can bring about the consistency to get in the right positions that many throwers lack. Executing a sound discus throw with solid technique requires perfect balance. This is due to the throw being a linear movement combined with a one and a half rotation and an implement at the end of one arm. Thus, a good discus thrower needs to maintain balance within the circle. It is also important that the discus thrower keeps their shoulders at the same level during the throw until the end, where the thrower must extend their shoulders upward to get good lift under the discus. If extension is executed properly the discus will be at the right angle to ride on the air current and thus be taken a farther distance. 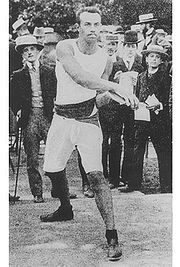 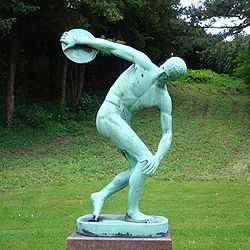 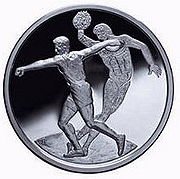 The discus throw is the subject of a number of well-known ancient Greek statues and Roman copies such as the Discobolus
Discobolus
The Discobolus of Myron is a famous Greek sculpture that was completed towards the end of the Severe period, circa 460-450 BC. The original Greek bronze is lost...
and Discophoros
Discophoros
The Discophoros, also spelled Discophorus, was a bronze sculpture by the classical Greek sculptor Polyclitus, creator of the Doryphoros and Diadumenos, and its many Roman marble copies...
.

Discus throwers have been selected as a main motif in numerous collectors' coins. One of the recent samples is the €10 Greek Discus commemorative coin, minted in 2003 to commemorate the 2004 Summer Olympics
2004 Summer Olympics
The 2004 Summer Olympic Games, officially known as the Games of the XXVIII Olympiad, was a premier international multi-sport event held in Athens, Greece from August 13 to August 29, 2004 with the motto Welcome Home. 10,625 athletes competed, some 600 more than expected, accompanied by 5,501 team...
. On the obverse of the coin a modern athlete is seen in the foreground in a half-turned position, while in the background an ancient discus thrower has been captured in a lively bending motion, with the discus high above his head, creating a vivid representation of the sport.

Under US high school rules, if a discus hits the surrounding safety cage and is deflected into the sector, it is ruled a foul. In contrast, under IAAF, WMA
World Masters Athletics
World Masters Athletics is the worldwide governing body for the sport of masters athletics – which includes track and field, cross country, and road running events – as participated by people over 35 years of age....
, NCAA and USATF rules, it is ruled a legal throw. Additionally, under US high school rules, distances thrown are rounded down to the nearest whole inch, rather than the nearest centimetre.

US high school rules allow the use of a solid rubber discus; it is cheaper and easier to learn to throw (due to its more equal distribution of weight, as opposed to the heavy rim weight of the metal rim/core discus), but less durable.