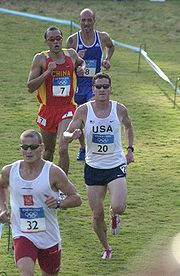 The modern pentathlon is a sport
Sport
A Sport is all forms of physical activity which, through casual or organised participation, aim to use, maintain or improve physical fitness and provide entertainment to participants. Sport may be competitive, where a winner or winners can be identified by objective means, and may require a degree...
s contest that includes five events: pistol shooting, épée fencing, 200 m freestyle swimming
Freestyle swimming
Freestyle is an unregulated swimming style used in swimming competitions according to the rules of FINA. The front crawl stroke is almost universally used during a freestyle race, as this style is generally the fastest...
, show jumping
Show jumping
Show jumping, also known as "stadium jumping," "open jumping," or "jumpers," is a member of a family of English riding equestrian events that also includes dressage, eventing, hunters, and equitation. Jumping classes commonly are seen at horse shows throughout the world, including the Olympics...
, and a 3 km cross-country run
Cross country running
Cross country running is a sport in which people run a race on open-air courses over natural terrain. The course, typically long, may include surfaces of grass and earth, pass through woodlands and open country, and include hills, flat ground and sometimes gravel road...
. The sport is governed by the Union Internationale de Pentathlon Moderne
Union Internationale de Pentathlon Moderne
The International Modern Pentathlon Union , UIPM, is the international governing body of Modern pentathlon. Its headquarters are in Monte-Carlo, Monaco....
(UIPM), the International Modern Pentathlon Union.

The modern pentathlon was invented by the Baron Pierre de Coubertin
Pierre de Coubertin
Pierre de Frédy, Baron de Coubertin was a French educationalist and historian, founder of the International Olympic Committee, and is considered the father of the modern Olympic Games...
, the founder of the modern Olympic Games
Olympic Games
The Olympic Games is a major international event featuring summer and winter sports, in which thousands of athletes participate in a variety of competitions. The Olympic Games have come to be regarded as the world’s foremost sports competition where more than 200 nations participate...
. The name derives from the Greek penta- "five" and -athlon "contest". The addition of modern to the name distinguished it from the original pentathlon of the ancient Olympic Games, which consisted of the stadion foot race, wrestling
Wrestling
Wrestling is a form of grappling type techniques such as clinch fighting, throws and takedowns, joint locks, pins and other grappling holds. A wrestling bout is a physical competition, between two competitors or sparring partners, who attempt to gain and maintain a superior position...
, long jump
Long jump
The long jump is a track and field event in which athletes combine speed, strength, and agility in an attempt to leap as far as possible from a take off point...
, javelin
Javelin throw
The javelin throw is a track and field athletics throwing event where the object to be thrown is the javelin, a spear approximately 2.5 metres in length. Javelin is an event of both the men's decathlon and the women's heptathlon...
, and discus
Discus throw
The discus throw is an event in track and field athletics competition, in which an athlete throws a heavy disc—called a discus—in an attempt to mark a farther distance than his or her competitors. It is an ancient sport, as evidenced by the 5th century BC Myron statue, Discobolus...
. As the events of the ancient pentathlon were modeled after the skills of the ideal soldier of that time, Coubertin created the contest to simulate the experience of a 19th century cavalry
Cavalry
Cavalry or horsemen were soldiers or warriors who fought mounted on horseback. Cavalry were historically the third oldest and the most mobile of the combat arms...
soldier behind enemy lines: he must ride an unfamiliar horse, fight with pistol and sword, swim, and run.

Originally the competition took place over four or five days; however in 1996
Modern pentathlon at the 1996 Summer Olympics
Modern pentathlon at the 1996 Summer Olympics. Team events were eliminated from the 1996 Olympics.-Medal Summary:Individual:-Final Results:-References:*...
a one-day format was adopted in an effort to be more audience-friendly. In spite of the event's strong pedigree in the modern Olympics, and its status as the only event created specifically for the modern Olympic Games, its lack of widespread popularity outside Eastern Europe
Eastern Europe
Eastern Europe is the eastern part of Europe. The term has widely disparate geopolitical, geographical, cultural and socioeconomic readings, which makes it highly context-dependent and even volatile, and there are "almost as many definitions of Eastern Europe as there are scholars of the region"...
has led to calls for its removal from the Olympic Games in recent years; however, a vote by the IOC
International Olympic Committee
The International Olympic Committee is an international corporation based in Lausanne, Switzerland, created by Pierre de Coubertin on 23 June 1894 with Demetrios Vikelas as its first president...
on July 8, 2005, keeps it in the Olympic program at least until 2012
2012 Summer Olympics
The 2012 Summer Olympic Games, officially known as the "London 2012 Olympic Games", are scheduled to take place in London, England, United Kingdom from 27 July to 12 August 2012...
.

Following the July 2011 Modern Pentathlon Olympic test event in London, UIPM president Klaus Schormann told Olympic news source Around the Rings that transportation will be the key issue for the UIPM during the London 2012 Olympics. "The transportation is important to get from the swimming and fencing to here in Greenwich Park," he said. "This should be properly organized, for the athletes but also for the spectators as well.”

Except for the fencing
Fencing
Fencing, which is also known as modern fencing to distinguish it from historical fencing, is a family of combat sports using bladed weapons.Fencing is one of four sports which have been featured at every one of the modern Olympic Games...
competition, athletes do not directly compete against one another in the five events. Instead, a better absolute performance results in a higher points score; points for each event are combined to give the overall total scores. This is similar to the procedure for the decathlon
Decathlon
The decathlon is a combined event in athletics consisting of ten track and field events. The word decathlon is of Greek origin . Events are held over two consecutive days and the winners are determined by the combined performance in all. Performance is judged on a points system in each event, not...
in track and field athletics. However, an innovation was introduced to make the finale of the pentathlon more exciting. The last event is the cross-country run. Competitors are ranked according to their score from the first four disciplines and given different start times, with the leader going first, and other starts staggered by points differential such that the first person to cross the finish line will be the overall points leader and win the pentathlon. This method of finishing the competition would also eventually find use in winter events; the Gundersen method
Gundersen method
The Gundersen method is a method in the Nordic combined developed by Gunder Gundersen, a Nordic combined athlete from Norway, that was first used in the 1980s...
details a means by which a similar finish is achieved in the Nordic combined
Nordic combined
The Nordic combined is a winter sport in which athletes compete in both cross-country skiing and ski jumping.- History :While Norwegian soldiers are known to have been competing in Nordic skiing since the 19th century, the first major competition in Nordic combined was held in 1892 in Oslo at the...
.

The fencing
Fencing
Fencing, which is also known as modern fencing to distinguish it from historical fencing, is a family of combat sports using bladed weapons.Fencing is one of four sports which have been featured at every one of the modern Olympic Games...
discipline uses the épée. The competition is a round-robin
Round-robin tournament
A round-robin tournament is a competition "in which each contestant meets all other contestants in turn".-Terminology:...
, meaning each competitor will face all the other competitors once. Each match lasts up to one minute; the first fencer to score a hit wins instantly. If neither scores within one minute, both lose the match.

The swimming discipline is a 200 m freestyle
Freestyle swimming
Freestyle is an unregulated swimming style used in swimming competitions according to the rules of FINA. The front crawl stroke is almost universally used during a freestyle race, as this style is generally the fastest...
race. Until the 2000 Olympics, the distance was 300 metres. Competitors are seeded in heats according to their fastest time over the distance.

The riding discipline involves show jumping
Show jumping
Show jumping, also known as "stadium jumping," "open jumping," or "jumpers," is a member of a family of English riding equestrian events that also includes dressage, eventing, hunters, and equitation. Jumping classes commonly are seen at horse shows throughout the world, including the Olympics...
over a 350–450 m course with 12 to 15 obstacles. Competitors are paired with horses in a draw 20 minutes before the start of the event.

The shooting discipline involves using a 4.5 mm air pistol in the standing position from 10 metres distance at a stationary target. Until the 2008 rules change, the format was that of the 10 metre air pistol competition: each competitor had 20 shots, with 40 seconds allowed for each shot.

Beginning with the Rancho Mirage World Cup (Feb 2011), the pistols have changed to a laser instead of an actual projectile. There is a slight delay between the trigger pull and the laser firing, simulating the time it would take for a pellet to clear the muzzle.

The running discipline involves a 3 km cross-country
Cross country running
Cross country running is a sport in which people run a race on open-air courses over natural terrain. The course, typically long, may include surfaces of grass and earth, pass through woodlands and open country, and include hills, flat ground and sometimes gravel road...
race. Until the 2000 Olympics
2000 Summer Olympics
The Sydney 2000 Summer Olympic Games or the Millennium Games/Games of the New Millennium, officially known as the Games of the XXVII Olympiad, were an international multi-sport event which was celebrated between 15 September and 1 October 2000 in Sydney, New South Wales, Australia...
, the distance was 4000 metres.

In November 2008, the UIPM voted to change the format from the start of 2009. The running and shooting disciplines are to be contested in tandem. Athletes will have three bouts of shooting each followed by a 1000 m run. This is similar to the biathlon
Biathlon
Biathlon is a term used to describe any sporting event made up of two disciplines. However, biathlon usually refers specifically to the winter sport that combines cross-country skiing and rifle shooting...
at the Winter Olympic Games
Winter Olympic Games
The Winter Olympic Games is a sporting event, which occurs every four years. The first celebration of the Winter Olympics was held in Chamonix, France, in 1924. The original sports were alpine and cross-country skiing, figure skating, ice hockey, Nordic combined, ski jumping and speed skating...
, which combines cross-country skiing
Cross-country skiing
Cross-country skiing is a winter sport in which participants propel themselves across snow-covered terrain using skis and poles...
with rifle shooting. However, whereas biathletes carry their rifles while skiing, pentathletes will not carry their pistols while running. The change has been criticized as altering too radically the nature of the skills required. The New York Times asked whether the name ought to be changed to "tetrathlon" given that two of the five disciplines had been combined into a single event. In the new format, in each of the three rounds of firing, athletes have to shoot five targets, loading the gun after each shot; they may then resume running. Misses are not penalised, but exceeding a maximum total time of 70 seconds will result in a penalty.

The interruption of the pistol shooting will alter the format of the race, but not the principle that the overall winner will be the first to cross the finish line.