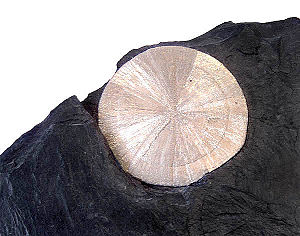 Crystal habit is an overall description of the visible external shape of a mineral. This description can apply to an individual crystal or an assembly of crystals or aggregates.

In mineralogy
Mineralogy
Mineralogy is the study of chemistry, crystal structure, and physical properties of minerals. Specific studies within mineralogy include the processes of mineral origin and formation, classification of minerals, their geographical distribution, as well as their utilization.-History:Early writing...
, shape and size give rise to descriptive terms applied to the typical appearance, or habit of crystal
Crystal
A crystal or crystalline solid is a solid material whose constituent atoms, molecules, or ions are arranged in an orderly repeating pattern extending in all three spatial dimensions. The scientific study of crystals and crystal formation is known as crystallography...
s. Each crystal can be described by how well it is formed, ranging from euhedral
Euhedral
Euhedral crystals are those that are well-formed with sharp, easily recognised faces. Normally, crystals do not form smooth faces or sharp crystal outlines. Many crystals grow from cooling liquid magma...
(perfect to near-perfect), to subhedral (moderately formed), and anhedral (poorly formed to no discernable habit seen).

The many terms used by mineralogists to describe crystal habits are useful in communicating what specimens of a particular mineral
Mineral
A mineral is a naturally occurring solid chemical substance formed through biogeochemical processes, having characteristic chemical composition, highly ordered atomic structure, and specific physical properties. By comparison, a rock is an aggregate of minerals and/or mineraloids and does not...
often look like. Recognizing numerous habits helps a mineralogist to identify a large number of minerals. Some habits are distinctive of certain minerals, although most minerals exhibit many differing habits (the development of a particular habit is determined by the details of the conditions during the mineral formation/crystal growth). Crystal habit may mislead the inexperienced as a mineral's internal crystal system
Crystal structure
In mineralogy and crystallography, crystal structure is a unique arrangement of atoms or molecules in a crystalline liquid or solid. A crystal structure is composed of a pattern, a set of atoms arranged in a particular way, and a lattice exhibiting long-range order and symmetry...
can be hidden or disguised.

Factors influencing a crystal's habit include: a combination of two or more crystal forms; trace impurities present during growth; crystal twinning
Crystal twinning
Crystal twinning occurs when two separate crystals share some of the same crystal lattice points in a symmetrical manner. The result is an intergrowth of two separate crystals in a variety of specific configurations. A twin boundary or composition surface separates the two crystals....
and growth conditions (i.e., heat, pressure, space); and specific growth tendencies like growth striations
Striation (geology)
In geology, a striation means linear furrows generated from fault movement; The striation's direction reveal the movement directions in the fault plane. Similar striations can occur with glaciation....
. Minerals belonging to the same crystal system do not necessarily exhibit the same habit. Some habits of a mineral are unique to its variety and locality: For example, while most sapphire
Sapphire
Sapphire is a gemstone variety of the mineral corundum, an aluminium oxide , when it is a color other than red or dark pink; in which case the gem would instead be called a ruby, considered to be a different gemstone. Trace amounts of other elements such as iron, titanium, or chromium can give...
s form elongate barrel-shaped crystals, those found in Montana
Montana
Montana is a state in the Western United States. The western third of Montana contains numerous mountain ranges. Smaller, "island ranges" are found in the central third of the state, for a total of 77 named ranges of the Rocky Mountains. This geographical fact is reflected in the state's name,...
form stout tabular crystals. Ordinarily, the latter habit is seen only in ruby
Ruby
A ruby is a pink to blood-red colored gemstone, a variety of the mineral corundum . The red color is caused mainly by the presence of the element chromium. Its name comes from ruber, Latin for red. Other varieties of gem-quality corundum are called sapphires...
. Sapphire and ruby are both varieties of the same mineral; corundum
Corundum
Corundum is a crystalline form of aluminium oxide with traces of iron, titanium and chromium. It is a rock-forming mineral. It is one of the naturally clear transparent materials, but can have different colors when impurities are present. Transparent specimens are used as gems, called ruby if red...
.

Some minerals may replace other existing minerals while preserving the original's habit: this process is called pseudomorphous replacement
Pseudomorph
In mineralogy, a pseudomorph is a mineral or mineral compound that appears in an atypical form , resulting from a substitution process in which the appearance and dimensions remain constant, but the original mineral is replaced by another...
. A classic example is tiger's eye
Tiger's eye
Tiger's eye is a chatoyant gemstone that is usually a metamorphic rock that is a golden to red-brown color, with a silky luster. A member of the quartz group, it is a classic example of pseudomorphous replacement by silica of fibrous crocidolite...
quartz
Quartz
Quartz is the second-most-abundant mineral in the Earth's continental crust, after feldspar. It is made up of a continuous framework of SiO4 silicon–oxygen tetrahedra, with each oxygen being shared between two tetrahedra, giving an overall formula SiO2. There are many different varieties of quartz,...
, crocidolite asbestos
Asbestos
Asbestos is a set of six naturally occurring silicate minerals used commercially for their desirable physical properties. They all have in common their eponymous, asbestiform habit: long, thin fibrous crystals...
replaced by silica. While quartz typically forms prismatic (elongate, prism-like) crystals, in tiger's eye the original fibrous habit of crocidolite is preserved.

The names of crystal habits are derived from: