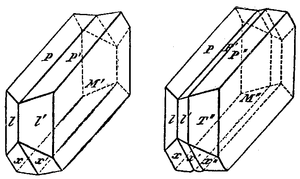 Crystal twinning occurs when two separate crystals share some of the same crystal lattice points in a symmetrical manner. The result is an intergrowth of two separate crystals in a variety of specific configurations. A twin boundary or composition surface separates the two crystals. Crystallographers
Crystallography
Crystallography is the experimental science of the arrangement of atoms in solids. The word "crystallography" derives from the Greek words crystallon = cold drop / frozen drop, with its meaning extending to all solids with some degree of transparency, and grapho = write.Before the development of...
classify twinned crystals by a number of twin laws. These twin laws are specific to the crystal system
Crystal system
In crystallography, the terms crystal system, crystal family, and lattice system each refer to one of several classes of space groups, lattices, point groups, or crystals...
. The type of twinning can be a diagnostic tool in mineral identification.

Simple twinned crystals may be contact twins or penetration twins. Contact twins share a single composition surface often appearing as mirror images across the boundary. Plagioclase
Plagioclase
Plagioclase is an important series of tectosilicate minerals within the feldspar family. Rather than referring to a particular mineral with a specific chemical composition, plagioclase is a solid solution series, more properly known as the plagioclase feldspar series...
, quartz
Quartz
Quartz is the second-most-abundant mineral in the Earth's continental crust, after feldspar. It is made up of a continuous framework of SiO4 silicon–oxygen tetrahedra, with each oxygen being shared between two tetrahedra, giving an overall formula SiO2. There are many different varieties of quartz,...
, gypsum
Gypsum
Gypsum is a very soft sulfate mineral composed of calcium sulfate dihydrate, with the chemical formula CaSO4·2H2O. It is found in alabaster, a decorative stone used in Ancient Egypt. It is the second softest mineral on the Mohs Hardness Scale...
, and spinel
Spinel
Spinel is the magnesium aluminium member of the larger spinel group of minerals. It has the formula MgAl2O4. Balas ruby is an old name for a rose-tinted variety.-Spinel group:...
often exhibit contact twinning. Merohedral twinning occurs when the lattices of the contact twins superimpose in three dimensions, such as by relative rotation of one twin from the other. An example is metazeunerite
Metazeunerite
Metazeunerite is an arsenate mineral with a chemical formula of Cu22·8H2O. The origin of this mineral comes from the dehydration process that metazeunerite must go through, and it’s association with zeunerite. As dehydration occurs, zeunerite loses an electron and is then metamorphosed into...
. In penetration twins the individual crystals have the appearance of passing through each other in a symmetrical manner. Orthoclase
Orthoclase
Orthoclase is an important tectosilicate mineral which forms igneous rock. The name is from the Greek for "straight fracture," because its two cleavage planes are at right angles to each other. Alternate names are alkali feldspar and potassium feldspar...
, staurolite
Staurolite
Staurolite is a red brown to black, mostly opaque, nesosilicate mineral with a white streak.-Properties:It crystallizes in the monoclinic crystal system, has a Mohs hardness of 7 to 7.5 and a rather complex chemical formula: 2Al94O204...
, pyrite
Pyrite
The mineral pyrite, or iron pyrite, is an iron sulfide with the formula FeS2. This mineral's metallic luster and pale-to-normal, brass-yellow hue have earned it the nickname fool's gold because of its resemblance to gold...
, and fluorite
Fluorite
Fluorite is a halide mineral composed of calcium fluoride, CaF2. It is an isometric mineral with a cubic habit, though octahedral and more complex isometric forms are not uncommon...
often show penetration twinning. 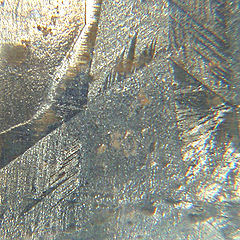 If several twin crystal parts are aligned by the same twin law they are referred to as multiple or repeated twins. If these multiple twins are aligned in parallel they are called polysynthetic twins. When the multiple twins are not parallel they are cyclic twins. Albite
Albite
Albite is a plagioclase feldspar mineral. It is the sodium endmember of the plagioclase solid solution series. As such it represents a plagioclase with less than 10% anorthite content. The pure albite endmember has the formula NaAlSi3O8. It is a tectosilicate. Its color is usually pure white, hence...
, calcite
Calcite
Calcite is a carbonate mineral and the most stable polymorph of calcium carbonate . The other polymorphs are the minerals aragonite and vaterite. Aragonite will change to calcite at 380-470°C, and vaterite is even less stable.-Properties:...
, and pyrite
Pyrite
The mineral pyrite, or iron pyrite, is an iron sulfide with the formula FeS2. This mineral's metallic luster and pale-to-normal, brass-yellow hue have earned it the nickname fool's gold because of its resemblance to gold...
often show polysynthetic twinning. Closely spaced polysynthetic twinning is often observed as striation
Striation
Striations means a series of ridges, furrows or linear marks, and are used in several ways* Glacial striation* Striation , a striation as a result of a geological fault* In medicine, striated muscle...
s or fine parallel lines on the crystal face. Rutile
Rutile
Rutile is a mineral composed primarily of titanium dioxide, TiO2.Rutile is the most common natural form of TiO2. Two rarer polymorphs of TiO2 are known:...
, aragonite
Aragonite
Aragonite is a carbonate mineral, one of the two common, naturally occurring, crystal forms of calcium carbonate, CaCO3...
, cerussite
Cerussite
Cerussite is a mineral consisting of lead carbonate , and an important ore of lead. The name is from the Latin cerussa, white lead. Cerussa nativa was mentioned by Conrad Gessner in 1565, and in 1832 F. S. Beudant applied the name cruse to the mineral, whilst the present form, cerussite, is due to...
, and chrysoberyl
Chrysoberyl
The mineral or gemstone chrysoberyl is an aluminate of beryllium with the formula BeAl2O4. The name chrysoberyl is derived from the Greek words χρυσός chrysos and βήρυλλος beryllos, meaning "a gold-white spar". Despite the similarity of their names, chrysoberyl and beryl are two completely...
often exhibit cyclic twinning, typically in a radiating pattern.

Crystals that grow adjacent to each other may be aligned to resemble twinning. This parallel growth simply reduces system energy and is not twinning.

Twin boundaries occur when two crystal
Crystal
A crystal or crystalline solid is a solid material whose constituent atoms, molecules, or ions are arranged in an orderly repeating pattern extending in all three spatial dimensions. The scientific study of crystals and crystal formation is known as crystallography...
s of the same type intergrow, so that only a slight misorientation exists between them. It is a highly symmetrical interface, often with one crystal the mirror image of the other; also, atoms are shared by the two crystals at regular intervals. This is also a much lower-energy interface than the grain boundaries that form when crystals of arbitrary orientation grow together.

Twin boundaries are partly responsible for shock hardening
Shock hardening
Shock hardening is a process used to strengthen metals and alloys, wherein a shock wave produces atomic-scale defects in the material's crystalline structure. As in cold work, these defects interfere with the normal processes by which metallic materials yield , making materials stiffer, but more...
and for many of the changes that occur in cold work of metals with limited slip systems
Dislocation
In materials science, a dislocation is a crystallographic defect, or irregularity, within a crystal structure. The presence of dislocations strongly influences many of the properties of materials...
or at very low temperatures. They also occur due to martensitic transformations
Martensite
Martensite, named after the German metallurgist Adolf Martens , most commonly refers to a very hard form of steel crystalline structure, but it can also refer to any crystal structure that is formed by displacive transformation. It includes a class of hard minerals occurring as lath- or...
: the motion of twin boundaries is responsible for the pseudoelastic and shape-memory behavior of nitinol, and their presence is partly responsible for the hardness due to quench
Quench
In materials science, quenching is the rapid cooling of a workpiece to obtain certain material properties. It prevents low-temperature processes, such as phase transformations, from occurring by only providing a narrow window of time in which the reaction is both thermodynamically favorable and...
ing of steel
Steel
Steel is an alloy that consists mostly of iron and has a carbon content between 0.2% and 2.1% by weight, depending on the grade. Carbon is the most common alloying material for iron, but various other alloying elements are used, such as manganese, chromium, vanadium, and tungsten...
.

Of the three common crystalline structures BCC, FCC, and HCP, the HCP structure is the most likely to form deformation twins when strained, mainly due to the lack of slip systems in this structure.