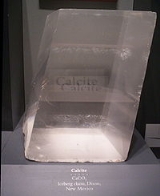 Overview
Calcite is a carbonate mineral
Carbonate minerals
Carbonate minerals are those minerals containing the carbonate ion: CO32-.-Anhydrous carbonates:*Calcite group: Trigonal**Calcite CaCO3**Gaspeite CO3**Magnesite MgCO3**Otavite CdCO3**Rhodochrosite MnCO3**Siderite FeCO3**Smithsonite ZnCO3...
and the most stable polymorph
Polymorphism (materials science)
Polymorphism in materials science is the ability of a solid material to exist in more than one form or crystal structure. Polymorphism can potentially be found in any crystalline material including polymers, minerals, and metals, and is related to allotropy, which refers to chemical elements...
of calcium carbonate
Calcium carbonate
Calcium carbonate is a chemical compound with the formula CaCO3. It is a common substance found in rocks in all parts of the world, and is the main component of shells of marine organisms, snails, coal balls, pearls, and eggshells. Calcium carbonate is the active ingredient in agricultural lime,...
(Ca
Calcium
Calcium is the chemical element with the symbol Ca and atomic number 20. It has an atomic mass of 40.078 amu. Calcium is a soft gray alkaline earth metal, and is the fifth-most-abundant element by mass in the Earth's crust...
C
Carbon
Carbon is the chemical element with symbol C and atomic number 6. As a member of group 14 on the periodic table, it is nonmetallic and tetravalent—making four electrons available to form covalent chemical bonds...
O
Oxygen
Oxygen is the element with atomic number 8 and represented by the symbol O. Its name derives from the Greek roots ὀξύς and -γενής , because at the time of naming, it was mistakenly thought that all acids required oxygen in their composition...
3). The other polymorphs are the minerals aragonite
Aragonite
Aragonite is a carbonate mineral, one of the two common, naturally occurring, crystal forms of calcium carbonate, CaCO3...
and vaterite
Vaterite
Vaterite is a mineral, a polymorph of calcium carbonate. It was named after the German mineralogist Heinrich Vater. It is also known as mu-calcium carbonate and has a JCPDS number of 13-192. Vaterite, like aragonite, is a metastable phase of calcium carbonate at ambient conditions at the surface...
. Aragonite will change to calcite at 380-470°C, and vaterite is even less stable.
Calcite crystal
Crystal
A crystal or crystalline solid is a solid material whose constituent atoms, molecules, or ions are arranged in an orderly repeating pattern extending in all three spatial dimensions. The scientific study of crystals and crystal formation is known as crystallography...
s are trigonal-rhombohedral
Rhombohedral crystal system
In crystallography, the trigonal crystal system is one of the seven crystal systems, and the rhombohedral lattice system is one of the seven lattice systems...
, though actual calcite rhombohedra
Rhombohedron
In geometry, a rhombohedron is a three-dimensional figure like a cube, except that its faces are not squares but rhombi. It is a special case of a parallelepiped where all edges are the same length....
are rare as natural crystals. However, they show a remarkable variety of habits including acute to obtuse rhombohedra, tabular forms, prisms
Prism (geometry)
In geometry, a prism is a polyhedron with an n-sided polygonal base, a translated copy , and n other faces joining corresponding sides of the two bases. All cross-sections parallel to the base faces are the same. Prisms are named for their base, so a prism with a pentagonal base is called a...
, or various scalenohedra
Scalenohedron
In geometry, a scalenohedron is a polyhedron containing three or more pairs of mutually congruent scalene triangles as faces....
.

How do the reactions of the calcite and halite differ?
More