Overview
Geodes are geological
Geology
Geology is the science comprising the study of solid Earth, the rocks of which it is composed, and the processes by which it evolves. Geology gives insight into the history of the Earth, as it provides the primary evidence for plate tectonics, the evolutionary history of life, and past climates...
secondary sedimentary structures which occur in sedimentary and certain volcanic rocks. Geodes are essentially spherical masses of mineral matter that were deposited sygenetically within the rock formations they are found in. Geodes have a Chalcedony shell containing various minerals, usually quartz. Geodes differ from vugs in that they were formed as a separate entity from the surrounding rock, whereas vugs are voids or cavities within a rock formation.

How can geodes be changed in the rock cycle?
More 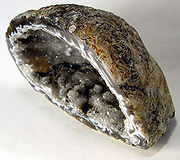 Geodes are geological
Geology
Geology is the science comprising the study of solid Earth, the rocks of which it is composed, and the processes by which it evolves. Geology gives insight into the history of the Earth, as it provides the primary evidence for plate tectonics, the evolutionary history of life, and past climates...
secondary sedimentary structures which occur in sedimentary and certain volcanic rocks. Geodes are essentially spherical masses of mineral matter that were deposited sygenetically within the rock formations they are found in. Geodes have a Chalcedony shell containing various minerals, usually quartz. Geodes differ from vugs in that they were formed as a separate entity from the surrounding rock, whereas vugs are voids or cavities within a rock formation. Geodes also differ from "nodules" in that a nodule is a mass of mineral matter that has accreted around the nodule nucleous. Both structures had the minerals contained within deposited from groundwater or hydrothermal processes. The exterior of most geodes generally consists of Chalcedony, a cryptocrystalline form of quartz. Inside the Chalcedony shell many minerals have been found such as Calcite, Pyrite, Kaolinite, Sphalerite, Millerite, Barite, Dolomite, Limonite, Smithsonite, and Quartz, which is by far the most common and abundant mineral found in geodes. Geodes are found mostly in basaltic lavas and Limestones of the Warsaw formation in the Keokuk region near the area where Missouri, Iowa, and Illinois all join together.

Geodes can form in any cavity, but the term is usually reserved for more or less rounded formations in igneous and sedimentary rocks, while the more general term "vug" is applied to cavities in fissures and veins. They can form in gas bubbles in igneous rock
Igneous rock
Igneous rock is one of the three main rock types, the others being sedimentary and metamorphic rock. Igneous rock is formed through the cooling and solidification of magma or lava...
s, such as vesicles in basaltic lavas, or as in the American Midwest, rounded cavities in sedimentary formations. After rock around the cavity hardens, dissolved silicate
Silicate
A silicate is a compound containing a silicon bearing anion. The great majority of silicates are oxides, but hexafluorosilicate and other anions are also included. This article focuses mainly on the Si-O anions. Silicates comprise the majority of the earth's crust, as well as the other...
s and/or carbonate
Carbonate
In chemistry, a carbonate is a salt of carbonic acid, characterized by the presence of the carbonate ion, . The name may also mean an ester of carbonic acid, an organic compound containing the carbonate group C2....
s are deposited on the inside surface. Over time, this slow feed of mineral constituents from groundwater
Groundwater
Groundwater is water located beneath the ground surface in soil pore spaces and in the fractures of rock formations. A unit of rock or an unconsolidated deposit is called an aquifer when it can yield a usable quantity of water. The depth at which soil pore spaces or fractures and voids in rock...
or hydrothermal solutions allows crystals to form inside the hollow chamber. Bedrock containing geodes eventually weathers and decomposes, leaving them present at the surface if they are composed of resistant material such as quartz.

Most geodes contain clear quartz crystals, while others have purple amethyst
Amethyst
Amethyst is a violet variety of quartz often used in jewelry. The name comes from the Ancient Greek ἀ a- and μέθυστος methustos , a reference to the belief that the stone protected its owner from drunkenness; the ancient Greeks and Romans wore amethyst and made drinking vessels of it in the belief...
crystals. Still others can have agate
Agate
Agate is a microcrystalline variety of silica, chiefly chalcedony, characterised by its fineness of grain and brightness of color. Although agates may be found in various kinds of rock, they are classically associated with volcanic rocks and can be common in certain metamorphic rocks.-Etymology...
, chalcedony
Chalcedony
Chalcedony is a cryptocrystalline form of silica, composed of very fine intergrowths of the minerals quartz and moganite. These are both silica minerals, but they differ in that quartz has a trigonal crystal structure, while moganite is monoclinic...
, or jasper
Jasper
Jasper, a form of chalcedony, is an opaque, impure variety of silica, usually red, yellow, brown or green in color; and rarely blue. This mineral breaks with a smooth surface, and is used for ornamentation or as a gemstone. It can be highly polished and is used for vases, seals, and at one time for...
banding or crystals such as calcite
Calcite
Calcite is a carbonate mineral and the most stable polymorph of calcium carbonate . The other polymorphs are the minerals aragonite and vaterite. Aragonite will change to calcite at 380-470°C, and vaterite is even less stable.-Properties:...
, dolomite
Dolomite
Dolomite is a carbonate mineral composed of calcium magnesium carbonate CaMg2. The term is also used to describe the sedimentary carbonate rock dolostone....
, celestite
Celestite
Celestine or celestite is a mineral consisting of strontium sulfate. The mineral is named for its occasional delicate blue color.-Occurrence:Celestine occurs as crystals, and also in compact massive and fibrous forms...
, etc. There is no easy way of telling what the inside of a geode holds until it is cut open or broken apart. However, geodes from any one locality usually have a more restricted variety of interior mineralization.

Geodes and geode slices are sometimes dyed with artificial colors. Samples of geodes with unusual colors or highly unlikely formations have usually been synthetically altered.

Geodes are common in some formations in the United States
United States
The United States of America is a federal constitutional republic comprising fifty states and a federal district...
(mainly in Indiana
Indiana
Indiana is a US state, admitted to the United States as the 19th on December 11, 1816. It is located in the Midwestern United States and Great Lakes Region. With 6,483,802 residents, the state is ranked 15th in population and 16th in population density. Indiana is ranked 38th in land area and is...
, Iowa
Iowa
Iowa is a state located in the Midwestern United States, an area often referred to as the "American Heartland". It derives its name from the Ioway people, one of the many American Indian tribes that occupied the state at the time of European exploration. Iowa was a part of the French colony of New...
, Missouri
Missouri
Missouri is a US state located in the Midwestern United States, bordered by Iowa, Illinois, Kentucky, Tennessee, Arkansas, Oklahoma, Kansas and Nebraska. With a 2010 population of 5,988,927, Missouri is the 18th most populous state in the nation and the fifth most populous in the Midwest. It...
, Kentucky
Kentucky
The Commonwealth of Kentucky is a state located in the East Central United States of America. As classified by the United States Census Bureau, Kentucky is a Southern state, more specifically in the East South Central region. Kentucky is one of four U.S. states constituted as a commonwealth...
, and Utah
Utah
Utah is a state in the Western United States. It was the 45th state to join the Union, on January 4, 1896. Approximately 80% of Utah's 2,763,885 people live along the Wasatch Front, centering on Salt Lake City. This leaves vast expanses of the state nearly uninhabited, making the population the...
). They also are common in Brazil
Brazil
Brazil , officially the Federative Republic of Brazil , is the largest country in South America. It is the world's fifth largest country, both by geographical area and by population with over 192 million people...
, Namibia
Namibia
Namibia, officially the Republic of Namibia , is a country in southern Africa whose western border is the Atlantic Ocean. It shares land borders with Angola and Zambia to the north, Botswana to the east and South Africa to the south and east. It gained independence from South Africa on 21 March...
, and Mexico
Mexico
The United Mexican States , commonly known as Mexico , is a federal constitutional republic in North America. It is bordered on the north by the United States; on the south and west by the Pacific Ocean; on the southeast by Guatemala, Belize, and the Caribbean Sea; and on the east by the Gulf of...
. A large geode was discovered in Put-in-Bay, Ohio
Put-in-Bay, Ohio
Put-in-Bay is a village located on South Bass Island in Put-in-Bay Township, Ottawa County, Ohio, United States. Many believe that the name originates from some early maps of South Bass Island that showed the harbor being named Pudding Bay, probably because it was shaped like a pudding sack. The...
in the early 20th century. It is known as Crystal Cave
Crystal Cave (Ohio)
The Crystal Cave is a limestone cave located in Put-in-Bay, Ohio, a small town on South Bass Island in Lake Erie, with walls that display large crystals. It is also the world's largest known geode....
, and tours are possible during the summer. In 1967, Iowa designated the geode as the official state rock, and it has a Geode State Park
Geode State Park
Geode State Park is a state park of Iowa, USA, border Henry County and Des Moines County It is managed by the Iowa Department of Natural Resources. While it is named for Iowa's state rock, the geode , few can be found in the park. A display of geodes, with their mysterious crystal formations in...
.

In 2000, a team of geologists found a cave filled with giant gypsum crystals in an abandoned silver mine near Almería
Almería
Almería is a city in Andalusia, Spain, on the Mediterranean Sea. It is the capital of the province of the same name.-Toponym:Tradition says that the name Almería stems from the Arabic المرية Al-Mariyya: "The Mirror", comparing it to "The Mirror of the Sea"...
, Spain
Spain
Spain , officially the Kingdom of Spain languages]] under the European Charter for Regional or Minority Languages. In each of these, Spain's official name is as follows:;;;;;;), is a country and member state of the European Union located in southwestern Europe on the Iberian Peninsula...
. The cavity, which measures 1.8 × 1.7 metres and is 8 metres in length, would be the largest geode ever found. The entrance of the cave has been blocked by five tons of rocks, and is under police protection (to prevent looters from entering). According to geological models, the cave was formed during the Messinian salinity crisis
Messinian salinity crisis
The Messinian Salinity Crisis, also referred to as the Messinian Event, and in its latest stage as the Lago Mare event, was a geological event during which the Mediterranean Sea went into a cycle of partly or nearly complete desiccation throughout the latter part of the Messinian age of the Miocene...
6 million years ago, when the Mediterranean sea evaporated and left thick layers of salt sediments (evaporite
Evaporite
Evaporite is a name for a water-soluble mineral sediment that result from concentration and crystallization by evaporation from an aqueous solution. There are two types of evaporate deposits, marine which can also be described as ocean deposits, and non-marine which are found in standing bodies of...
s). The cave is currently not accessible to tourists.

The Cave of the Crystals is many meters in size, holding gargantuan crystals up to 36 feet in length. It may be composed of additional chambers that are obstructed by the giant crystals, so its total size is currently unknown to researchers.