Its name comes from Arabic رهج الغار rahj al-ġār – 'powder of the mine,' via Catalan
Catalan language
Catalan is a Romance language, the national and only official language of Andorra and a co-official language in the Spanish autonomous communities of Catalonia, the Balearic Islands and Valencian Community, where it is known as Valencian , as well as in the city of Alghero, on the Italian island...
and Medieval Latin
Medieval Latin
Medieval Latin was the form of Latin used in the Middle Ages, primarily as a medium of scholarly exchange and as the liturgical language of the medieval Roman Catholic Church, but also as a language of science, literature, law, and administration. Despite the clerical origin of many of its authors,...
, and its earliest record in English is in the 1390s. 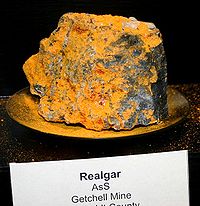 Realgar most commonly occurs as a low-temperature hydrothermal vein
Vein (geology)
In geology, a vein is a distinct sheetlike body of crystallized minerals within a rock. Veins form when mineral constituents carried by an aqueous solution within the rock mass are deposited through precipitation...
mineral associated with other arsenic and antimony minerals. It also occurs as volcanic sublimations and in hot spring
Hot spring
A hot spring is a spring that is produced by the emergence of geothermally heated groundwater from the Earth's crust. There are geothermal hot springs in many locations all over the crust of the earth.-Definitions:...
deposits. It occurs in association with orpiment, arsenolite
Arsenolite
Arsenolite is an arsenic mineral, chemical formula As2O3. It is formed as an oxidation product of arsenic sulfides. Commonly found as small octahedra it is white, but impurities of realgar or orpiment may give it a pink or yellow hue...
, calcite
Calcite
Calcite is a carbonate mineral and the most stable polymorph of calcium carbonate . The other polymorphs are the minerals aragonite and vaterite. Aragonite will change to calcite at 380-470°C, and vaterite is even less stable.-Properties:...
and barite
Barite
Baryte, or barite, is a mineral consisting of barium sulfate. The baryte group consists of baryte, celestine, anglesite and anhydrite. Baryte itself is generally white or colorless, and is the main source of barium...
.

It is found with lead, silver and gold ores in Hungary
Hungary
Hungary , officially the Republic of Hungary , is a landlocked country in Central Europe. It is situated in the Carpathian Basin and is bordered by Slovakia to the north, Ukraine and Romania to the east, Serbia and Croatia to the south, Slovenia to the southwest and Austria to the west. The...
, Bohemia
Bohemia
Bohemia is a historical region in central Europe, occupying the western two-thirds of the traditional Czech Lands. It is located in the contemporary Czech Republic with its capital in Prague...
and Saxony
Saxony
The Free State of Saxony is a landlocked state of Germany, contingent with Brandenburg, Saxony Anhalt, Thuringia, Bavaria, the Czech Republic and Poland. It is the tenth-largest German state in area, with of Germany's sixteen states....
. In the US it occurs notably in Mercur, Utah
Mercur, Utah
Mercur is a historical hard rock mining ghost town located at in Tooele County, Utah, USA. Its elevation from sea level is approximately 2,042m...
; Manhattan, Nevada
Manhattan, Nevada
Manhattan is a small town in Nye County, Nevada located on State Route 377 about 50 miles north of Tonopah, the county seat, off State Route 376....
and in the geyser
Geyser
A geyser is a spring characterized by intermittent discharge of water ejected turbulently and accompanied by a vapour phase . The word geyser comes from Geysir, the name of an erupting spring at Haukadalur, Iceland; that name, in turn, comes from the Icelandic verb geysa, "to gush", the verb...
deposits of Yellowstone National Park
Yellowstone National Park
Yellowstone National Park, established by the U.S. Congress and signed into law by President Ulysses S. Grant on March 1, 1872, is a national park located primarily in the U.S. state of Wyoming, although it also extends into Montana and Idaho...
.

It is commonly held that after a long period of exposure to light realgar changes form to a yellow powder known as pararealgar
Pararealgar
Pararealgar is an arsenic sulfide mineral with the chemical formula As4S4 also represented as AsS. It forms gradually from realgar under exposure to light. Its name derives from the fact that its elemental composition is identical to realgar, As4S4...
(β-As4S4). It was once thought that this powder was the yellow sulfide orpiment
Orpiment
Orpiment, As2S3, is a common monoclinic arsenic sulfide mineral. It has a Mohs hardness of 1.5 to 2 and a specific gravity of 3.46. It melts at 300 °C to 325 °C...
, but has been recently shown to be a distinct chemical compound.

Realgar, orpiment, and arsenopyrite
Arsenopyrite
Arsenopyrite is an iron arsenic sulfide . It is a hard metallic, opaque, steel grey to silver white mineral with a relatively high specific gravity of 6.1. When dissolved in nitric acid, it releases elemental sulfur. When arsenopyrite is heated, it becomes magnetic and gives off toxic fumes...
provide nearly all the world's supply of arsenic
Arsenic
Arsenic is a chemical element with the symbol As, atomic number 33 and relative atomic mass 74.92. Arsenic occurs in many minerals, usually in conjunction with sulfur and metals, and also as a pure elemental crystal. It was first documented by Albertus Magnus in 1250.Arsenic is a metalloid...
as a byproduct of smelting
Smelting
Smelting is a form of extractive metallurgy; its main use is to produce a metal from its ore. This includes iron extraction from iron ore, and copper extraction and other base metals from their ores...
concentrates derived from these ore
Ore
An ore is a type of rock that contains minerals with important elements including metals. The ores are extracted through mining; these are then refined to extract the valuable element....
s.

Realgar was used by firework manufacturers to create the color white in fireworks prior to the availability of powdered metals such as aluminium, magnesium and titanium. It is still used in combination with potassium chlorate
Potassium chlorate
Potassium chlorate is a compound containing potassium, chlorine and oxygen atoms, with the molecular formula KClO3. In its pure form, it is a white crystalline substance. It is the most common chlorate in industrial use...
to make a contact explosive known as "red explosive" for some types of torpedoes and other novelty exploding fireworks, as well in the cores of some types of crackling stars.

Realgar is poisonous. The ancient Greeks, who called it "sandaracha", knew that it was poisonous. It was used to poison rats in medieval Spain and in 16th century England. It is still sometimes used to kill weeds, insects, and rodents, even though more effective arsenic-based agents are available.

Realgar performs corrosive work when put in contact with various substances. It was commonly applied in leather manufacturing to remove the hair from animal pelts, for example. Because realgar is a known carcinogen, and an arsenic poison, and because competitive substitutes are available, it is rarely used today as a corroding agent.

It was, along with orpiment
Orpiment
Orpiment, As2S3, is a common monoclinic arsenic sulfide mineral. It has a Mohs hardness of 1.5 to 2 and a specific gravity of 3.46. It melts at 300 °C to 325 °C...
, a significant item of trade in the ancient Roman Empire
Roman Empire
The Roman Empire was the post-Republican period of the ancient Roman civilization, characterised by an autocratic form of government and large territorial holdings in Europe and around the Mediterranean....
and was used as a red paint pigment
Pigment
A pigment is a material that changes the color of reflected or transmitted light as the result of wavelength-selective absorption. This physical process differs from fluorescence, phosphorescence, and other forms of luminescence, in which a material emits light.Many materials selectively absorb...
and a medicine. It was also used as a medicine in China
China
Chinese civilization may refer to:* China for more general discussion of the country.* Chinese culture* Greater China, the transnational community of ethnic Chinese.* History of China* Sinosphere, the area historically affected by Chinese culture...
and "is made up into household ornaments, such as wine pots, wine cups, images, paperweights, and various other kinds of ornaments and charms, to be kept near at hand in use, or worn about the person, with a view of warding off disease."

Other traditional uses include manufacturing shot, printing and dyeing calico.