Encyclopedia
Feldspars are a group of rock-forming tectosilicate mineral
Mineral
A mineral is a naturally occurring solid chemical substance formed through biogeochemical processes, having characteristic chemical composition, highly ordered atomic structure, and specific physical properties. By comparison, a rock is an aggregate of minerals and/or mineraloids and does not...
s which make up as much as 60% of the Earth
Earth
Earth is the third planet from the Sun, and the densest and fifth-largest of the eight planets in the Solar System. It is also the largest of the Solar System's four terrestrial planets...
's crust
Crust (geology)
In geology, the crust is the outermost solid shell of a rocky planet or natural satellite, which is chemically distinct from the underlying mantle...
.

Feldspars crystal
Crystal
A crystal or crystalline solid is a solid material whose constituent atoms, molecules, or ions are arranged in an orderly repeating pattern extending in all three spatial dimensions. The scientific study of crystals and crystal formation is known as crystallography...
lize from magma
Magma
Magma is a mixture of molten rock, volatiles and solids that is found beneath the surface of the Earth, and is expected to exist on other terrestrial planets. Besides molten rock, magma may also contain suspended crystals and dissolved gas and sometimes also gas bubbles. Magma often collects in...
in both intrusive and extrusive igneous rocks, as veins, and are also present in many types of metamorphic rock
Metamorphic rock
Metamorphic rock is the transformation of an existing rock type, the protolith, in a process called metamorphism, which means "change in form". The protolith is subjected to heat and pressure causing profound physical and/or chemical change...
. Rock formed almost entirely of calcic plagioclase
Plagioclase
Plagioclase is an important series of tectosilicate minerals within the feldspar family. Rather than referring to a particular mineral with a specific chemical composition, plagioclase is a solid solution series, more properly known as the plagioclase feldspar series...
feldspar (see below) is known as anorthosite
Anorthosite
Anorthosite is a phaneritic, intrusive igneous rock characterized by a predominance of plagioclase feldspar , and a minimal mafic component...
. Feldspars are also found in many types of sedimentary rock
Sedimentary rock
Sedimentary rock are types of rock that are formed by the deposition of material at the Earth's surface and within bodies of water. Sedimentation is the collective name for processes that cause mineral and/or organic particles to settle and accumulate or minerals to precipitate from a solution....
.

Feldspar is derived from the German
German language
German is a West Germanic language, related to and classified alongside English and Dutch. With an estimated 90 – 98 million native speakers, German is one of the world's major languages and is the most widely-spoken first language in the European Union....
Feld, "field", and Spath, "a rock
Rock (geology)
In geology, rock or stone is a naturally occurring solid aggregate of minerals and/or mineraloids.The Earth's outer solid layer, the lithosphere, is made of rock. In general rocks are of three types, namely, igneous, sedimentary, and metamorphic...
that does not contain ore
Ore
An ore is a type of rock that contains minerals with important elements including metals. The ores are extracted through mining; these are then refined to extract the valuable element....
". "Feldspathic" refers to materials that contain feldspar. The alternate spelling, felspar, has now largely fallen out of use.

This group of minerals consists of framework tectosilicate
Silicate minerals
The silicate minerals make up the largest and most important class of rock-forming minerals, constituting approximately 90 percent of the crust of the Earth. They are classified based on the structure of their silicate group...
s. Compositions of major elements in common feldspars can be expressed in terms of three endmembers
Endmember (mineralogy)
An endmember in mineralogy is a mineral that is at the extreme end of a mineral series in terms of purity. Minerals often can be described as solid solutions with varying compositions of some chemical elements, rather than as substances with an exact chemical formula...
:

Potassium-Feldspar (K-spar)
Orthoclase
Orthoclase is an important tectosilicate mineral which forms igneous rock. The name is from the Greek for "straight fracture," because its two cleavage planes are at right angles to each other. Alternate names are alkali feldspar and potassium feldspar...
endmember
K
Potassium
Potassium is the chemical element with the symbol K and atomic number 19. Elemental potassium is a soft silvery-white alkali metal that oxidizes rapidly in air and is very reactive with water, generating sufficient heat to ignite the hydrogen emitted in the reaction.Potassium and sodium are...
Al
Aluminium
Aluminium or aluminum is a silvery white member of the boron group of chemical elements. It has the symbol Al, and its atomic number is 13. It is not soluble in water under normal circumstances....
Si
Silicon
Silicon is a chemical element with the symbol Si and atomic number 14. A tetravalent metalloid, it is less reactive than its chemical analog carbon, the nonmetal directly above it in the periodic table, but more reactive than germanium, the metalloid directly below it in the table...
3O
Oxygen
Oxygen is the element with atomic number 8 and represented by the symbol O. Its name derives from the Greek roots ὀξύς and -γενής , because at the time of naming, it was mistakenly thought that all acids required oxygen in their composition...
8

Albite
Albite
Albite is a plagioclase feldspar mineral. It is the sodium endmember of the plagioclase solid solution series. As such it represents a plagioclase with less than 10% anorthite content. The pure albite endmember has the formula NaAlSi3O8. It is a tectosilicate. Its color is usually pure white, hence...
endmember
Na
Sodium
Sodium is a chemical element with the symbol Na and atomic number 11. It is a soft, silvery-white, highly reactive metal and is a member of the alkali metals; its only stable isotope is 23Na. It is an abundant element that exists in numerous minerals, most commonly as sodium chloride...
AlSi3O8

Anorthite
Anorthite
Anorthite is the calcium endmember of plagioclase feldspar. Plagioclase is an abundant mineral in the Earth's crust. The formula of pure anorthite is CaAl2Si2O8.-Mineralogy :...
endmember
Ca
Calcium
Calcium is the chemical element with the symbol Ca and atomic number 20. It has an atomic mass of 40.078 amu. Calcium is a soft gray alkaline earth metal, and is the fifth-most-abundant element by mass in the Earth's crust...
Al2Si2O8

Sanidine is stable at the highest temperatures, and microcline at the lowest. Perthite
Perthite
Perthite is used to describe an intergrowth of two feldspars: a host grain of potassium-rich alkali feldspar includes exsolved lamellae or irregular intergrowths of sodic alkali feldspar . Typically the host grain is orthoclase or microcline, and the lamellae are albite...
is a typical texture in alkali feldspar, due to exsolution of contrasting alkali feldspar compositions during cooling of an intermediate composition. The perthitic textures in the alkali feldspars of many granite
Granite
Granite is a common and widely occurring type of intrusive, felsic, igneous rock. Granite usually has a medium- to coarse-grained texture. Occasionally some individual crystals are larger than the groundmass, in which case the texture is known as porphyritic. A granitic rock with a porphyritic...
s can be seen with the naked eye. Microperthitic textures in crystals are visible using a light microscope, whereas cryptoperthitic textures can be seen only with an electron microscope.

Intermediate compositions of plagioclase feldspar also may exsolve to two feldspars of contrasting composition during cooling, but diffusion is much slower than in alkali feldspar, and the resulting two-feldspar intergrowths typically are too fine-grained to be visible with optical microscopes. The immiscibility gaps in the plagioclase solid solution
Solid solution
A solid solution is a solid-state solution of one or more solutes in a solvent. Such a mixture is considered a solution rather than a compound when the crystal structure of the solvent remains unchanged by addition of the solutes, and when the mixture remains in a single homogeneous phase...
are complex compared to the gap in the alkali feldspars. The play of colours visible in some feldspar of labradorite composition is due to very fine-grained exsolution lamellae.

The barium feldspars are monoclinic and comprise the following: 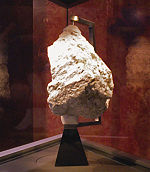 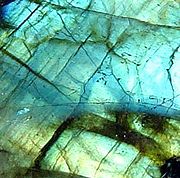 Feldspar is a common raw material used in glassmaking, ceramics, and to some extent as a filler and extender in paint, plastics, and rubber. In glassmaking, alumina from feldspar improves
product hardness, durability, and resistance to chemical corrosion. In ceramics, the alkalis in feldspar (calcium oxide
Calcium oxide
Calcium oxide , commonly known as quicklime or burnt lime, is a widely used chemical compound. It is a white, caustic, alkaline crystalline solid at room temperature....
, potassium oxide
Potassium oxide
Potassium oxide is an ionic compound of potassium and oxygen. This pale yellow solid, the simplest oxide of potassium, is a rarely encountered, highly reactive compound...
, and sodium oxide
Sodium oxide
Sodium oxide is a chemical compound with the formula Na2O. It is used in ceramics and glasses, though not in a raw form. Treatment with water affords sodium hydroxide....
) act as a flux, lowering the melting temperature of a mixture. Fluxes melt at an early stage in the firing process, forming a glassy matrix that bonds the other components of the system together. In the US, about 66% of feldspar is consumed in glassmaking, including glass containers and glass fiber. Pottery (including electrical insulators, sanitaryware, tableware, and tile) and other uses, such as fillers, accounted for the remainder.

In earth sciences and archaeology, feldspars are used for K-Ar dating, argon-argon dating
Argon-argon dating
Argon-argon dating is a radiometric dating method invented to supersede potassium-argon dating in accuracy. The older method required two samples for dating while the newer method requires only one...
, thermoluminescence dating
Thermoluminescence dating
Thermoluminescence dating is the determination, by means of measuring the accumulated radiation dose, of the time elapsed since material containing crystalline minerals was either heated or exposed to sunlight...
and optical dating
Optical dating
Optical dating is a method of determining how long ago minerals were last exposed to daylight. It is useful to geologists and archaeologists who want to know when such an event occurred....
.